Back to Profile Gallery > Halbouty Energy 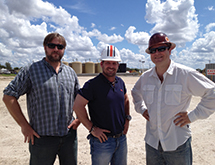 It is rare when an innovation comes along and causes a ripple effect in its business, but Halbouty Energy is poised to do just that with its Paraflow product, President Michel Halbouty Hewitt says. “[It is] a one-size-fits-all solution that will revolutionize the entire industry,” he declares.

Based in Houston, Halbouty Energy specializes in specialty petrochemicals for oil and gas firms. “The Halbouty name has been synonymous with the oil industry for a long time,” Hewitt says.

His grandfather, Michel T. Halbouty, started the company in the 1930s. “He was one of the original wildcatters,” Hewitt says. “He was on the exploration side of things for his entire career.”

But after his death in 2004, the company became dormant. When Michel Hewitt took over leadership of the firm, he sought to rejuvenate it.

He moved back to Houston from London and started the company back up in 2010. “The plan was to get in on the exploration side of things and to carry on that torch that he started,” he recalls.

Unfortunately, the conditions left by the then-recent economic crash did not make that easy. “Banks wouldn’t lend me money,” he recalls. “It was hard to go out and get that capital.”

Hewitt eventually identified a market need for a service company that could provide chemicals and drilling fluids. “[That] was exactly the route we took,” he says. “We got involved with the completion side of things.”

The firm also partnered with Green Stream Solutions, a chemical manufacturer and supplier also based in Houston. “We collectively, as a team, manufacture our solutions with them,” Hewitt says.

One Solution
Skye Petroleum, a firm also based in Houston, developed Halbouty Energy’s Paraflow chemical treatment product, Hewitt says. “They’ve given us free rein on this technology and we’ve become the master distributor for the global market,” he says.

Paraflow, Hewitt explains, eliminates the problem of paraffin deposits for its oil clients. Normally, he says, during the oil production process, paraffin crystalizes into solids when temperatures or pressures drop, causing blockages to form on the walls of pipes and reservoir surfaces.

This is a common industry problem, Hewitt asserts. “Any crude you’re pulling out of the ground you’re going to have paraffin issues with,” he says, noting that companies have spent millions trying to solve this issue. “We have one solution that works globally.”

When its customers use Paraflow at their wellheads, the paraffin crystals do not form and the blockages are eliminated. “They’re able to increase the amount of crude they can put through their systems,” Hewitt says. “Operators will increase their production volume.”

The product also can be used in oil tank storage, Hewitt says. Many facilities that hold millions of barrels of oil experience paraffin and sludge build-up. “We’ve seen some cases of seven feet of sludge,” he says. “You’re talking about losing hundreds of thousands of dollars.”

Embracing Paraflow
Since Halbouty Energy added Paraflow to its product lines, it has been “working with some of the most respected companies globally,” Hewitt says. “We’re headed to Saudi Arabia [and Moscow] next month.”

Thanks to Paraflow, Halbouty Energy also shares an Oil & Gas Awards nomination with Sky Petroleum. “We’re a finalist for New and Innovative Technology,” he states.

Ready for a Boom
Hewitt is proud of his team at Halbouty Energy, including Managing Partner Ross Kennedy. “[He] has been instrumental and was responsible for bringing [Paraflow] to the company,” Hewitt says.

Additionally, “I see Halbouty Energy growing from a small company to an empire,” Hewitt states.