Back to Profile Gallery > Hamon D’Hondt

Today a large manufacturer of air cooled heat exchangers with factories that represent a production capacity of approximately 1500 bundles per year to France, Saudi Arabia and South Korea combined, Hamon D’Hondt’s history dates back to the end of the 19th century.

It was in 1890 that Francois D’Hondt was formed, first specialising in brewery equipment, before moving into the manufacturing of air cooled, and shell and tube heat exchangers for the oil, gas and chemical industries in the 1950s.

“In 1986 D’Hondt joined the Hamon Group, an international organisation specialised in the design and manufacture of thermal systems and heat transfer equipment, officially becoming Hamon D’Hondt,” explains Hervé Le Métayer, sales and development manager of the company. “In recent years the company has expanded its operations further with the opening of a new manufacturing facility in Al Jubail, Saudi Arabia in 2007, which trades under the name Hamon D’Hondt Middle East. This was followed in 2010 with the set up of a joint venture company between Hamon D’Hondt and BHI, located in Haman, South Korea and titled Hamon BHI Company Limited. At the same time, there are other emerging countries that are very active, and which we are looking at. Particularly Russia and the various Gazprom Projects and Petrobras in Brazil, where we have been very successful thus far.”

For companies like Hamon D’Hondt the stark reality is that in recent years a majority of EPC businesses have moved part, if not the vast majority, of their operations away from Europe and the US to the Far East. Such is the strength of this region that at present approximately 80 per cent of the Middle Eastern market is covered by Korean based companies: “The development of Hamon BHI will be hugely important over the next several years for Hamon D’Hondt,” Hervé continues. “In recent years the company has endeavored to establish sales in this part of the world, yet it was hampered by a lack of competitiveness and a local presence that could help bridge the vast cultural differences between European and Korean businesses.

“Utilising a dedicated bay located in Moro the new company carries out the engineering, design, procurement and manufacture of API661 air coolers, supported by its own thermal teams 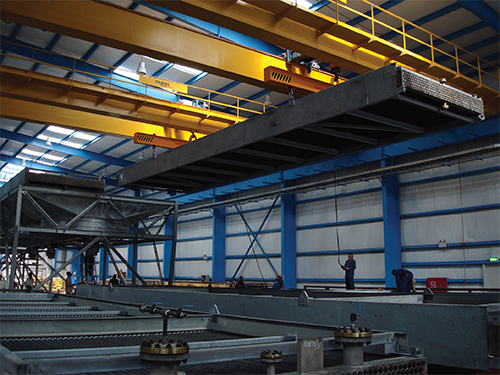 that carry out thermal design, project management and engineering, procurement and administration services. With these capabilities in place the focus now is to significantly increase Hamon BHI’s share of the Korean market to around the 20 per cent mark by the end of 2014, a target that Hamon D’Hondt feels the joint venture is more than capable of achieving.”

The nature of Hamon D’Hondt’s business places the company in a rather unique position where the need to strictly follow the product standards and definitions that fall under API guidelines means there is little room for flexibility in terms of product innovations. What this means, as Hervé goes on to highlight, is that the company’s customers require guarantees of a more fundamental nature: “End users of Hamon D’Hondt products, names like Total, Shell, Aramco and BP to name a few, demand reliability. They want to be sure the product they are receiving will not suffer from problems or faults and carries a significant lifespan. By ensuring this level of reliability is maintained customers are able to remain confident in Hamon D’Hondt’s ability to issue terminal designs that match individual performance needs while meeting all the required specifications.” Like the vast majority of its peers within the industry, Hamon D’Hondt experienced first hand the impact of the financial crisis and global recession that began in 2008. Despite the inevitable negative effects of postponed and cancelled projects the company managed to weather this and is now looking towards the future with renewed optimism: “What the company found during this period of uncertainty was that the best course of action was not to simply localise every aspect of the business in response to changes in market activity,” Hervé states. “By retaining its European centre of excellence whilst establishing its local presence in Korea, Hamon D’Hondt is able to provide its customers with a continued level of European engineering quality whilst remaining competitive in terms of pricing thanks to its Korean presence.

“Over the last five years the company has successfully managed to increase turnover annually by between ten and fifteen per cent and it is a strong belief within Hamon D’Hondt that this is a direct result of having an open mind when it comes to pursuing new business opportunities. Through the combined efforts of its activities in its more traditional markets and its pursuit of a greater share of the Korean market, Hamon D’Hondt is confident that it can continue growing in both size and scope to the point where its annual turnover will hopefully top the 100 million euro mark within two-to-three years.”