Back to Profile Gallery > Hamworthy Moss

From its inception, Hamworthy Moss has been a fixture within the shipyards of Moss, a bustling town located 60 kilometres south of Oslo, Norway: “Throughout its existence the shipyard in Moss has been responsible for building a variety of vessels, including oil and gas tankers,” explains Geir Hellum, managing director of Hamworthy Moss.

“It was during the 1960s and 70s that the work carried out in the yard helped pioneer the development and construction of LPG and LNG carriers. The shipbuilding era in Moss came to an end in 1986.

“The company’s present product line of first class inert gas systems can be also be traced back to the time during which the shipyard of Moss was helping to shape the future of the industry, with the first systems developed and delivered in 1963. In the near 50 years since Hamworthy Moss has evolved, developing from a department that existed solely in, and served only those also based in, the yard itself into a dedicated system supplier serving its customers, predominantly new building yards, on a worldwide basis.”

This worldwide activity today sees the company providing systems and solutions to the marine industry, with activity in recent years coming increasingly from Korean and Chinese yards, and the offshore sector, both in the traditional markets like the North Sea, and those that are now emerging as big players, such as Brazil and countries off the West coast of Africa. Customers in both of these lucrative fields are able to call on Hamworthy Moss to provide them with a range of products including inert gas generation systems, nitrogen generation systems, exhaust gas cleaning systems and after sales services.

More than ten years ago the company undertook a programme of expanding its scrubbing technology services from the marine sector into its oil as gas operations: “This expansion began with the inert gas systems product line and has resulted in a total of 45 different systems now being found onboard FPSOs and FSOs in active service,” Geir continues. “Similar expansion later occurred with the company’s nitrogen generator systems and today ten different systems can be found in use on FPSOs, drilling rigs and drill ships. The process of expanding these services into the oil and gas industry has required some considerable modification work and can be easily differentiated by the fact that the systems supplied to the marine sector are all standardised whereas the company supplies its oil and gas customers with tailor made solutions.” 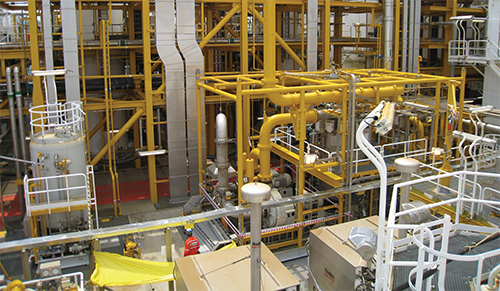 One of the company’s most recent undertakings is the expansion of its range of products for cleaner exploration: “What Hamworthy Moss is doing at this time is developing and delivering a series of products based on its inert gas technology into the expanding exhaust gas cleaning systems,” Geir says. “This market is driven by IMO regulations that were established in October 2008 and are currently being implemented on a large scale. Where the company’s focus lies is with diesel engines and boilers that run on heavy fuel oils. As a result of IMO restrictions on sulphur in exhaust gas, operators have to change from heavy fuel oil to significantly more expensive fuel types like diesel. Where heavy fuel oil can still be used is when exhaust gas is cleaned, reducing sulphur levels to the corresponding levels of diesel fuels. The large price differential, particularly in this current climate, makes this cleaning process a very attractive solution from a financial point of view. At present these systems are focused on cleaning the exhaust gas of sulphur, and as current IMO regulations reach full implementation by 2020 an estimated 40 – 50,000 ships will be affected. However, in the future the systems will be expanded to incorporate the cleaning of NOx and particulate matter (PM) as both local and global regulations are expected to be developed to cover also such emissions.

Recently, Hamworthy Moss has made significant moves to expand its after sales offering by extending its product offering, being more proactive in following up on customer enquiries and strengthening its global network of contacts: “The company supplies a total set of services delivered by highly specialised personnel who work closely with operators to reduce overall operational costs and system downtimes. Such services admittedly cannot always be offered at the lowest possible prices initially, however the results they produce do leave customers with a reduced total cost,” Geir enthuses.

The ability to produce these results and the dedicated staff that carry out its operations are just two of the many strengths that have placed Hamworthy Moss in the position it retains to this day. Focused on the marine and offshore markets, the company possesses an almost unrivalled degree of experience that has been built up over five decades through the installation of more than 2200 systems and solutions. With an in-house facility dedicated to the testing and fine-tuning of all its equipment, the company continues to spend a significant amount on its programme of product development.

Although certain segments of the marine market remain sluggish, a trend that is expected to slowly disappear as the industry continues along its path to recovery, the offshore industry remains strong for Hamworthy Moss with increasing activity levels being seen across the board: “The company fully expects significant growth in all its areas of activity to occur in the years ahead,” Geir says. “This belief is based on the current market outlook and is supported by an incredibly detailed strategy, one that sees a major part of the company’s total growth coming from its expert exhaust gas cleaning activities.”