Back to Profile Gallery > Hayward Tyler

Hayward Tyler, one of Britain’s oldest engineering companies, is still showing that it has got what it takes when it comes to engineering excellence and cutting edge technology, having recently announced its largest ever oil and gas order valued at over £2.5m.

Hayward Tyler has been involved with many different industries throughout its near 200-year history, starting out as a plumbers’ merchant and was even briefly involved in the automobile industry when it built a prototype in 1903. This early motorcar model was lost in a factory fire but the company progressed, manufacturing the world’s first submersible motor that became essential to the global mining industry as well as high-pressure pumps that went on to be used in nuclear power stations. Its involvement in the oil and gas sector evolved from this participation with the mining and energy industry, and today it offers customers such as Eureka, GE Oil and Gas, and Aker Solutions a wide range of pumpsand motors used by some of the industry’s leading names.

Group CEO Ewan Lloyd-Baker talks in greater depth about Hayward Tyler’s approach to oil and gas: “Our products are about delivering an ever-changing solution to customers that happen to be involved with the fossil-fired or offshore upstream oil and gas market. To expand in the power sector, it required the development of pumps that would ultimately improve the efficiency of the boiler plant; over the years we have seen boiler sizes increase from subcritical to supercritical and so the design of our products have evolved with it. We invented this technology in the 1940s and continue to enhance and improve the designs today. There are currently over 2000 of our units in operation around the world, representing over 60 per cent of the total installed base, a fact that shows we can provide the customised approach and engineering excellence that some of the world’s leading energy majors expect.”

A strong business does not come exclusively from product innovation, however. Hayward Tyler makes strategic investments into infrastructure in order to expand its presence and influence throughout the industry. In May 2012, for example, the company announced that its largest shareholder, McNally Bharat Engineering (MBE) had completed a £5 million investment to provide Hayward Tyler with the ability to restructure and expand its operations in India. This was the result of lengthy discussions between the two companies about the benefits that Hayward Tyler could bring to and gain from a strengthened presence in the country, access to a broader supply chain and a stronger balance sheet. All of these mean that Hayward Tyler is able to provide a better service to one of its fastest growing client bases.

The investment comes after a slow but steady growth in business across Hayward Tyler’s various markets since the beginning of 2011. The last 18 months have continued this trend, with power generation showing particularly strong growth; despite the slump in nuclear power that followed the Fukushima incident, the work of Hayward Tyler’s US-based nuclear division 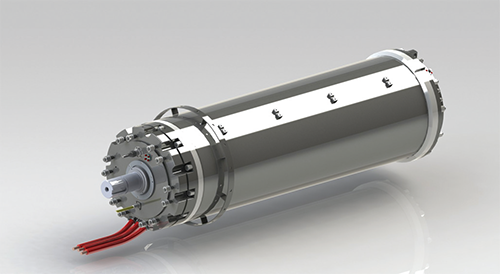 has improved since the beginning of 2012. Its activity in oil and gas, meanwhile, has remained resilient and positive throughout the last year and a half with orders coming in from across the world.

“Norwegian systems integrator Eureka awarded us a contract for 12 submersible motors that incorporate both fire water lift and sea water lift pump motor units. It will be delivered during 2013 and deployed off the coast of Newfoundland, Canada. Valued at £2.7 million, it is actually the largest single oil and gas project we’ve ever undertaken,” says Ewan.

This latest collaboration, masterminded by the company’s oil and gas project director Geoff Robinson, comes after the two companies partnered in early 2011 to deliver a £1.5 million five motor unit order to the Gudrun and Ekofisk North Sea fields. It is also a reflection of Hayward Tyler’s ongoing engineering prowess. “I think one of the reasons we were chosen is that we’ve achieved considerable development over the last two years, not only on internal jointing and bearing design, but also working with super duplex stainless steel,” illustrates Ewan. “We’ve learned a lot from the trials and tribulations we’ve had working with the material during the last three years that enabled us to push the boundaries and win this contract with Eureka.”

A reorganisation of Hayward Tyler’s infrastructure has also been important in reenergising the business. To cope with reduced activity since 2010, the efficiency of both supply chain logistics and production has undergone development to provide the manufacturer with more cost effective operations. After a significant planning period, the programme was put into action early 2012 and has already proven successful. One of the most significant aspects of this programme is a concept of ongoing improvement to the company’s main manufacturing operations in Luton. Hayward Tyler recognises that maintaining a cutting edge production line and flexible supply chain are essential for companies in today’s market.

Ewan goes on to speak of Hayward Tyler’s future in oil and gas and where the company will be in the coming years: “Oil and gas has historically been a small part of Hayward Tyler’s business but we are investing significantly in increasing its proportion of our overall business, both in terms of recruiting specific industry expertise as well as development of expertise already within the organisation. We are a niche electric motor manufacturer that can provide some very specific (especially large scale) motor units; this is what the oil and gas sector needs. Ultimately what is expected is efficiency and reliability and our units can enhance oil recovery, for example, by up to ten per cent – in the Tyrihans field that can equate to $1.5 billion of value. If the value of one of our units is £1.5 million the long-term value of our technology is very high. The key focus for us will be to ensure that end users are aware of this.”