Back to Profile Gallery > Helium One

Digging for the future

There is a whiff of adventure coming from the history of Helium One, a relatively young company, founded only in 2015. It is a story somewhat akin to the one told by Sir H. Rider Haggard in King Solomon’s Mines. CEO Tom Abraham-James tells us the modern tale of two Australian geologists who accidentally discovered the helium potential in Tanzania, amidst the global helium shortage 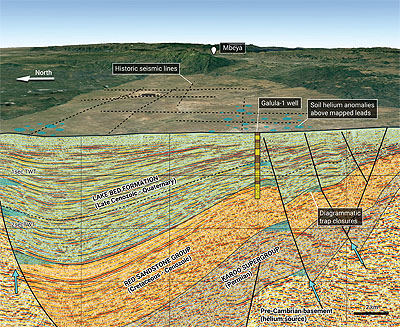 reported back in 2013. “Our Technical Director Josh Bluett and I were both in Tanzania in 2013, when we came across a Tanzanian government publication that summarised historic results for different commodities in the country and there were four pages of helium data from the 1950s when geologists were looking for hydrocarbons in the country,” Tom begins. “They analysed gas seeps and what they found was not hydrocarbons, but nitrogen and helium. According to the report, the helium concentration was in the range of two to 18 per cent. To put the significance of this discovery into perspective, the world’s major producer, the USA, has predominantly less than one per cent in its helium producing fields.”

It was evident that the surface helium seepages are akin to oil seeps, which have led historic explorers to discover new hydrocarbon provinces. From that insight, the two geologists saw the opportunity to dig deeper in the area, and so Josh and Tom began to build the first exploration model looking for primary helium deposits. Since then, they launched Helium One’s three main projects – Rukwa, Balangida, and Eyasi, with Rukwa being the most notable. Tom points out the highlights of the company’s first three years: “Since we founded Helium One in 2015, what we have been primarily doing, is building up a knowledge base. We had the historic helium measurements verified by a team of geochemists from Oxford University. We obtained legacy seismic data at the Rukwa project, too, and found two wells that were drilled in 1986 by Amoco, which were unsuccessful in looking for oil. We also brought a team from the USA to implement a surface soil gas survey and it proved to be an effective sampling programme that gave us a wealth of helium migration data. Our intention is to carry on researching this year, as this will help us better understand the helium migration system. Following our initial exploration work, we had Netherland Sewell & Associates International conduct prospective helium resource estimates in Rukwa. They defined an Unrisked Prospective Recoverable Helium Volume (P50) of 98.9 billion cubic feet, which highlights the Rukwa Basin’s potential to be a strategically large reserve, given that the total global consumption is currently about six billion cubic feet per-annum,” he reveals.

Another key discovery made by the Helium One team is that the helium concentration in Rukwa is between eight and 10.2 per cent, which is considered very high, and is expected to have a powerful impact on the process of production. Tom explains: “The high concentration means that less gas has to be processed to get the product, giving us a competitive advantage in terms of operational costs. It is also worth mentioning that the majority of the gas is nitrogen, which is inert and a non-hazardous, which simplifies the processing. It will reduce our environmental impact, too.”

Helium One appears to occupy a strong position in the helium market at the moment, but if we are to truly understand its global strategic importance, we should outline the present state of the market, and some of helium’s applications. “The world’s largest reserve of crude helium, owned by the US Bureau of Land Management, is going to cease sales to the private industry in September 2021 or before, which will remove a significant portion of existing supply from the market,” Tom details. “This will also take away the world’s largest primary source and will leave only secondary helium from the world’s largest helium plant, which is a CO2 production facility in the USA. Similarly, Qatar’s helium is extracted from the waste gas from their vast LNG stream. It will lead to a situation in which the world lacks a high production volume primary helium source to act as a buffer in the system, and therefore vulnerable to ongoing supply shocks. The problem with helium 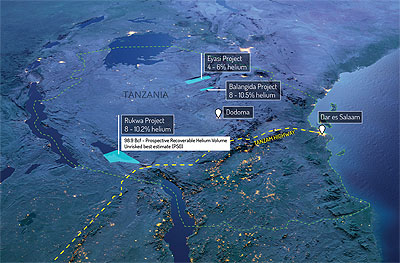 being secondary is that no one is going to increase the output of CO2 or LNG for the sake of helium only, and this is where we see Rukwa fitting in – our task at hand is to convert the resource to reserves and then see where Rukwa fits into the global helium supply chain,” he argues.

Helium finds applications in a wide range of high-tech sectors, such as cryogenics, welding, electronics, pressure purging, leak detection, and others. Tom informs us about two new applications that will have a material effect on helium demand in the years to come: “We have spoken to Lockheed Martin about the hybrid airships they are looking to start manufacturing next year. We have also noticed increased consumption in helium-filled computer hard drives, so we can say that the total demand for the product has been positive.”

He also touches upon the recent instability of the market, caused by the uncertainty around the levels of supply in the next few years: “A common comment that we hear is that helium is no longer a commodity. People wonder, ‘how can it be a commodity, when we do not know what the price will be next year, or even if it will be available to us at all?’ Should our exploration efforts at Rukwa be successful, we look forward to the project alleviating some of the supply concerns by it being a stable high-volume producer.”

While the past three years were spent on dedicated research, Tom’s intention for 2018 is to advance the Rukwa project to a stage where the resources are at last being converted into reserves. “These three Tanzanian projects have all the hallmarks of a prolific helium system, and we’re optimistic that our continued efforts will mature the projects into helium reserves for the long-term future.”

Helium One
Products and services: Development of helium assets in Tanzania