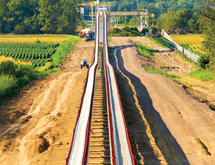 Ask for it by name – Northern white sand from Hi-Crush Partners LP. Like the variety of dairy products, beer or cranberries that make Wisconsin famous, companies performing hydraulic fracturing of oil and gas wells are seeking the highest-quality sand for their operations.

“The market is emphasizing the importance of high quality Northern white sand,” Hi-Crush COO Jay Alston maintains. “There are proppants that are sold cheaper and they have less landed cost because of location, but because of their inferior quality and crush strength, they’re just not being accepted by your bigger service companies and producers.”

Hi-Crush obtains Northern white sand from its two mines in Wyeville and Augusta, Wis. “We consistently put out high quality material because of its superior crush strength and turbidity, as well as sieve distribution compared to others,” Alston asserts. “We’re creating a brand awareness, since end users are starting to request our material. We have a track record for superior quality and timely shipments as well as a reputation for being easy to work with.”

What is it about that sand that makes it so valuable for hydraulic fracturing?

According to Alston, Northern white sand has superior crush strength, roundness and superior sphericity. “It all correlates to crush strength, conductivity and permeability,” Alston says. “The rounder a particle is, the less surface area it has to bridge on other particulates. So the rounder a particle is and the coarser it is, the more fluids and gas can pass through it, because it has greater void areas between the particles.”

Crystalline Structure
Although Alston notes some of this special sand from Western Wisconsin may also be found in limited parts of Illinois or Minnesota, Wisconsin is the state where the majority of the Northern white is mined, he says. The mines’ Midwestern locations ease shipping to other areas of the country, such as the Bakken, Eagle Ford and Marcellus shales and the Permian Basin.

However, shipping Northern white sand down the United States to the Permian Basin and the Eagle Ford Shale in Texas adds enough transportation cost that some well owners have settled for river or Brady brown sand. “Texas has Brady brown; it’s not near the quality,” Alston maintains. “Southern sand and river sands are multicrystalline – that affects their strength. Northern white is monocrystalline and has superior roundness, sphericity, crush strength and turbidity.”

One competitive factor that reduces Hi-Crush’s shipping costs is the fact that its facilities have on-site rail service with which it can build unit railroad trains of 80 to 120 cars or more that leave at one time.

“There are very few of our competitors out there that have the rail capabilities that we do, with the parallel unit train trackage,” Alston insists. “We have three tracks at each facility. Each will hold a unit train, so therefore we can store three unit trains at our facility. We think that’s very rare. To our knowledge, most companies have ladder tracks requiring unit trains to be built on the short line or main line. The last time we looked at the market, the setup that we have with the single-lane unit train capabilities and having three of those on our site were the only ones of this type.”

Processing Sand
Some competing frac sand facilities do not have on-site rail access – the sand has to be trucked to a rail depot. “That’s very common in this industry, and that escalates your cost substantially,” Alston maintains.

To be most effective, frac sand has to be processed after mining. Alston says Hi-Crush uses the latest processing technology. “We mine the sand, we wash it and hydraulically sort it, and at that point, we dry it, finish screening and then we put it into storage silos to be loaded out for transportation,” Alston says. “We help ship it to the customer’s desired location, and the customer at that point removes the material from the train cars and stores the material in transloading facilities such as silos or storage buildings. From there they put it in trucks and haul it to the well site.”

Some facilities that ship raw or wet sand may not process the sand at the mine. “They’ll mine it, sell it raw or washed, and when it gets to the destination basin, the processor will wash it again if needed, dry it, screen it and sell it to the ultimate end user,” Alston asserts.

Price Fluctuations
Alston estimates Hi-Crush has no more than 20 competitors in Wisconsin who have true sand processing capabilities. Hi-Crush contracts with clients for most of its sand but sells some on the spot market, where the price fluctuates based on the level of drilling activity.

“We feel confident that we are the lowest cost provider of Northern white frac sand based on the superior partners – we do not call anyone employees, but rather partners, as we believe that is what they are – that operate our plants and our state-of-the-art facilities,” Alston says. “This in turn gives us superior flexibility.”

A higher level of drilling resulted in Hi-Crush being established and its mines opened. “There were other companies already in existence before us that were supplying the market with frac sand,” Alston concedes. “It wasn’t until the unconventional shale plays opened up and the new drilling techniques were developed that this quantity of sand was used.”

Alston does not think there is a shortage of frac sand. “I don’t think there’s a long-term saturation in the market,” he observes. “If you ask me about the market as a whole, demand did slow in the latter part of 2012. We do expect demand to grow through 2013 and beyond as we are already seeing in the first quarter.”

Mining Process
Hi-Crush’s Augusta mine is open pit – “We’re mining the hills,” Alston says – and the 651-acre Wyeville mine is subsurface. It requires water to be pumped out of the excavation site continuously until the winter months, when the water table replenishes. This water is deposited on-site and allowed to drain naturally into the same watershed.

In early 2012, the Wyeville facility was expanded to increase its annual processing capacity in multiple mesh sizes from 950,000 to approximately 1.6 million tons annually. Hi-Crush has a fixed price contract with Gerke Excavating to do the excavation. The Augusta facility also has a capacity of 1.6 million tons of sand annually.

“Our cost is a little less at Wyeville because of the type of mining that we do versus Augusta, but Wyeville has water that we have to deal with,” Alston points out. “It’s cheaper to mine subsurface.” Built with haul roads, the mine uses trucks to transport its sand short distances to the surface.

The mining is done by Gerke employees, and Hi-Crush employees do the processing, of which 80 percent of the dry plant is indoors. The mines operate year-round except for the wet process, which shuts down when enough sand has been stockpiled to last through the winter. The water could be heated so the wet process could be run throughout the winter, but Alston thinks that would add too much additional cost to the price per ton and is unnecessary.

Alston and newly appointed Vice President of Operations Chad McEver take a hands-on approach and supervise both mines remotely when not on-site. Alston views the facilities through cameras and on duplicate operational monitors at his office and home. “I can see in real time what goes on,” he reports.

Three Founders
Hi-Crush was founded in June 2011 by James Whipkey and Robert Rasmus. The two shortly thereafter brought Alston on as the third partner. Whipkey was a petroleum engineer turned financial analyst and Rasmus has a financial background in the energy industry. The two now are Hi-Crush’s co-CEOs. Alston was a consultant on frac sand processing facilities, but he shut down his company, Trinity Consulting, to join Hi-Crush.

The Wyeville mine began functioning in the summer of 2011, and the Augusta mine in July 2012. Both were greenfield projects. Core samples from the mines indicate their reserves may provide more than 30 years of frac sand mining.

Hi-Crush is known for the quality of its environmental measures – such as watering roads daily and sand piles when needed to prevent dust, construction of a mile-long conveyor between mines to eliminate trucking and use of voluntary air emission monitors.

“We have a no-trucking model,” Alston emphasizes. “We will not truck sand. We don’t want to tear up the roads in these communities or inconvenience them with hundreds of trucks running through their communities daily.”

The company also is known for its transparent management style. “We were probably the first sand company to be completely transparent with the regulatory officials and newspapers,” Alston says. “We chartered buses and brought them into our facility to inform them about the way we run our facilities.”