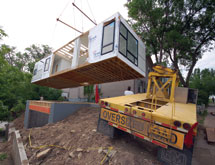 The niche of developer Hive Built Homes is to use modular construction to speed projects and keep quality high, but to also design homes with sister company Hive Modular and M.A Architecture that are not perceived as modular.

“This last year, we built seven houses – not a huge number, but it feels like a good foot in the door,” Hive Built Homes Co-owner Marc Asmus says. “The first five were in Williston and two were in Minot. All but one were modular.”

Asmus estimates modular construction saves 85 to 90 percent of the labor required by on-site construction and reduces dependence on strained local resources and avoids the high prices that can result.

Factory-built Homes
The North Dakota homes were built in factories contracted by Hive Built, but were designed by Hive Modular, which is the architectural firm also co-owned by Asmus, who is an architect, and two partners. “We vet the factories pretty carefully,” Asmus emphasizes. “One we like, Stratford Homes, has been a key factory partner in the Bakken, with two plants that can supply us across the northern U.S. and western Canada.

“Hive Modular’s innovation in the modular industry has been introducing better design and more contemporary products,” he says. “Our experience at Hive Modular over the last nine years has been creating high-end, modern, modular architecture. We’re bringing some of that open-plan, dramatic space, modern design sensibility and modular experience to a more traditional offering at the upper end of entry-level.”

The modular homes are designed and built to be transported as oversize loads on highways in three to four truckloads. “Shipping can make the difference between whether we can build a house profitably or not,” Asmus cautions. Hive Built Homes has developed a network of seven modular homebuilders around the United States and Canada, which is important when transportation can cost $5,000 per truck.

Set Crew
Local subcontractors excavate and build the foundations for the homes, but one of four set crews of five or six people – specialists in setting modular homes on their foundations reliably – travels around the country from job to job. “The day the trucks get there, they coordinate the crane and place the houses,” Asmus explains. “There’s a bit of an art in making sure it gets set down right and the alignment of the modules is correct. They do the hookups of the modules to each other. They hook the utilities up inside the modules. They mend the roof and put on the siding where the seams come together to make the house weathertight. They will be in town two to four days per house.”

Then local subcontractors finish connecting the water, plumbing, sewer, electrical and gas utilities. They also fix minor cracks that may have developed in the sheet rock during transport and paint them and install shower doors, mirrors or hanging light fixtures that would have swung and caused damage during transport.

No Infrastructure
Minneapolis-based Hive Built Homes functions as more of a builder than a developer. “We’ve purchased land from developers,” Asmus explains. “We don’t do any infrastructure. In Williston and Minot, we purchased the land from a developer, and it was open development – any builder who showed up and was ready to buy land could come in there.Ideally, we think Hive Built homes would have the most impact concentrated as a cluster of 10 to 15 homes or in a neighborhood. I think we’ve got something to offer people that are expanding in the oil regions.” EMI