Back to Profile Gallery > Höegh LNG

With almost 40 years experience in the marine transportation field, Höegh LNG has maintained a cutting edge profile within the sector through its investment into innovation.

The recently developed proprietary technology, the Shuttle and Regasification Vessel (SRV), has become a cornerstone for the company’s future business, whilst it continues to raise its profile in the traditional liquefied natural gas (LNG) market and expand into the next phase of the LNG value chain, FLNG or Floating Production Storage and Offloading.

Höegh LNG has experience within the LNG sector since the delivery of Norman Lady in 1973, the world’s first LNG carrier with spherical tanks. The company operates today seven ships, of which five are conventional LNG carriers whilst two are the recently delivered SRVs (2009 and 2010), and the fleet serves a wide range of solid clients including Total, Statoil, GasNatural and GDF Suez.

The development of the SRVs came about because onshore LNG terminals have become increasingly difficult to build due to a variety of environmental, security and safety issues, in addition to becoming very expensive. Seeing this widening gap in the industry, Höegh LNG teamed up with GDF Suez to design and commission the state-of-the-art vessels that now operate off the coast of Massachusetts, US. These 280 metre ships are named GDF Suez Neptune and GDF Suez Cape Ann and have a 750mmscf per day regasification capacity. Furthermore, both have been granted Det Norske Veritas’ Green Passport, which guarantees the highest levels of environmentally friendly execution during both construction and operation of the vessels. Both vessels are on 20-year time charters, displaying the long-term relationships that Höegh LNG has with its clients.

Media relations manager, Geirmund Aasbo, explains some of the benefits of these new ships: “The new SRVs are the most advanced regasification vessels of their kind, and the most environmentally friendly LNG ships in the market. The vessels have entered into service, performing partly as part of the Neptune project, but also capable of serving other projects and requirements.”

The Neptune Project includes more than just these two new vessels, since it also encompasses two submerged turret loading (STL) buoys and pipelines to shore. The buoys are specially designed for the mooring and offloading of gas from the SRVs and have proven themselves reliable even during severe weather conditions. 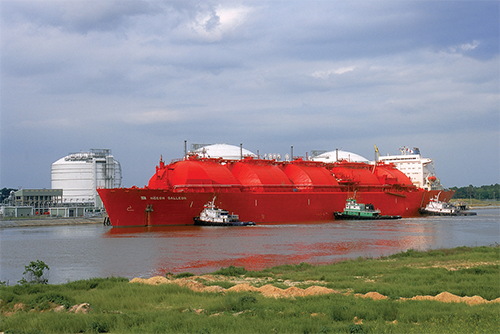 Geirmund explains that Höegh LNG’s investment into innovation continues to be an important element: “Our main focus is to work with new builds, and this is what differentiates us from other players in the market. The emphasis on technical innovation stems from the belief that this is the most economically viable way to carry out new projects, especially from an environmental point of view. Because we can develop solutions which are more energy efficient, we can make the project competitive compared to what is currently on the market.”

Though the updating or converting of old technology can prove useful in upgrading performance, Höegh LNG believes that this approach is limited in its effectiveness. Whilst it requires lower upfront capital, long-term expenses are increased because old technology is comparatively inefficient in its operation, requiring more energy and operational maintenance resulting in higher operational costs, in particular for a long-term contract.

This has been of definite benefit to the company, as Geirmund points out: “Being an established operator opens up additional opportunities within the regasification business, and I think it’s fair to say we are now on the radar screens of most major industry players, meaning we are given the opportunity to work with many projects worldwide. We also are recognised for being a quality provider, using state-of-the-art technology and putting it together in an excellent package for our clients.”

In addition to expanding within the regasification business, Höegh LNG is also expanding its services to production through its LNG FPSO project (FLNG) and market access through its Deepwater Port Projects. In the LNG FPSO project, Höegh LNG has developed a mature technical solution for an LNG FPSO for rich gas in co-operation with its partners DSME, KBR and Prosafe. Höegh LNG has invested 300,000 engineering hours in the development of an FPSO design covering a large range of operating conditions, water depths, significant wave heights and gas compositions.

The recent economic crisis has had an impact on the energy sector, but this has not dampened the company’s spirits. With the sector picking up once more, the future is filled with prospects and opportunities for Höegh LNG. Geirmund concludes with a positive outlook: “We will definitely grow within the regasification and FLNG business. In terms of traditional shipping we will continue working with our main clients whilst watching how the market develops, but traditional LNG looks to stay challenging in the next few years to come. Hence our major investments, therefore, will firstly be on growing our position in floating regasification and floating LNG production. ”