Back to Profile Gallery > Humbly Grove

In the early 1980’s two reservoirs were discovered, the Great Oolite at approximately 3500 feet below sea level, and the Rhaetic reservoir almost 1000 feet deeper. After more than 20 years of production the original gas cap reservoir became depleted and in 2005 the field, wells and surface facilities were redeveloped as a gas storage facility following modifications that enabled both reservoirs to be utilised.

The gas store at Humbly Grove boasts a working volume of close to ten billion cubic feet working with a maximum withdrawal and injection rate of 260 million cubic feet a day, and 300 million cubic feet a day from and to the Oolite and Rhaetic reservoirs. The facility provides approximately six per cent of the UK gas storage capability and up to three per cent of the national transmission system daily demand. The National Grid quality gas is injected into the reservoir where it becomes hydrocarbon and water saturated. During export the saturated gas is treated through a dehydration system and gas treatment facility to return the gas to the national transmission system to the correct specification. During the seven years of gas storage operations, the site has withdrawn and treated almost 250 billion cubic feet of gas.

Health and safety of personnel, the public and the environment is becoming ever more dominant in the field of gas storage. The Serveso Directive is the main piece of EU legislation that deals specifically with the control of onshore major accident hazards involving dangerous substances. In the UK, storage activities where quantities of dangerous substances are kept and stored, exceeding threshold levels, are controlled and rigorously monitored by the Health and Safety Executive and Environment Agency under the Control of Major Accident Hazards Regulations (COMAH). Initially the regulations were not specifically inclusive of the oil plant, the oil production facilities and the oil wells at the facility.

Managing director Arthur Moors has been at the site for over 25 years. In an interview with European Oil and Gas he explains the development and evolution of the health and safety strategy of the business: “Humbly Grove, through consultation with the Health and Safety Executive, elected to bring the whole establishment under one umbrella, within the regulations, to raise the safety standards of the business and develop a common framework across the whole organisation. One of the major changes under the establishment as defined under the COMAH regulations is that the oil, the gas and the entire facility, or establishment as defined by the HSE, including the wells, the oil production and gas storage facilities, the well-sites and all pipelines now fall under the COMAH Regulations of the Health and Safety Executive.

“It’s fundamentally a change in policy, systems, procedures, culture and standards, and the way we operate the plant, maintain it and regulate it, through inspection, maintenance and contingency planning, whether that’s through routine inspection against defined key performance indicators, or conforming to much more rigorous and stringent safety requirements under the regulations and the regulatory competent authority.”

The business has also been extending its facilities to improve production and increase its production capacity. Arthur continues: “Over the last 12 months we have gone through a major Capital Expenditure and integration of the plants through the enhancement of the facility. Previously, the gas storage facility functioned as a standalone unit from the oil production facility, with oil being a by-product. As a consequence of that we had issues around the oil, water and gas handling, and particularly the gas handling capabilities. To overcome this and capitalise on, and increase, oil production we’ve worked over additional wells, we’ve put new surface facilities in, made improvements to control systems, re-configured our compression 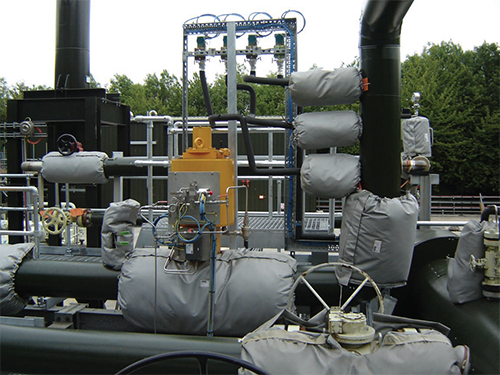 The strategic importance of Humbly Grove was highlighted earlier in 2013. Following a period of well-documented study on climate change the UK has been progressively witnessing more extreme weather conditions. The extended winter months are still surprising the population though, and the cold months that followed in 2013 through January and February to the end of March, put huge demand on gas supplies to keep Britain warm.

“Humbly Grove was one of the very few gas storage facilities that managed to produce gas to the National Grid system to support the European failures of the pipe-work, pipelines and interconnectors between the UK and Europe it was one of the few that was still capable of producing gas at a time when most other gas stores had been depleted,” recalls Arthur.

With environmental issues close to heart, Humbly Grove is maintaining its position as a key business whilst operating within narrow emission allowances. The European Union Emissions Trading Scheme (EU ETS) was launched in 2005 to combat climate change and remains a major point in EU policy. The scheme covers more than 11,000 facilities in over 30 countries. It operates a ‘cap and trade’ principle setting a limit on the total amount of greenhouse gases that can be emitted.

In the UK, Department of Energy & Climate Change (DECC), DEFRA and the EA have developed the Carbon Reduction Commitment (CRC) Energy Efficiency Scheme, which is aimed at improving energy efficiency and cutting emissions in large public and private sector organisations that contribute to the greenhouse gas emissions. Participating organisations are required to monitor and report their energy use. Allowances must be purchased and surrendered to offset their emissions. The scheme has been revised in an attempt to reduce overlap with other schemes, but this is currently a challenge that Humbly Grove is faced with.

Shedding light on the issue Arthur says: “We fall into both categories – the CRC scheme, and EU-ETS scheme. The two systems are totally different so while we are actually reducing our carbon emissions on one, we are finding we are increasing them on another and getting penalised as a result despite our overall carbon footprint dropping.

“An example of one of the improvements that we are currently going through. We are currently investing significant capital to improve and upgrade our electrical supply to the site, being a modification and enhancement of our power import capabilities. We are focused to a move from direct carbon emissions through combustion – i.e. power generation on site through gas turbines to indirect carbon emissions through imported electricity. Even though this actually creates a significant drop here in our carbon footprint overall, under legislation of the CRC scheme that has been released, when you import electricity from the grid it actually imposes taxation on the amount of carbon emission tonnage and emissions that it is equivalent to.

“So Humbly Grove is currently investing on site, with major capital expenditure to be more efficient and reduce its carbon footprint, and as a consequence of that, through the legislation that is set down through DECC, DEFRA and the EA, we are being penalised with increased taxation through carbon emissions of indirect imports.”

Following breakaway from Star Energy Ltd in 2011, Humbly Grove Energy has continued to build on the relationship with its principle customer. Arthur states: “The relationship with our shareholder is very strong, we have a very good understanding, we communicate on a regular basis and they are fully aware of the importance of Humbly Grove as one of their flagships for gas storage, and as a consequence, with our parent company we are consistently looking at ways of reducing cost, improving energy efficiencies, increasing profitability, availability and reliability, to increase the benefit both on an operational and energy level and also on a financial basis. Efficiency, effectiveness and customer satisfaction are our main drivers and vision.”

Humbly Grove is in discussions with the Valuation Office Agency (VOA) with regards to costs that are holding back the industry. Arthur explains: “We are actively lobbying with the VOA as far as rates are concerned at the moment. Our costs have increased over the last four years by almost 300 per cent and the rates payable to the VOA account to 25 per cent of our total operating expenditure. Its not surprising that gas storage companies and operators with those sort of overheads are not investing in the future, and it’s obviously a concern as far as the gas storage industry is concerned because I understand that the UK gas storage can only sustain gas production for, in the region of 13 days in a year.”

Summarising, Arthur concludes: “Cost reduction and efficiency are our main drivers at the moment. We are actually increasing our manning levels slightly to enhance communication and are in the process of a complete review of our surface facilities for de-bottlenecking to improve the available throughput of gas in the plant to our customer and shareholder. This includes a focus the availability and reliability of all of the surface and sub-surface facilities and equipment, with target availability during 2013 of 99 per cent. As far as the management team are concerned, anything that improves the availability, reliability, flexibility and the trading capabilities of our business must remain one of our paramount targets, objectives and business vision. We are consistently looking at the reservoir in terms of its injectivity and deliverability and we aim to ensure the plant is available to deliver what is required when the customer wants it delivered.”