Founded by Chung Ju-yung in March 1972, and this year celebrating its 40th anniversary, Hyundai Heavy Industries (HHI) wrote the first chapter of its shipbuilding history in 1974 when it completed construction of, what was at the time, the world’s largest shipyard.

In just a decade the company has topped ten million deadweight tonnes in aggregate ship production, maintaining a leading position in the shipbuilding sector ever since.

With its mission being to become a global leader in the heavy industries market, HHI’s progression has mirrored that of the Korean heavy industry and for four decades it has been accomplishing things that at one time would have been thought to be theoretically and scientifically impossible. These accomplishments have resulted in the company becoming what it considers to be a bridge between reality and possibility for its customers. This has been achieved through the company’s professional, experienced employees and their application of the ‘Hyundai Spirit’, a thought process driven by a combination of creative wisdom, positive thinking and unwavering commitment.

“A well known brand name in all four corners of the world, HHI today has a global business network that encompasses its seven business divisions, which include shipbuilding, offshore and engineering, industrial plant and engineering, engine and machinery, electro electric systems, green energy and construction equipment,” states Executive Vice President, Mr. J. D. Kim. “This network has seen the company conduct work in all the major oil and gas markets, from the North Sea and Russia to the US, the Middle East and off the coast of West Africa.” 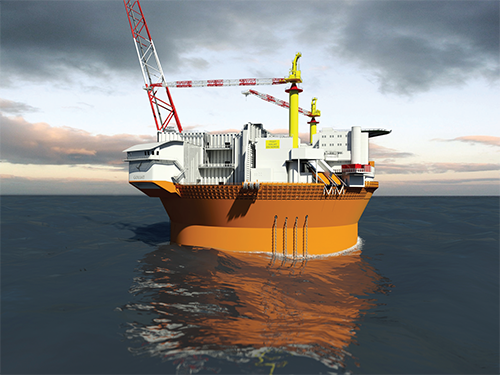 The North Sea, specifically the region encompassing Norwegian and UK waters, is one particular area of focus for the company where it is currently participating in a number of important projects. One such project, in this case with BP, was announced back in February 2011 and involves the building of an FPSO for the Quad 204 project. Valued at approximately 1.356 billion, the contract itself revolves around the FPSO being able to produce 130,000 barrels of oil and 2.2 million cubic metres of gas per day. Measuring 270 metres long and 52 metres wide, the unit will have a storage capacity for 1.06 million barrels of oil. Due to be delivered in August 2014 to develop the Quad 204 area in the Schiehallion field, west of the Shetland Islands, the new unit will replace the existing Schiehallion FPSO.

“Although it is one of the world’s more mature regions, the North Sea is continuing to be a source of a great many possibilities and opportunities,” Mr. Kim continues. “Elsewhere, the company is looking to capitalise on the increase in demand for FPSOs from countries including Nigeria, Angola, Abu Dhabi, Qatar, Saudi Arabia and throughout the Gulf of Mexico.”

Not only an expert in delivering large FPSO-based projects, recent years have seen HHI become equally well versed in the supply of LNG carriers. At the turn of the year the company formally announced the complete development of its own Hyundai Floating Liquefied Natural Gas Plant (FLNG) model in associated with Linde AG. With its annual production capacity of 2.5 million tonnes of LNG and ability to store around 193,800 cubic metres of LNG, this design boasts a unique, compact size of 355 metres in length and 70 metres in width.

Existing as a concept design at this stage, HHI’s FLNG consists of hull and topside facilities, and has received approval-in-principle from Norway’s DNV. The topside includes not only liquefaction and pre-treatment units but also utilises such as a fresh water supply unit, an air compressor, heat source and power generation systems. The development of the Hyundai FLNG makes HHI the only company in the world that can conduct engineering, procurement, installation and commissioning for both the topside and hull sections. Taking approximately 25 per cent less time to build in comparison to onshore liquefaction and storage plants, this FLNG model is expected to become a particularly attractive option for oil majors and global shipping companies looking to commercialise standard gas in offshore fields.

“As everybody will be well aware the years of 2008, 2009 and 2010 were defined by the downturn in activity that came as a result of the financial crisis. However, in the time since there has been a steady improvement in business terms as the price of oil remains above $100 a barrel and developing nations continue to prosper,” Mr. Kim explains. “What HHI is also now seeing in countries including Korea, Japan and China is a growing demand to harness natural gas in order to use it as a form of power generation. Driven by the continued movement of these nations away from nuclear power in the wake of the Fukushima disaster in 2011, this is expected to contribute to the further growth of the FLNG market in the years to come.”

As the trend of offshore production facilities getting bigger, more complex and safety conscious continues unabated, the focus of HHI turns increasingly to its own need to enhance its capabilities in order to remain a one-stop solution provider to its clients: “What HHI will continue to do is invest in not only its facilities, but also it people, its marketing processes and in ways to increase its international presence. The ultimate goal at the end of the day is for the company to be in a position to be able to service its clients wherever they are in the world, and by doing this HHI can be assured of retaining its position as a leading player in the heavy industries sector,” Mr. Kim concludes.