Back to Profile Gallery > i-Tech

As the world’s demand for oil and gas continues to grow, operators increasingly face greater technical challenges in the exploration of new fields and the exploitation of ever more remote energy sources.

Nowhere is this truer than in subsea operations, where harsher environments, remote locations and deeper waters has driven the development of increasingly advanced ROV systems.

Headquartered in Aberdeen and operating as a fully autonomous division of Subsea 7, i-Tech is a world leader in the supply and operation of ROV and subsea intervention tooling to the global energy market. In addition to the provision of core services, i-Tech also offers bespoke offshore engineering solutions to meet individual client needs. The division was established in 2006 as an independent business unit of Subsea 7 and shortly thereafter launched the Centurion QX as its new flagship work-class ROV. Today, building on the industry experience from Subsea 7’s heritage, which has included numerous mergers and acquisitions, i-Tech continues to deliver world-class customer service and industry-defining ROV design. This is evidenced through the successful QX system evolving to the class-leading Centurion SP, which was launched in 2013.

Globally, i-Tech has over 1000 personnel including its own management team and equipment pool to fully meet its clients’ needs. It has provided ROV systems and services to all of the industry’s best-known super-major and independent operators. Operating a fleet of over 100 work-class ROV systems, i-Tech has a large global footprint with regional offices in Aberdeen, Houston, Rio das Ostras, Brazil and Perth, Australia. The company can also count on the support of its satellite offices, which are located around the globe for example, Equatorial Guinea, Egypt and Mexico. These dedicated offices allow i-Tech to deliver a strong, targeted service to clients. 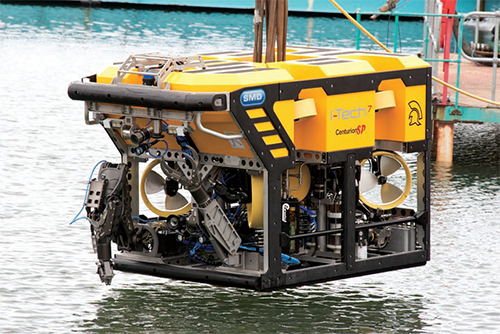 For i-Tech the biggest growth area over the past five years has been in Brazil, where challenging environmental conditions and the demands of the ‘pre salt’ ultra-deepwater areas has helped to drive the development of ever more advanced and powerful ROV systems. i-Tech has earned a renowned reputation and market-leading position in Brazil, driven by the award in May 2010 by Petrobras of the biggest ROV contract ever awarded globally, for ROV and intervention tooling. This included supplying ROV’s to 30 drilling rigs. The contract value was in excess of $400 million and called for the provision of the ROV systems and a fully trained crew of nearly 200 over the course of the three-year mobilisation period. This opportunity allowed i-Tech to build on its reputation for ROV provision and design, as Clovis Galdino, general manager of i-Tech Brazil explains: “The award was based on a new ROV design to specifically meet Petrobras specifications whilst offering proven reliability, easy maintenance and operation and compatibility with our existing fleet. It was a major factor in our being awarded the work. Despite the fact that the design of the system was similar, each rig mobilization was different from an engineering perspective. In addition, given that we were mobilizing one ROV spread every few months, our supply chain and logistics processes had to be efficient. With this large contract we became the market leaders in the region. We are now expanding into the vessel side of the business, undertaking inspection, repair and maintenance (IRM) operations. This will differentiate us further in the market place.”

In October 2013, i-Tech announced that it had won another major project with Petrobras valued at around $60 million. The project will call for the provision of ROV and underwater positioning services on board the platform supply vessel (PSV) Far Saga, offshore Brazil for an initial six-year term with further options to extend this for a further six years. Furthermore, the operation will see the deployment of i-Tech ’s newest ROV, the Centurion SP. In a press release confirming this award, i-Tech managing director Bruce Masson announced: “This contract will see the first deployment of our new generation Centurion SP work class ROV on board the PSV. The Centurion SP vehicle is one of the most powerful ROV’s currently available in the market, offering a high thrust to weight ratio which is important when working in areas of high currents.”

The SP is a further evolution of the successful Centurion brand and is the product of a collaborative relationship with its ROV supplier, Soil Machine Dynamics (SMD). i-Tech senior commercial manager, Brian Reid elaborates: “i-Tech has had a long-term relationship with SMD (based in Newcastle), for the construction of ROV systems. This has enabled us to continue to develop leading ROV solutions, which continue to win the company contracts globally. The Centurion SP is i-Tech’s answer to the next generation of ROV system, this is a continuation of the Centurion brand. We have used the Centurion name for some time now, firstly with the Centurion HD, which evolved into the QX and now the SP.

“The SP is as close to a new design that we have ever commissioned,” he adds. “It has a new propulsion system and it is very much upgraded as far as its overall capability is concerned. It is an industry leader in terms of bollard pull and vertical thrust. That has been a key focus during the development of the SP; to develop maximum thrust and minimised surface sail area.”

Elaborating further on the advantages provided by the innovative new ROV, Clovis observes: “The SP is one of the most powerful ROV’s on the market at the moment, with a horsepower of 230 and a bollard pull of 1200 kilos, making it a class-leading ROV. It is able to operate at conditions of four knots of current, which is important because in the new fields that Petrobras is currently developing, the currents are very strong. The standard machines that are in operation in the market today are not capable of dealing with such conditions.”

With the inclusion of the Centurion SP ROV within its equipment portfolio, i-Tech has gained a versatile tool that joins its existing fleet, expert pilots and collaborative global support network. This will help the company meet the challenges as it continues to evolve throughout 2014 and beyond.