“Over the last two years the company has been working to expand its activities on the Norwegian Continental Shelf (NCS), a process that has brought with it many interesting and exciting developments,” explains Teruyuki Takahashi, managing director of Idemitsu Petroleum Norge (IPN).

“In addition to its oil and gas production of around 27,000 barrels of oil equivalent per day from the fields in the Snorre and Fram areas, the company had a new field, Vega South, come on stream in 2010. In the meantime two PDO’s for the Knarr and Vigdis Northeast fields have been submitted to the government and been approved, meaning production from these two fields is expected to commence within a few years time.”

As a subsidiary of the Idemitsu Group, one of Japan’s largest energy corporations with over 8200 employees worldwide, IPN entered the NCS in 1989. Based in Oslo and employing over 50 skilled and highly experienced professionals, IPN’s core area, historically, has been based within the northern North Sea. However, today it is actively pursuing opportunities across the NCS.

“Ever since the company first began participating in exploration and production activities in Norway in 1989 it has been constantly building and honing its competencies in selected fields while working with a number of renowned, competent partners. This has helped IPN develop its key strengths, which remain its play and prospect generation capabilities and its ability to successfully tender for commercial opportunities by leveraging its experienced engineering staff and stable financial status,” Teruyuki says. 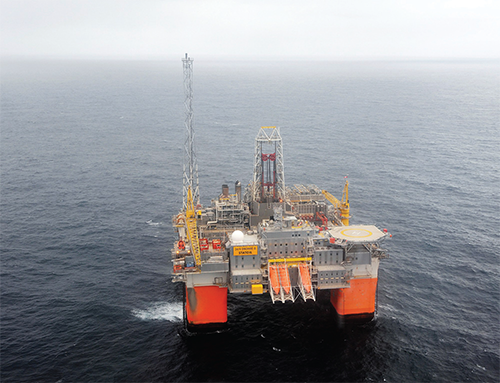 “In the two years between 2009 and 2011 the company acquired 12 exploration licenses in the APA 2009, APA 2010 and the 21st licensing round on the NCS. These include two Idemitsu operated licenses in the North Sea and licenses in the sub-basalt province in the deepwater region of the Norwegian Sea as well as in the Barents Sea. As of October 2011 Idemitsu has a total of 23 licenses on the NCS, three of these it holds as an operator,” Teruyuki continues.

The last 12 months have seen IPN make significant strides in the process of growing the business and the size of its operations. In June 2011 the development of the Knarr field was formally approved by the Norwegian Parliament, a move that will see the field adding significant additional oil production to IPN’s profile on the NCS to approximately 35,000 barrels per day.

Further to its significant progress within the Northern region of the NCS, the company was recently awarded two additional production licenses in the Barents Sea: “PL 609 is a fairly large license composed of three whole blocks and two part blocks in the Western region of the Barents Sea, due east of the site of the Skrugard oil discovery,” Teruyuki highlights. “This license is situated on the Loppa High and includes several plays as well as a number of prospects and leads. Further East the company has been awarded a 40 per cent share in the Statoil operated PL 614 on the Mercurius-Hoop Fault Complex area. Licenses such as these help showcase how the company has been striving to expand its activities from its traditional heartland of the northern North Sea to the Norwegian Sea and into the Barents Sea.”

The last two years have seen the oil and gas industry as a whole make a particularly strong recovery from the effects of the economic downturn, one that has brought with it a return of high activity levels. These rapidly changing times have naturally meant that companies such as IPN have had to adapt accordingly to meet fresh challenges and demands: “In our view, one of the major aspects of the business that has changed since 2009 is the fact that the capacity utilisation throughout the whole value chain is now running at an extremely high level, something that has created intense competition for scarce resources,” Teruyuki states. “This environment has the potential to lead to spiralling costs, however in its current state the investment climate within the field of exploration and production remains fairly favourable due to the high oil price.”

2011 is a particularly special year for the Idemitsu Group as it celebrates its 100th anniversary. For a century the company has remained true to its core concepts, having respect for all human beings and making a positive contribution to society, and has strived to expand and improve its resource business. Oil and gas is a core sector within this business and, as Teruyuki concludes, Norway will remain central to its activities in this field: “IPN has a strong will and desire to continue being an active exploration and production company on the NCS.

“In June 2011, the Norwegian government published a report entitled ‘An industry for the future – Norway’s petroleum activities’. This report illustrates the main aims of Norway’s petroleum policy and its plan to strength its long-term management structure and achieve value-creation based on Norway’s petroleum resources. These ambitions fully match the long-term strategy of IPN and its own wish to grow organically and remain a dynamic, successful explorer.”