Back to Profile Gallery > IDM Mining 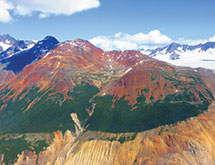 Sometimes an opportunity is simply too good to pass up. That was the conclusion IDM Mining came to when it acquired the Red Mountain Project in Stewart, British Columbia, in October 2013. Red Mountain is located on the southern end of the famous Golden Triangle, an area in British Columbia rich with silver and gold. Previous exploration at the project has revealed a property prime for production. The 17,125-hectare project was discovered in 1989 and explored extensively until 1996 by Lac Minerals Ltd. and Royal Oak Mines Inc.

More than 400 diamond drill holes and more than 2,000 meters of underground development have been completed, along with extensive engineering and environmental baseline work. Additional studies were completed over the past 12 years by Seabridge, North American Metals Corp. and Banks Island Gold Ltd. In 2014, rapid glacial retreat revealed new discoveries. For IDM Mining, the project is not necessarily a new find, but still a great buy, as President and CEO Rob McLeod explains.

“There’s an excess of $40 million spent on this project including previous economic studies and metallurgical work, so there’s not much more that needs to be done from an exploration perspective to advance the production,” McLeod says. “There’s potential here for near-term production since it shows high-grade deposits averaging between seven and 10 grams. It’s also a wide ore body, so it’s amenable to bulk underground mining methods.”

In December, IDM announced final assays results from exploration and step-out drilling at 12 diamond drill holes that were completed during September and October 2014.

The drilling focused on an updip step-out hole from the JW Zone, the Marc Zone extension and the Cambria zone.

IDM also completed five drill holes in the Cambria Zone. Significant new areas of massive and semi-massive sulphide were identified during the 2014 field season. These are newly exposed areas of surface mineralization that were uncovered due to glacial retreat over the past 20 years. The Cambria Zone is located 500 meters southeast and on trend with the Marc-AV-JW resource area. Similar to the Marc Zone, the Cambria Zone hosts a large area of centimeter to several meters wide gold-bearing massive pyrite stockworks and veins. Cut-saw channel samples averaged 10.94 grams per ton of gold over 8.13 meters and 20.31 grams per ton of gold over 3.40 meters, with mineralization continuing under overburden. Located 150 meters north of Uxlox within a contiguous north-striking structure, Red Mountain’s Wyy Lo’oop Zone is another recently exposed outcropping of massive sulphides. A 3.94-meter-long channel sample of massive and semi-massive mineralization assayed 10.6 grams per ton of gold.

“These drill results are indicative of the significant exploration potential for high-grade gold mineralization at Red Mountain,” McLeod says. “With a development plan in place and the permitting and consultation process underway for a near-term, high-grade underground gold mine, further exploration success could greatly enhance project economics.”

The Next Steps
McLeod explains that the PEA showed “a very robust economic outlook and over 40 percent pre-tax internal rate of return.” The company is taking steps to see that return as it continues the environmental assessment process with the British Columbia province that it began in September.

“We think it should be a straightforward project to permit,” McLeod says. “There are no federal triggers for environmental such as salmon spawning habitat areas on the property. We have to work with the provincial regulators and we’ve started that process. Over the next 18 months, we will continue down this road with the objective of getting permits in early 2016.”

After permits, it’s on to construction. IDM estimates capital costs for the mine construction, which include a 15 percent contingency, to be $76 million. IDM is planning a 1,000-ton-per-day operation with five-year mine life. However, that number could be extended.

“It’s a larger property – over 17,000 hectares – so we think there is a tremendous opportunity to extend the mine life,” McLeod explains. “There are numerous prospects and showings over a 16-kilometer-long strike length, so we think there is great potential to add more resources all within the property we have now over the years, giving us seven years to extend the mine life.”