For close to 60 years IHC Vremac Cylinders BV has offered expert solutions in hydraulic cylinders and has developed a leading reputation in a variety of markets.

Gerrit Venderink, who began the business with only four members of staff, founded the company in 1958 and today the company has grown to employ a workforce of 110 people. The business is based in Apeldoorn, the Netherlands from where it has operated for the past 50 years. The name Vremac is an acronym of Venderink Repairs and Machine Factory and has become synonymous with market-leading design and manufacture. So much so in fact, that during 2007 Vremac became part of the IHC Merwede Group after operating as a trusted supplier to the company for many years. The strategic decision to transition Vremac from client to part of the IHC Merwede 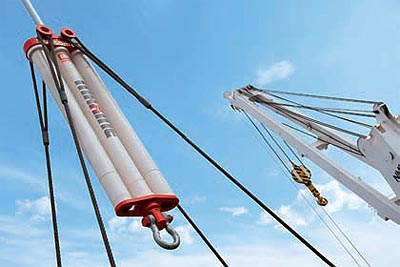 Group is indicative of the reliability of the solutions provided by the company and today, Vremac hydraulic cylinders are essential components within the hydraulic systems sold by IHC Merwede worldwide.

During the company’s early years Vremac was solely focused on the repair of cylinders for a host of industry sectors, before market demand prompted Vremac to move into the repair and manufacture of hydraulic cylinders as well as presses, accumulators and other products in both standard and bespoke models. The industries serviced by the company today include dredging, offshore, civil engineering, heavy machinery and recycling and demolition, providing Vremac with a diverse market base and stability advantages.

More than 50 per cent of the work undertaken by Vremac is centered within the oil and gas industry for clients in Europe and around the world. The harsh conditions that accompany operation within offshore and subsea environments present a challenge to operators that can limit the operational window and lifetime of costly lifting equipment. Vremac provides solutions that allow operators to continue to work where it may otherwise not be possible, as sales manager Jacco Lemmen explains: “During the last two years we have developed a Passive Heave Compensation System (MaXine), which makes it possible for cranes to operate within a wider weather window, meaning with higher sea states and stronger winds.”

The system is called MaXine and has been specifically designed for offshore operation, where challenging conditions are regularly encountered. To overcome the problems caused by the oscillation of waves when hoisting or lowering loads, the MaXine range of heave compensators can be positioned between the crane hook and the load to keep the rope taut at all times. The system reduces the peaks and troughs caused by heavy sea states by following the roll of the ocean, which crucially allows work to continue safely and in a controlled manner. The design of the MaXine system incorporates several features that make it an ideal solution for operators seeking to increase the possible scope of operations in harsh environment. For example, it offers independency from special heavy lifting equipment that results in a significant cost reduction in exploration when combined with the increased weather-window. The system is also exceptionally diverse in that it can be applied to all crane types and does not require special lifting frames or an external power source. MaXine also features compact design that can be applied both above and underwater, making the unit suitable to a host of applications where sea states or wind conditions compound lifting operations. Furthermore, the system is diverse enough to offer remedies to additional problems that are sometimes encountered during crane operation. For example, through the application of an external power source it is possible to boost the rate of an otherwise slow hoist speed. It is also possible to exercise multi-step transfer to combat low shock absorption levels.

IHC Vremac has designed a range of MaXine heave compensators that are capable of handling weights between 25 and 500 tonnes. The effectiveness of the system was demonstrated through a series of tests carried out in the 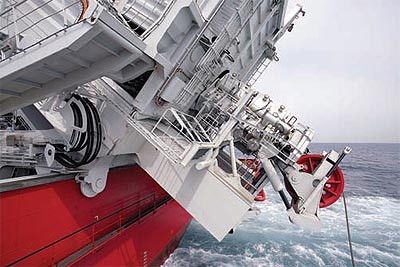 harbor and at Vremac Cylinders’ headquarters, in co-operation with Biglift and Mammoet. A 12.2 tonne crane utilised the MaXine 50 unit to hoist a heavy plate from ground level. The crane’s hoisting ropes were gathered together into a single shackle, which was connected to a quick-release hook that was in turn welded to the plate itself.

The hoisting of the crane led to the extension of the MaXine 50 in much the same way as a spring and when the quick-release hook was activated, the MaXine contracted and the plate was pulled upwards. The hoisting speed, height and combination of natural frequency and damping were all important parameters highlighted by IHC Vremac and the first three successive demonstrations were measured and proved to be exactly correct, a clear indication that the MaXine 50 is fit for purpose.

“We received some useful feedback from the crane driver, who was initially sceptical about the demonstration,” says Jacco. “However, his opinion was transformed when the hoisting of the deadweight ran so smoothly. The energy generated by lowering this weight was successfully consumed by the acceleration of the remaining load and the weight of the MaXine 50.”

The company’s years of experience, and the initial market research carried out by Vremac at the beginning of the MaXine project, suggested that operators rely on specialised heave compensation equipment sporadically for periods of between a few weeks and two to three months. This in turn meant that clients were interested in finding a cost-effective rental solution rather than buying systems outright and this has become the strategy adopted by IHC Vremac in marketing its new design. “We have invested in a range of MaXine systems for the company’s rental fleet,” explains Jacco. “The main purpose is to increase the cranes’ weather window and allow them to work with higher sea-states so that crane and load will be handled safely. The client does not need to make any adjustments, it is possible to simply use the system and it will decrease the forces acting on the crane and increase the weather window safely to sea state 3 (Northsea).”

Next to the MaXine developments major cylinder projects are passing by: “Winning a large tender, which includes 32 hydraulic cylinders for the existing Panama Canal, which were delivered in 2013 and installed early 2014 was a next step in becoming a well-known global supplier,” says Jacco. “Rolling out the international strategy is an exciting time for the company. We are also displaying the MaXine system at various trade shows to increase the product’s visibility outside of the Netherlands and working to increase the size of its rental fleet to meet the requirements of its clients.”