Back to Profile Gallery > IKM Subsea AS

Operating as a business division of the IKM Group, IKM Subsea manufactures ROVs and trenchers, which are operated on a contract basis with clients.

The origins of the business extend back to 2000 when electric trenching systems were first developed and sold into the market. In 2007 IKM Subsea was formed, which utilised this technology to develop its own ROVs, the first of which was sold in 2009. In addition to the rental of its ROV and trencher systems, IKM Subsea also provides a competent personnel team, such as pilots, 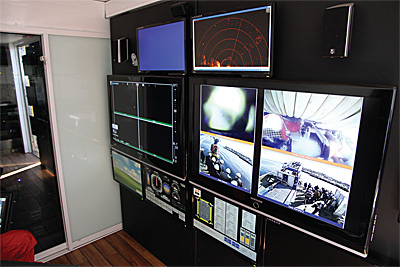 technicians and supervisors, who are experienced in the operation of these vehicles.

With its headquarters in Norway, naturally one of IKM Subsea’s key markets is the North Sea. The company is also growing its position within the Asian market, both through its own offices and representative sites in India and China. Ben Pollard, managing director, explains: “Part of the IKM Group policy is that we follow our clients’ activities into different markets and countries. At present we are in the midst of establishing daughter companies in Malaysia and Singapore. Singapore will be the base of our operations within Asia and will enable us to undertake clients’ projects on a local basis. With regards to long-term aims we want to establish ourselves in all the major oil and gas offshore sectors, such as Perth, Brazil and West Africa.”

Known as the Merlin, IKM Subsea’s ROV systems represent a new generation of electrical work class ROV, with increased reliability and performance. Commenting on thistechnology, Ben says: “Our ROV technology is a little different to the traditional systems on the market, which have an electro-hydraulic propulsion, whereas our machines operate a solely electric propulsion system. At present our ROVs still incorporate hydraulic tooling, as this is what the market is used to. Since 2009 we have built a further four ROVs, three of which are operating under long-term charters with vessel owners.”

As well as this propulsion system, the Merlin class ROV has a composite material frame and intuitive man-machine interface. IKM Subsea produces custom made and in-house ROV tooling, utilising its computer numerical controlled (CNC) machining workshop to produce different specifications inline with customer requirements. At present the company’s product portfolio consists of the Merlin WR200 ROV, Merlin LR120 ROV and the Merlin Trencher. The Merlin ROV is specifically designed for working in harsh conditions, with additional deepwater capabilities of up to 3000 metres depth. In order to optimise reliability, the Merlin has an open frame, double manoeuvring systems and a back up solution, which handles all critical functions and processes.

The company’s high performance Merlin trencher is designed to be the most effective low weight electrical trencher on the market. Consisting of a non-corrosive buoyancy filled frame, which reduces the overall weight and drag coefficient, the Merlin trencher has ten electrical thrusters that increase its work capacity in strong currents. In addition the system features an extra long jet sword, producing 2000 cubic metres per hour of water flow, increasing mass displacement and enabling excavation of up to three metre deep trenchers for cable or pipe burial. 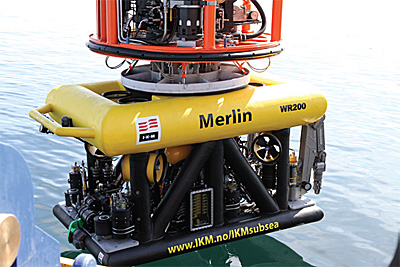 In order to maintain its position at the technological forefront of the industry IKM Subsea strives for innovation within its product range. “At present we are developing a compact version of our ROV system, which despite having smaller dimensions will be a very powerful machine,” highlights Ben. “This is being engineered to operate within jackets and other structures that larger vehicles cannot fit into. One of our main focuses is to be able to provide, not just fully electric ROVs, but also electric tooling capabilities, and so we are currently working with ABB Robotics to address this.”

Notably, IKM Subsea has recently secured contracts with Olympic Shipping and Solstad Offshore. The company is delivering two Merlin WR200 ROVs to Olympic Shipping on a two-year contract estimated to be worth approximately 100 million Norwegian Kroner. In addition to the vehicles, IKM Subsea is also supplying personnel, engineering services and operational support to Olympic Shipping. Reflecting on the reasons behind the contract, Ben adds: “Increasingly we have seen a large market potential for the supply of ROVs directly to vessel owners, as opposed to the traditional supply of vehicles to charter companies, who in turn would approach these operators. In line with this, we identified clients who could benefit from our services and contacted them. A key aspect of the business is that although we manufacture ROVs, our capabilities don’t end there – we also supply engineering and project management services as part of a complete package.”

IKM Subsea has also completed projects in the UK North Sea renewable energy sector, and is looking into projects with oil and subsea construction companies for 2011 and 2012. “The subsea market has taken a bit of a downturn following the economic crisis, however we have still been able to gain long-term ROV projects. This in part is due to the booming renewable energy market, particularly in the UK, which has continued to provide vessel owners with work. I believe that we will seen an upturn in the market in 2011, and 2012 particularly, and as a relatively new company we are using these years to position ourselves in the market. As well as manufacturing ROVs to meet our contracts, we are also producing some in preparation for this upturn,” describes Ben.

With the company’s advanced ROV systems and flexible approach continuing to win projects on a global basis, Ben concludes with his aspirations for the business going forwards: “We are currently building six more ROVs and our strategy is to continue to manufacture and put into operation a further six each year. Over the next few years we would like to grow our market share in the Norwegian market to 25 per cent and be achieving a turnover of 50 million pounds including world wide operations. As well as long-term projects, we also rent some of our vehicles on the short spot market, which help to balance out the business. In the next five years I would like us to be operating 25 ROVs across the market and be established in three or four of the major oil offshore hubs around the world.”