Back to Profile Gallery > Inver Energy

Inver Energy began life in 1983 as a supplier of industrial fuel oil and steam coal in Ireland.

Having established a firm presence in this market, in 2004 Inver Energy entered the marine fuel sector, where it has grown into one of the largest fuel suppliers in the country. The company was also a pioneer in the Irish market in setting up a marine bunker barge service in the Shannon Estuary. Following the purchase of the Fuel Oil and Marine Marketing (FAMM) UK operations of Chevron Texaco, the business made the move into the UK market. At this time Inver Energy also acquired an oil import terminal in Cardiff.

As a result, today the business is a leading fuel supplier and oil storage company in both the UK and Ireland. Its Cardiff terminal boasts a capacity of 58,000 cubic metres for the import and storage of bio-fuels, diesel, fuel oil, gasoil and kerosene, which is used to supply the needs of the UK fuel oil and marine fuel markets.

In 2008 the terminal underwent further upgrade with the conversion of 30,000 cubic metres of tank capacity from fuel oil to clean distillates, the installation of two bottom-loading gantries, and a new bio-fuel blending system. Following this work, Inver Energy has established a long-term agreement with independent petroleum company Mabanaft for the use of the terminal’s distillate tanks.

Inver Energy made a further addition to its portfolio in 2009 with the acquisition of Maxol’s oil business based at Foynes in Ireland. This included local distributor, Estuary Fuels Distribution, and Maxol’s oil importation business at the Irish Bulk Liquid Storage terminal. This acquisition further expanded Inver’s product range to include petrol, diesel, gasoil and kerosene. This acquisition grew Inver’s storage capability in Ireland to 43,000 cubic metres and was used to support a similar range of activities to its UK facility.

As suggested by its wide variety of products, Inver Energy is active within a number of markets, as catered for by its five divisions – Inver Industrial, Inver Marine, Wholesale Oil Distribution, and Commercial & Agricultural. Inver Industrial supplies clients across a range of industries including construction, food, government, power generation, mining, and pharmaceutical, with a full range of industrial fuels for steam boilers, dryers, and furnaces.

A registered Marine Fuel Supplier in the Republic of Ireland and UK, Inver Marine is also a member of the International Bunker Industry Association. The business supplies a complete spectrum of marine fuels through a network of ports across the UK and Ireland to clients such as bulk carriers, container ships, ferry operators, tugs and dredgers, and reefers. 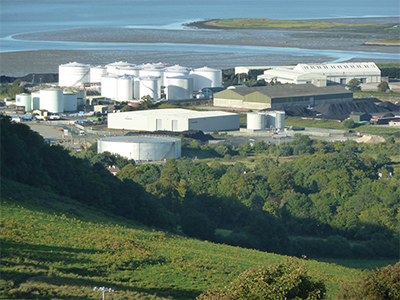 Fuel distributors are also catered for through Inver Energy’s Wholesale Oil Distribution service, which offers this market a whole host of products with flexible supply options. One of the company’s defining strengths is its unparalleled supply security. With a portfolio of large storage facilities, Inver Energy is able to ensure that it has products available, as customers require them. Distributors are able to place orders with Inver Energy, which will retain the stock in its terminals until the distributor is ready to take delivery.

Alongside the business’ primary activities, Inver Energy formed a 50/50 joint venture with East Cork Oil Company in 2007, known as Atlantic Fuel Supply Company Limited (AFSC). Based around the construction of a new 82,000 cubic metre terminal in Foynes, the facility, which is fully compliant with post-Buncefield specifications, began operating in early October 2010. In addition, AFSC has rented from Simon Storage Limited the 14,000 cubic metre Irish Bulk Liquid Storage (IBLS) terminal, which is located adjacent to the new AFSC terminal. In turn, Simon Storage has been appointed to manage and operate both terminals.

Together, the combined 96,000 cubic metres storage capacity of the AFSC/IBLS complex makes it the largest inland oil terminal in the Republic of Ireland. The AFSC terminal consists of 16 tanks with storage capability for aviation fuel, diesel, ethanol, FAME, fuel oil, gasoil, kerosene and petrol. Operating on a 24 hours a day, seven days a week basis, the terminal has five loading racks, as well as a two-berth jetty system. Located on the west jetty in Foynes Harbour the first is a deepwater berth capable of handling vessels of up to 35,000 tonnes, whilst the second is a separate mooring dolphins berth with a capacity for vessels up to 7000 tonnes.

2010 also saw Inver Energy announce plans for the development of new fuel tankage and distribution facilities at its oil terminal in Cardiff, through a new long-term partnership with Greenergy – the largest supplier of road transportation fuels in the UK. Due for completion in autumn of this year, the project incorporates both the construction of new tankage, as well as refurbishment of existing tanks for petrol and diesel. New rail receiving facilities will also be created at the site. The partnership, and subsequent development, is designed to strengthen the road transportation fuel distribution capability within an under-supplied part of the UK, where infrastructure facilities are currently insufficient to meet the demand for fuel in the area.

For more than 25 years Inver Energy has helped its customers manage their fuel and energy needs, through a core understanding of how these fit within a clients’ business. Whilst the business has a long track record of delivering basic requirements such as high quality products, secure and reliable supply, competitive and flexible prices, and on-time delivery, Inver Energy is also recognised for going beyond basics to provide innovative fuel and energy solutions that offer its clients a competitive edge.