Back to Profile Gallery > IOS InterMoor

An anniversary to remember

“In June 2010, IOS Offshore, as the company was previously known, was sold to the Norwich based, international offshore service provider Acteon.

This group is made up of 17 different companies and one of the areas in which it specialises in is moorings and foundations, a field that IOS Offshore had long been established in,” explains David Smith, managing director of IOS InterMoor. “Acteon already had an existing entity called InterMoor based in locations around the world and the decision was made to integrate IOS Offshore into this business, a process that went incredibly smoothly, mainly because of how much the two parties already had in common.”

Immediately the formation of IOS InterMoor paid dividends, with the new company gaining access to experience and equipment from markets outside of its home base of Norway: “Acteon already boasted a global footprint with operations based in the US, UK, Mexico, Brazil, West Africa and South East Asia. Being a part of this global network gives IOS InterMoor the chance to provide its core services in all the major oil and gas hotspots. Therefore there can be little doubt that the company’s move from being focused on just the Norwegian market to being part of a worldwide provider of mooring services has been a very positive one indeed,” David continues.

Even as the company becomes more internationally focused, it has made a concerted effort to stay true to the values and characteristics that see it celebrating its 25th anniversary in 2011: “IOS InterMoor has always wanted to maintain its local identity, something it has done by retaining the IOS name, while also capitalising on the global nature of Acteon’s business,” David enthuses, before going on to reveal just what reaching a quarter of a century in age means to the company. “The ups and downs of the offshore oil and gas sector put an incredible amount of pressure on supply businesses. As such IOS InterMoor has had to learn how to not only expand to meet times of increased demand, but also not to over extend itself so that it doesn’t get caught out during business slowdowns.

“Being in existence for 25 years and counting is proof positive that IOS InterMoor has become equipped to manage the peaks and valleys experienced by the industry, something it has achieved on the back of three core principles that have never once changed, safety, quality and delivery. These principles will remain for as long as the company exists and have played a massive part in helping secure a fantastic client base, clients that come back to IOS InterMoor year after year, some of which the company has been working with since its first year in business.” 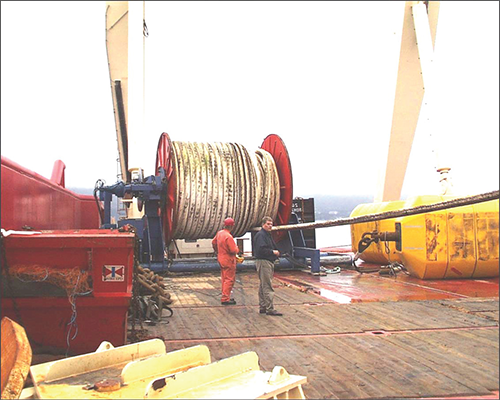 Another way of maintaining these strong working relationships, and attracting new clients at the same time, is to develop new ways of meeting the latest demands and requirements. An example of the company’s innovative work can be seen in the new Inter-M Pulse: “This product provides direct inline tension monitoring of the mooring line. This is obtained through a combination of different technologies including pulse structural monitoring applications that gage tension and the InterMoor H Link, a product that connects various mooring components together. Integrating these technologies together creates a product that can be inserted into the mooring line, giving continual line load monitoring and information regarding the inclination, orientation and curve of the line,” David says. “This information will prove invaluable to a number of different operators and IOS InterMoor sees it being used predominantly on FPSO units in a permanent line load situation.

“As well bringing its clients the latest innovative products, the need for the company to be logistically positioned to best serve the market is equally as important. Historically oil and gas clients have been served from the company’s head office in Stavanger, yet as the last year has shown there are high levels of activity coming from locations such as Bergen and the Mongstad area. In order to capitalise on this IOS InterMoor has moved to establish a 1000 square metre enclosed workshop with an outdoor storage area and office complex that will open by the beginning of 2012.”

The market conditions of today certainly appear favourable for IOS InterMoor and this has allowed David and his team to plan for an exciting future ahead: “The company’s number one goal is to maintain its position as the preferred supplier of mooring equipment in Norway and the surrounding area. This will be achieved through a combination of good investments, the buying of quality products and providing the best logistical positions to all of its clients. It is inevitable that the company will go on to entertain more global business opportunities, especially now that it has the ability to export its capabilities and experience via Acteon’s global network. However, it will continue to maintain its strong relationships with its sub contractors that have always succeeded in supplying the very best products in terms of quality and reliability.

“IOS InterMoor is incredibly proud to be celebrating 25 years in the industry and knows that it wouldn’t be where it is today without the support of these suppliers and, just as importantly, its customers. This company is very thankful for its client base and looks forward to serving it for at least another quarter of a century.”