Back to Profile Gallery > IRATA 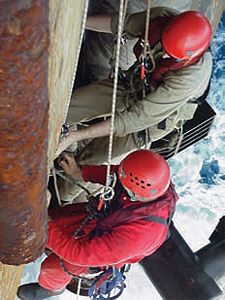 “At that time the essential safety regime of the rigs in use was being prejudiced by the use of the heavy equipment needed to, for example, paint, inspect and repair the important cranes.

“There appeared to be no alternative to this until climbers and cavers successfully demonstrated that modern, slim ropes could be used to get work teams to almost every part of the rig, doing so without causing any disruption to the main work taking place on the platform. Subsequently these individuals would come together to create the industry body known as IRATA: The Industrial Rope

Access Trade Association.” Today, IRATA International has member companies in every continent. Wherever offshore oil and gas work is taking place IRATA teams can be found inspecting, maintaining, repairing and cleaning all areas of the structure. This work aside, the association has also provided proven working solutions for a number of other tasks that were previously seen as either too difficult, time-consuming or not easily handled by men on ropes.

In a great number of the countries and regions in which it operates, the oil and gas industry has had to evolve to harness deep-sea oil fields for the first time. In the process of doing so these companies have benefitted hugely from IRATA’s track record of extensive training, strict work guidelines and its commitment to safe working. As rope access has become even more of a proven asset to the offshore industry, IRATA has grown where this field of expertise has developed, something it expects to continue.

“Every now and then a business solution emerges, seemingly out of nowhere, and this was really the case with IRATA rope access,” Rod continues. “From its very first undertakings in the North Sea, the IRATA commitment to safe working has been one of the fundamental factors that have encouraged the greater use of rope access. What the association has since discovered is that the ease of access it provides and its ability to remove equipment and structures from site at equal speed has eliminated what were at one time serious sources of headaches for operators.”

As Rod goes on to highlight, it is also the adaptability and degree of flexibility provided by rope access teams that has impressed all of those companies that now utilise the procedure: “This simple access method has certainly moved far beyond the cleaning and maintenance work it started out being used for. In more recent times it has become the first working method operators turn to when approaching projects that would traditionally not have been considered for rope access applications. The substantial savings offered by the minimal amount of equipment needed and the quick speeds of access and egress have really captured the attention of the industry during a period of time marked by economic uncertainty and the need to cut costs.

“Furthermore, the recent work undertaken by IRATA teams around and inside the legs of platforms has once again highlighted the vast range of work that rope teams can successfully perform. It is developments like this that the association believes will lead to larger rope access work teams taking on a wider range of work over the months and years to come.”

The biggest issue that continues to dominate the industry as it relates to rope access operations is safety at work. It is IRATA’s belief that only a global approach to stringent training programmes, alongside clear and safe working methods, will allow high standards to be maintained. While it is well aware that the vast majority of oil and gas companies remain in a position where cost cutting is a necessity, IRATA is committed to offering efficient and effective services that avoid complex and costly machinery, while promising to guarantee no half-measures are taken at any time.

“IRATA’s onshore and offshore activities are today, more than ever, proving themselves as being able to solve even the most unique and complicated workplace problems,” Rod enthuses. “The growth of the association is clear for all to see as it strives to double its 230-plus member profile in the next five years, while at the same time employing many thousands more rope access workers.

“In its lifetime IRATA has shown that advanced technology is not always the solution to the issues faced by the oil and gas sector. Rather, its simple method of access is in many ways a phenomenon that is as at home on some of the world’s greatest structural landmarks like Big Ben and the Hoover Dam, as it is in the world’s oceans.”