Back to Profile Gallery > Irish Mainport

Founded in 1957, the Mainport Group has grown to become a leader in the provision of marine services to ship-owners, exporters, importers, oil companies, seismic survey companies and others involved in the maritime trades.

Today the Mainport Group trades in Ireland, South America, the Middle East, Africa, Malaysia and the European Union. It has four offices in Ireland, based in Cork, Foynes, Limerick and Drogheda as well as offices in South Africa, Angola, Canada, Brazil and Singapore. Its fleet consists of 11 vessels, including tugs, platform supply vessels, and seismic support and chase vessels. Mainport currently employs 200 people covering its shipping, stevedoring, agency operations and worldwide crew. This dedicated team of enthusiastic, experienced and talented personnel is key to the group’s success – the staff are all highly qualified in their fields, and have developed the 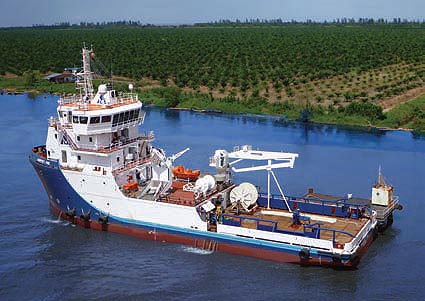 knowledge and expertise needed to deliver imaginative solutions to virtually any challenge. Valuing all customers equally, the team strives to provide the best possible service through open dialogue and close working relationships; a winning formula that has resulted in long-term clients, some of which have worked with Mainport for more than 40 yea s.

As marine director Captain Dave Hopkins noted, the company has had an interesting history, evolving as it has from Ronanye Shipping – a one-man company originally founded by Finbarr Ronayne. Over its five decades of history the Group has experienced mergers, acquisitions, and continuous additions to its fleet in order to become a leading maritime organisation, with worldwide operations.

When it comes to the oil and gas industry, Mainport provides supply base operations for the exploration companies that work offshore Ireland, and historically over the years most of the major companies have been serviced by Ronayne Shipping on the Irish Coast including Marathon, Texaco, Exxon Mobil, Providence, Conoco, British Gas, Chevron and many more.

Capt Hopkins’ own career has also evolved alongside Mainport Group – he came on board in 1979 serving as a master offshore in the company’s offshore supply vessels and then as marine superintendent and marine director from 1987 and became a shareholder in 1994. He gave a bit more detail about the services provided by Mainport to the oil and gas industry today. “The main services provided on land are oil base management for all the oil companies exploring offshore Ireland,” he said. “This works together with the stevedoring and agency business for the wind farm business, and other import and export business within Ireland.”

The company’s tugs provide berthing and unberthing services for ships mainly on the Shannon Estuary, but also in other Irish Ports where requested as well as coastal towage and salvage. “One of our MRV’s supports the two platforms and Kinsale Gas Field and has done so since 1979. Our seismic fleet operates on a worldwide basis and supports the major seismic companies fleets in their various programmes around the world. Presently we have 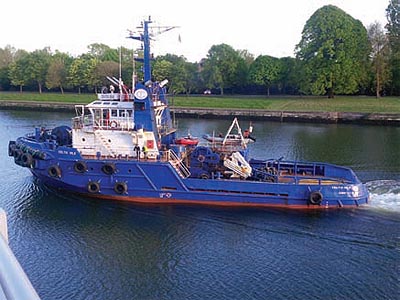 vessels in Canada, Equatorial Guinea, India, Qatar, and the North Sea,” he added. “In the offshore business here in Ireland we are working with Kinsale Energy, Providence Resources and Exxon Mobil, while our seismic support vessels are at work for Western Geco, CGG and Dolphin.”

Mainport has recently taken delivery of two new seismic support vessels to the fleet, delivered in 2013 and purpose-built to address the needs of clients. Added Captain Hopkins: “They are deployed worldwide with the Mainport Cedar working from Qatar with WesternGeco on a shoot for Total and the Mainport Pine based out of Halifax Nova Scotia working on a WesternGeco shoot for BP.” They support the fleet worldwide in fuel supply, stores, crew changes, and towing and escort/chase duties where required.

Although Mainport is seeing good results from its seismic vessels, Captain Hopkins believes that the seismic support market is probably static now, ‘as some seismic companies move to de-rig older seismic vessels.’ He highlighted that new vessels are a challenge that the company must tackle going forward: “Building new vessels to replace older converted tonnage at a realistic price that suits the seismic companies and achieving long-term charters for them, is going to be something that the industry has to address,” he said.

In order to maintain and grow its business while some markets are returning to full growth, Mainport focuses on safety in order to stand out from the rest of the competition. “We work very hard to maintain a very high level of safety in all our operations and this is evidenced in the high marks we continue to achieve in our audits from our customers,” confirmed Captain Hopkins. “Mainport’s long-term business success depends upon the ability to continually improve product and service quality while safe guarding people and the environment.”

The company also adheres to the highest international standards including those set by Class and Flag State, ISM, ISPS, and ISO 9001. It is also a member of many of the trade organisations in areas where its fleet operates, including ISU, ETA, ERRVA, ICOS, ISAA and others.

As the second half of 2014 unfolds, Mainport is planning further growth, as well as working on a few new projects for offshore vessels. “We are working and if they come to fruition, then 2014 could be a very interesting year,” concluded Captain Hopkins.