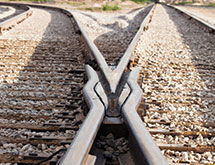 Started in 2013 by brothers Khory Ramage, president and CFO, Kyle Ramage, founder and CEO, and David Hoekstra, Ironhorse Permian Basin is building out its new transload facility in Artesia, N.M., to achieve even greater success.

“What we are offering is a one-stop shop for well service companies,” Khory Ramage says. His vision is to create this service for energy companies and provide the convenience of rail to transport frac sand, water, crude oil, cement, chemicals and pipe once the terminal is complete.

Constructing the Artesia facility in concert with BNSF Railway Co. entailed a long planning and design phase. Information from other oil plays aided in the successful planning, he says.

Ironhorse Permian Basin’s design is to prevent bottlenecks in the terminal. “Logistically, we have to make sure a locomotive will not be blocked in and there is enough space for empty cars,” Khory Ramage says. It will be a unit-train terminal allowing for faster, delay-free travel times and discount pricing. Unit-train allows for “dramatic cost cuts and it reduces the labor required for the railroads,” he notes.

Good Beginnings
Frac sand started arriving at the facility in July 2014. A new loop track is to be completed and storage silos are slated to open sometime in the first quarter of 2015.

“We are in the initial staging and development phase for the silos,” Khory Ramage says. “It is going to be state of the art.” This storage plays a key role. “When you have such a vast oil play as we do here, you need to be able to offer a large amount of storage.” That allows trucks to be in and out quickly in six to eight minutes to ensure they arrive to the wells on time.

Khory Ramage has an extensive oil and gas background, managing more than a billion dollars in oil assets over a decade. The brothers’ impressive resumes have helped their young company grow. “We have been able to recruit business partners and employees with extensive experience,” Khory Ramage says. “It has been an exciting process.”

The Ironhorse Permian Basin team also includes COO Kenny Van Winkle and Vice President of Operations and Safety Paul Pappas. With more than a decade of experience at Rusty Spike and Double K Recycling, Van Winkle oversees Ironhorse’s rail terminal, and Pappas, a former insurance executive, handles safety throughout the terminal. Albert Alba retired after 32 years of service at BNSF and experienced dairyman David Hoekstra owned more than 360 acres acquired by Ironhorse Permian Basin. Alba is an advisor and Hoekstra serves on the board of directors for the company. Kevin Ramage, a former hospital CFO, was relocated to help with the day-to-day business operations. Other important players in the terminal operations are Kegan Ramage who will be running a part of the terminal, as well as Jaime Herrera, a former trucking company owner will be also assisting in yard management.

Ironhorse Permian Basin, therefore, is poised to offer subleases to companies interested in locating near the rail terminal. Customers could include trucking companies specializing in hauling sand, water and pipe, for example. “There is a huge benefit to being here,” Khory Ramage says. “There are a lot of vendors and interests serving the oil and gas industry here in the Permian Basin.”

Lifting the ban on exporting crude oil will help those working in the basin and the economy at large, he says. Ramage also predicts the Permian Basin will be “bigger than the Bakken and Eagle Ford basin combined.” Meanwhile, Permian Basin drilling continues to recover more petroleum spurred by horizontal drilling and hydraulic fracturing techniques. “We are still in the early stages of drilling here in southeast New Mexico and West Texas. They will be drilling here for the next 20 to 30 years,” Ramage says. “It is very exciting.”