Back to Profile Gallery > Jutlandia Terminal AS

Owned by shipbroker A/S J. Lauritzen’s Eftf., it has become one of the most important terminals in Denmark and attracts major companies from across Europe. Though heavily invested in the oil and gas industry, the terminal has started including offshore wind energy technology services in its portfolio.

The terminal was established in 1976 as a storage warehouse for citrus and plywood imports, but by 1980 this business had dropped off and J. Lauritzen refocused the site’s services on the offshore industry. At this time the Danish oil business was developing rapidly and, because of its location facing the North Sea, Jutlandia quickly gained contracts with major companies such as Halliburton and ConocoPhillips. In 1986, J. Lauritzen became a joint owner of Seaport Stevedoring, allowing Jutlandia to add loading and offloading services to its portfolio.

Kristian Svarrer, managing director of J. Lauritzen, explains that the port’s services can be split into three categories: “The first arm is stimulation vessels, and they are a big part of what we 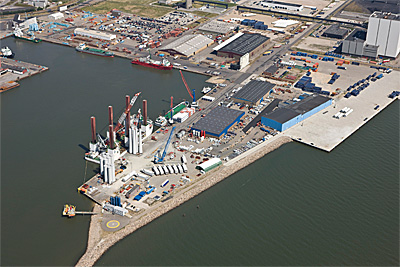 service. We have the sand and storage they need, do the agency for them, and if they have any mixing needs such as brine or gel we provide those too. The second arm is being an offshore base, particularly for Hess Denmark. Though based in Copenhagen, all of its warehousing and office facilities are located in Jutlandia, and we are responsible for loading and offloading its vessels. The third part of what we do is handling of production chemicals; 99 per cent of the production chemicals going to Danish oil fields through Maersk Oil, Hess and Dong Energy come from us, as we are the only company in Esbjerg certified to handle them. All three arms share an equal split in our work.”

One function of stimulation vessels, which are used to encourage greater oil well productivity, is to make use of acid for both fracturing and damage control. To provide this acid, and so a complete package for stimulation vessels, Jutlandia works in close co-operation with Esbjerg-based company Copco. The success of this partnership can be seen in the Jutlandia’s clientele, with companies such as Halliburton, Stimwell, BJ Services and Schlumberger, when doing workover and stimulation jobs in the British and Norwegian sector, choosing Jutlandia for its services and unique local facilities.

Kristian puts this down to the knowledge and hard work of the terminal’s staff: “As a service provider we have had 25 years experience, and if our service wasn’t good enough our clients would of course move elsewhere. Looking at servicing stimulation vessels, I believe we offer a comprehensive package with a focus on quick vessel turnarounds. That’s where we shine.”

In recent years, the terminal has started taking responsibility for the delivery of both offshore and onshore wind technology. Its main client in this area is Siemens Wind Power, and through it has been involved in major wind farm projects such as Horns Rev 2, Lynn and Inner Dowsing and Gunfleet Sands.

The last couple of years have been tough for Jutlandia, with its stimulation vessel business being impacted heavily by Maersk’s decreasing activity in oil and gas. Despite this, however, the company has weathered the storm well and in its 2009/2010 turnover achieved 62 million Danish Kroner. This can be attributed largely to the terminal’s other two business areas as an offshore base and chemical mixing facility. Both have remained steady throughout the years and, due to J. Lauritzen’s diligence in maintaining minimal debt, Jutlandia has coped with a harsh economic environment.

The immediate future looks to remain on this course, but with North Sea oil beginning to disappear there may be an increasing demand for the terminal’s chemical mixing facilities. As the wells run dry more chemicals will be needed for extraction, and Jutlandia is ideally situated to offer such services. Ultimately, however, for the terminal to continue further into the future it will need to start moving into new areas, both industrially and geographically. Already gaining good ground in renewable energy, the company is also looking to move further afield with its contracts.

Concluding, Kristian highlights this: “I hope that we will start moving abroad because we want to be part of the emerging markets such as Brazil, Africa, Kazakhstan and Azerbaijan. Though it is not a strategic focus for us right now, oil in the North Sea is decreasing and at some point it is going to stop. To not lose our clients we will have to move with them out of Europe over the next five to ten years. Though we see a big market in offshore windmills, we will always focus on oil and gas because that is where we come from.”