Back to Profile Gallery > Koop Watermanagement

From humble beginnings as a water well driller for local farmers in 1969, Mr G Koop’s business has developed over the years to become a highly experienced provider of dewatering services for pipeline construction.

Drawing on over 40 years of expertise, the contractor and consultant has all necessary international certificates for quality as well as up-to-date equipment and well-trained personnel to ensure state-of-the-art solutions for a comprehensive range of infrastructural projects. “Our first major project for lowering groundwater for gas pipelines was in 2001; today we have completed more than 3000 kilometres of major gas pipelines for dewatering activities,” says Mark Kuipers, marketing manager of Koop Watermanagement.

Since it was previously featured in European Oil & Gas Magazine in April 2012, Koop Watermanagement has continued to work primarily in Europe, while also setting the foundations for further growth with the establishment of Koop Watermanagement Middle East in 2013. Meanwhile, having gone from strength-to-strength over the years, the company has taken on increasingly more challenging projects. None so challenging than the completion of a 90 kilometre pipeline for NV Nederlands Gasunie, which is working on the Dutch Government’s ambitious gas roundabout concept; the aim of which will see the Netherlands become a critical part of a major gas hub for Northwestern Europe.

“We started 2013 working on the most complex project in our history – a 90 kilometre gas pipeline based in the Netherlands. The pipeline was placed in a wetland area with a high groundwater pressure in the soil, so when Gasunie’s contractor began executing the ground for laying the pipeline there was a danger of bursting the bottom of the pitch. As a result, our geo-hydrologists had to make many calculations and models of the applicable dewatering systems. The challenge lay mainly in the translation of theory to dewatering techniques in practice,” says Mark. 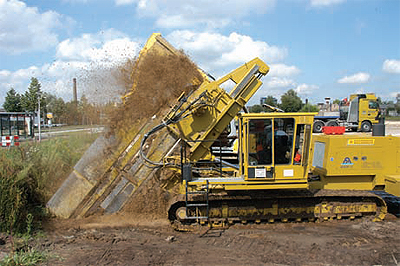 “Our activities were dealing with the groundwater pressure from beneath the excavation point so the bottom will be intact and they could then safely lower the pipe into the ground. It was an extremely complex andintensive project for us, with a lot of materials, pumps and personnel used; for similar lengths of gas pipeline projects we have around 25 to 30 personnel on site, however, for the heaviest point of this major project we had almost 50 personnel working,” he adds.

Subcontracted by a number of contractors and joint ventures for the necessary dewatering of approximately 50 per cent of Gasunie’s major500 km long 48 inch gas transport pipeline project. Main contractor A. Hak used Koop’s expertise, expansive fleet of machinery and personnel for the complete scope of dewatering for the construction of the last gas pipeline project Beverwijk-Wijngaarden Lot one and two. Totalling at 60 kilometres, the work for A. Hak required an ambitious schedule to ensure the five construction spreads could fully run during peak periods. Successfully overcoming these logistical challenges, Koop used the just in time principle for installation to complete the job with its own resources; this included 50 employees with pick-ups, three drilling rigs, three trucks, 400 pumps, 40 kilometres of discharge pipe (mainly six inches, ten inches and 12 inches), as well as de-iron sand filter systems. “We have a large fleet of equipment, with several machines and a number of trenching machines for horizontal drainage, which means we supply almost everything ourselves throughout a project,” highlights Mark.

During extraction, the company used its own trenching machine to install drains at a depth of 3.5 to five metres below ground level, installing a total of 35 kilometres in drainage. Meanwhile, to control high water pressures in the polder area, Koop Watermanagement installed its drilling rigs on a heightened position, up to two metres above ground level. This helped to create overpressure, which enabled the company to reach its required depth. Throughout the project, the company drilled and installed more than 500 pressure relieve wells; these had a diameter of 250 millimetres and were executed with three drilling rigs and expert teams. In addition, the company combated the challenge of multiple soil layers to install gravy filters, which have water flow into them by gravitation. These were installed at a depth of nine metres to achieve the necessary drawdown.

Another major challenge was the extraction of saltwater, which meant discharge could only be done into surface water that consisted out of saltwater; because the pipeline route had very few of these discharge points available, multiple pump stations were installed. Meanwhile because of the high levels of iron in the groundwater and the high requirements of the water authority, Koop installed groundwater treatments up to 250 m3/h to lower iron concentration. A continuous dewatering operation at this pipeline construction shall be provided to keep the excavation stable and free of water. The groundwater levels at the excavations and the quality of the extracted groundwater are continuously monitored to ensure the pitch remains stable, free of water and we don’t cause any environmental damage.

Following this major contract, the dynamic firm is due to start working with Belgian gas supplier Fluxys on its new pipeline, which will run from its new LNG terminal once it is constructed. Furthermore, Koop will also be targeting opportunities in the growing gas pipeline in Belgium and France, as Mark concludes: “At the moment there are a lot of gas pipeline activities in Belgium and France in comparison to the Netherlands. However, Gasunie has started a large-scale maintenance project called GNIP, which will involve the replacement of valves, piping diagrams and other equipment. We also have some activities coming up in the German market such as dewatering projects for new gas stations. Currently our work in the Middle East is focused on the construction industry, but we anticipate potential opportunities in the oil and gas industry in the future.”