Founded by Edward Singleton in 1967, initially under the name Introl Limited, with the aim of providing a specialised control valve service for the expanding UK energy and petrochemical sectors, KOSO Kent Introl is recognised as one of the worldwide leaders in the design and manufacturer of surface and subsea control valves and choke valves, severe service valves and engineered specials.

“Primarily operating in the offshore, upstream oil and gas market, the company today specialises in providing valves for use on terminals, FPSOs, platforms and subsea applications,” explains Denis Westcott, managing director of KOSO Kent Introl. “While the market in general clearly felt the far-reaching effects of the global economic slowdown, this area of business has come back very strongly over the last 12-to-18 months.

“The progressive move away from platform use towards FPSOs has certainly been a driving factor and is one that has also resulted in the upturn of the company’s choke valve activities. In real terms, the previous financial year, from April 2011 to March 2012, shows the company’s order book growing by some 36 per cent, which really is a growth figure that speaks for itself.”

Traditionally strong when it comes to attracting business across the North Sea, recent months have seen KOSO Kent Introl move steadily to capitalise on the Brazilian market. Here the use of FPSOs and the undertaking of subsea activities has expanded rapidly and places the country in a strong position where it can become a significant global growth area for the next several decades. 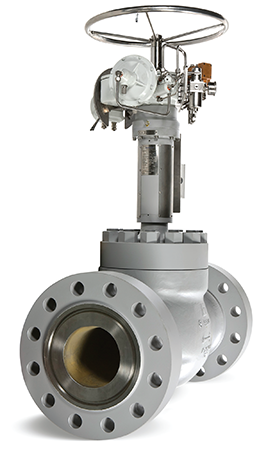 “What separates KOSO Kent Introl from the bigger mass producers of valves is its focus on its adherence to customer specifications and quality requirements,” Denis continues. “While these mass producers like to stick to standard specifications, KOSO Kent Introl is able to accommodate the needs of individual end users. When it comes to the products the company manufacturers, all of the castings are created in the UK by approved foundries. More often than not these foundries are also NORSOK approved, which in itself gives these products a certain mark of quality.”

KOSO Kent Introl’s work in the subsea sector actually dates back more than 20 years, however it is only in the last two years that it has re-focused it efforts in this field: “The market has moved on in many regards in that time period, but what the company has done is redevelop its subsea choke valve,” Denis states. “Following a substantial period of PR-2 and hyperbaric testing what we now have is a product range that has the capability of working at depths of between 3000 and 3500 metres. At the same time a number of KOSO Kent Introl’s older customers have come back, looking to have their existing products, many of which were installed 20 years ago, refurbished.

“The big area that the company is also working on at present is subsea control valves. As the market moves increasingly towards subsea processing and compression, where systems would previously have been used on FPSOs or platforms, customers will increasingly require control valves that will work at depths matched by the company’s subsea choke valves.”

The subsea market undoubtedly represents what the company sees as its largest area of potential development and expansion, particularly when it comes to subsea processing systems: “Looking at the long-term picture of the industry this is a market that in two decades has the potential to result in big business,” Denis says. “Due to the very nature of the work involved the utmost quality standards must be adhered to in order to ensure these products do not run the risk of failure several miles under the sea. On that subject, KOSO Kent Introl has approximately 600 subsea choke valves installed around the world and to date it has yet to receive one single reported incident involving a valve as it relates to product failure or leakage.”

Being a European producer, arguably the greatest challenge facing KOSO Kent Introl is competition from lower cost overseas companies: “On the one hand, this is a company that possesses the technologies and capabilities that these overseas businesses do not, however, it is a fact that cost is always a concern,” Denis says: “What that means is that KOSO Kent Introl needs to continue doing what it is doing from a technical quality perspective, while also striving to reduce overall costs. This is what the company sees as its biggest hurdle to overcome at this time, however KOSO Kent Introl is in a good position to do so. A profitable company with a strong order book and solid prospects, its goal now is to really maximise its long-term potential.”