Gateway to the future.

Since it was last featured in European Oil and Gas Magazine the Kuantan Port consortium (KPC) has continued to grow and pursue its aim of becoming the leading maritime trade and logistics services centre in the east coast of Peninsular Malaysia and the Asia Pacific region by 2020.

Operating as a multi-purpose port, strategically placed to enjoy direct shipping lanes with China, the KPC is well positioned to meet its goal. However, recent developments in the region, including economic growth and investment in infrastructure, offer the port and the KPC the opportunity to leverage a fast-track route to becoming the region’s leading logistics centre.

Kuantan Port is owned by the IJM Corporation Berhad, which views China as destined to become the world’s largest economy and is keen to see the port take advantage of the region’s economic fortune. Ideally located on the east coast of Peninsular Malaysia, KPC is keen to expand on existing trade between the two countries, as chief operating officer Ir. Hj. Khasbullah A. Kadir elaborates: “What sets the port apart from its competitors is its proximity to the Malaysia-China Kuantan Industrial Park (MCKIP). The MCKIP is a sister site to the China-Malaysia Qinzhou Industrial Park in China and these two sites will generate more bilateral trade between Malaysia and China. Kuantan Port is expected to be the main gateway for this trading channel. The park will boast high value industrial developments like steel mills, aluminum processing plant, edible oil processing plants and other high value industrial developments, which will spur more traffic and cargo throughput for Kuantan Port.”

An integral part of the port’s future could be a deal with Chinese company Guangxi Beibu Gulf International Port Group Co Ltd. The agreement would see a disposal of a 40 per cent stake in KPC for RM310 million by the end of 2013. In return for the stake in the company KPC can expect to see significant investment from Guangxi, with the company set to pour RM7 billion into the MCKIP and surrounding infrastructure, either directly or via joint ventures with Malaysian companies. As of March 2013, IJM and Guangxi have announced that they have entered into a Memorandum of Agreement (MoU). The MoU sets the preliminary price of the disposal and is expected last six months before a definitive agreement is met. During this time the deal must be approved by the Malaysian government, which currently holds a 30-year concession with KPC set to end in 2027. If the deal is approved, the concession will be extended to 60 years, adding a further 46 years to the agreement. 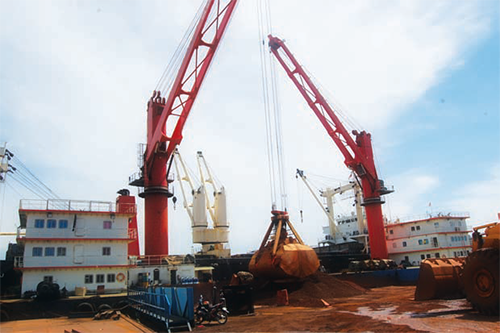 The port has also been identified by the East Coast Economic Region (ECER) master plan as an integrated industrial and logistics hub for the region. The main aim of the ECER is to accelerate growth in the area in a viable, equitable and sustainable manner. The plan identifies tourism, oil, gas and petrochemical, manufacturing, agriculture and education as key drivers in accelerating the region’s growth and aims to compliment existing development schemes. KPC expects the industrial activities to be developed to include the Kuantan Integrated Biopark, bio-fuel industrial cluster, downstream petrochemical cluster, iron and steel industries and automotive cluster. KPC’s close links to China and the recognition it receives from domestic initiatives demonstrate why Kuantan Port is considered the undisputed petrochemical hub in the region, both domestically and internationally.

Kuantan Port is a multi-purpose port operating in all weathers, 24-hours a day, 365 days a year and is able to handle a variety of products including dry bulk cargoes, containers, palm oil, chemicals, petroleum and steel pipes. To cater to its core customers the KPC works to provide infrastructure and equipment as well as to maintain the port. It treats its customers’ requirements as a top priority and goes to great lengths to ensure that the port offers all of the facilities its core users need. It is keen know the future needs of its customers and will visit existing and possible future clients to make sure their requirements are fully understood. The company also has its own marketing team comprised of highly knowledgeable and dedicated staff to drive future business. This level of inter-business communication is a vital component in maintaining Kuantan Port’s position as a key industry hub in the region.

KPC has continued to upgrade and adapt the port to meet the ever-demanding requirements of the palm oil, chemical, container and mineral ore sectors. The port is able to offer palm oil berths, liquid petroleum berths, dedicated chemical berths, dedicated container handling berths, roll-on roll-off berths for vehicles and specialised equipment for handling dry bulk cargoes. It is also able to provide a host of ancillary services including on-dock depot services, fumigation, water supply, bunkering, slop reception and warehousing. Recent developments include an expansion to the port with the construction of a new RM3 billion deepwater terminal, construction of which is expected to be completed within two to three years. The new terminal will double the handling capacity of the port to 52 million FWT and is also designed to attract larger ships to enable the port to become a transshipment hub in the region. To complement this KPC has recently applied for a license to become a supply base, as well to support the development of the oil and gas industries on the east coast of Malaysia.

KPC is currently positioned to take advantage of a huge upturn in momentum. With China remaining strong and Malaysian initiatives providing stimulus to the local economy, Kuantan Port is set to become a powerhouse in the region as Ir. Hj. Khasbullah A. Kadir concludes: “With the Chinese economy still looking robust and demand for raw materials still strong, Kuantan Port is expected to maintain its current growth momentum. We see the next five years as a very exciting time for Kuantan Port. As the current port is reaching its maximum handling capacity, the construction of the new deepwater terminal will ease the congestion as well as fulfilling the demand for bigger ships in tandem with the evolution of shipbuilding. The partnership agreement with the China Guangxi Beibu Gulf Port Group will also bring in new expertise and capabilities which are much sought after to cater to the demands of the new industries in the MCKIP and ECER region.”