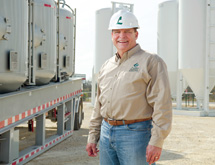 Douglas Cain and his father both found success in starting simple and growing, but the Lake Truck Lines that Cain’s father established in 1949 was far different from the Lake Truck Lines that Cain operates today. The company has achieved 300 percent growth in the past 18 months, and it continues to grow and improve the service it provides to its oil and gas industry customers, while maintaining characteristics that keep it sought after by the market’s big wigs.

According to Cain, his father started with “five of the junkiest old trucks in the world,” and worked out of a small toolshed with one 45-watt light bulb. He established Lake Truck Lines in Houston, hauling fertilizer for one of the largest fertilizer companies in the world, as well as serving the local rice farmers. The elder Cain retired in 1977 and sold all of the company’s assets, except for the operating authority and corporate shell. Douglas Cain thought he could take a shot at running the company, so with “one junk truck” of his own he started it again in fall 1983.

“All of my father’s clients were gone, so I had to start from scratch,” he says. “In December 1983, the oil price dropped significantly and that started the Depression-like era in Texas, which was horrific. It took 18 months for me to get my first client; I loaded and unloaded trailers from 5 p.m. to 10 p.m. every evening and made calls during the day. I still say that my greatest accomplishment was making it through the ’80s.”

The oil market started to come back in the 1990s, which is when Lake Truck Lines began working for the oilfield services companies. Its trucking business was hauling barite for the market’s largest drilling mud company and it continues to work for that client today.

Making Changes
Serving the oilfield market in Texas, New Mexico and Oklahoma, Lake Truck Lines understands its business is to take care of its clients’ businesses. The company transports bulk, pallet or liquid with a fleet of single, double and triple pod tanks; vacuum trailers; flat beds and drop decks with forklift capabilities. It has multiple terminals and more than 100 drivers, but it took the company a while to get where it is today.

“I was not an astute businessman in my early life – I did not have the right mindset for what a company was,” Cain explains. “As a result, I did not grow the company much in the first 20 years that I ran it.”

“I needed a personal change, too – after 56 years in one town, anyone has skeletons,” Cain says. “In June 2011, I closed on a property in San Antonio and since then we’ve gone from 12 trucks to 75, and I expect that we’ll have 100 trucks by this summer. We’ve grown by 300 percent in the past 18 months and I believe we’ll double our size by next year.”

He stresses that “if you can’t be successful in the Texas oil business, you’re not trying too hard,” but adds that he has not been the sole reason for the company’s success. Lake Truck Lines’ staff has helped the company successfully manage its growth and prepare it for growth going forward.

“I worked alone for 27 years, but that wasn’t really our successful time,” Cain says. “Last December I hired a COO, Bruce Booker, who has worked for me for the past six years and now manages the day-to-day business.

“This allows me to focus on the big picture of the corporation and all of our employees,” he continues. “A few months ago I also hired a management consulting firm, because once you reach a certain size, you cap your skill set. They have really helped us make great strides.”

Effective communication
The success of Lake Truck Lines is important to Cain, he explains, because he wants this to be “the last job my employees will ever have.” Lake Truck Lines employs about 70 drivers and 15 office staff, and each one of them plays a vital role in the company, Cain stresses. In three years, his goal is for Lake Truck Lines to have an employee stock ownership plan in place.

“I wouldn’t know what to do with a sack full of money, so I’m putting money back into the company and turning the employees into owners,” he says. “We have made a lot of improvements, and I know this company is strong enough to keep going.

“We used to make mistakes over and over, but we’re making fewer mistakes now and we’re not dropping the ball. By not making mistakes twice, the staff is freed up to do their jobs and everyone knows their responsibilities.”

He notes the management consultant team has been helping Lake Truck Lines improve in a number of ways, one of which is how it holds meetings. By establishing “simple and regular” meetings with his team – five minutes every morning and 30 minutes every Friday – Cain has found the communication to be much more effective.

“We talk about what happened yesterday, what is going on today and the roadblocks we’re facing,” he explains. “It is effective, useful and real information is exchanged.”

Enhanced Services
Part of the company’s strength is due to the fact that it is diversifying its operations and enhancing its services. In summer 2011, Lake Truck Lines was having difficulty in obtaining more trailers, Cain explains, when he met some officials from Gallegos, one of the largest trailer manufacturers in Mexico. Cain started thinking about all of the equipment shortages in the oil and gas industry, and saw an opportunity for Lake Truck Lines to expand its offering.

“We brought some engineers from Gallegos to Texas and started looking a different pieces of equipment,” he says. “With their help, we developed a line of oilfield equipment specific to the markets we serve. Now we’ve built custom equipment for many of our clients.”

This entity, known as Lake Oilfield Services, is growing quickly and not simply renting equipment. Lake Truck Lines has 10 acres of property in San Antonio, and the front half is dedicated to Lake Truck Lines, while the back is for Lake Oilfield Services. In the back, the company is building a warehouse for a client, allowing it to be a distributor for the client in the Eagle Ford Shale.

The company also has acquired 10 acres in Odessa, Texas, where it plans to have the same setup. Cain explains the company is providing storage tanks, all the necessary transport and rig-up services on site. It requires no start-up costs from clients other than providing a couple of employees – the company wants it to be easy for clients to expand their business.

“With Lake Oilfield Services, we are providing services to clients that they don’t have,” he says. “By offering equipment rental and transport, we save money for clients and show them more value-added services. Now we have the ability to do multiple things for our clients – we’re not just a trucking company and we’re not just equipment, we provide a complete solution and a 24/7 service that this industry requires. We’re fully leveraging our assets to give our clients the highest level of service at the lowest possible cost.”

He notes that the company isn’t charging its clients for the warehousing.

“That allows clients to have the greatest opportunity to get into operating mode very quickly in the Eagle Ford Shale,” he says. “It also allows them to grow significantly faster without having to make a major investment.”

‘Extraordinarily Devoted’
Lake Truck Lines, with the help of Lake Oilfield Services, is seeing the most significant period of growth in its history, and Cain wants each division to be profitable and to stand on its own before the operation expands much more. He notes that the company will expand the line of equipment it’s making, but he doesn’t want to lose focus of the core business.

“I want us to do everything perfectly; that allows us to do the best job for our clients, employees and maximize our assets,” he says. He stresses that his “Damascus Road incident” was when he realized that ensuring this company would prosper was key for the sake of his employees. This is the philosophy that drives him forward.

“I am just a steward of Lake Truck Lines – I am responsible for administering this company so it’s there for our employees,” he says. “I am more determined than ever to make this a shining beacon of how a small business should be run in this country, and I’m doing it for our employees.”