Since its formation from Lauritzen Tankers in 2008, Lauritzen Offshore Services has played a role in supporting the rapidly growing offshore oil exploration and production sector.

The company remains a subsidiary of J. Lauritzen, a leader in ocean transport systems since 1884, alongside a number of other specialist operators; Lauritzen Bulkers for dry bulk cargo transport, Lauritzen Kosan providing transport of liquefied gases, and Lauritzen Tankers, which transports oil products and chemicals.

Lauritzen Offshore began life with a single vessel, the Dan Eagle, and a focus on shuttle tankers that could act as a ‘floating pipeline’ between the offshore fixed and floating structures and the shore. This has a number of competitive advantages compared to deepwater pipelines such as the ability to be easily redeployed between fields according to production planning schedules, easy to maintain and repair and economically attractive. The vessels are also not restricted by water depth, distance from shore or seabed conditions, making them a perfect partner to deepwater exploration and production.

Since this time, the company has amassed a fleet of three advanced dynamically positioned (DP) vessels – the Dan Eagle, the Dan Cisne, and the Dan Sabiá. Each ship incorporates the latest station-keeping technology for deep and ultra-deep water production facilities, in order to ensure safe handling of crude oil from production well to onshore refinery.

The culmination of an investment programme targeted at the Brazilian market, Lauritzen Offshore took delivery of the purpose-built Dan Cisne in September 2011, followed by its sister vessel the Dan Sabiá in January 2012. Both vessels have immediately entered into a 12-year charter with Petrobras operating in Brazilian waters alongside the Dan Eagle, which has its own long-term contract with the operator.

In its more recent history though, Lauritzen Offshore has shifted its focus somewhat to the niche accommodation and support sector, where there is significant demand, particularly during the installation, maintenance and inspection, and decommissioning of offshore facilities. Likewise, in comparison to ferrying personnel between the shore and the platform by boat or helicopter, an accommodation support vessel (ASV) offers significant financial incentives, and is less affected by adverse weather. These types of vessels are also suited to the trend towards deeper waters and more remote production where the shuttling of personnel is impractical. 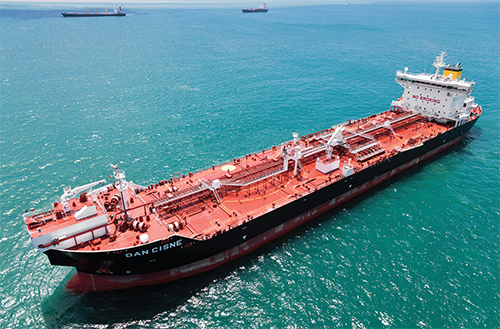 Within this sector Lauritzen Offshore currently operates the DP2 Dan Swift, which was runner up in the ‘Ship of the Year’ award at the 2010 Lloyds List Shipping Awards, but intends to grow its capability further through a new joint venture.

In July 2012 Lauritzen formed a 50/50 joint venture with private equity investors HitecVision of Norway, with a focus on delivering high-end semisubmersible ASVs

“Our current vessel, the Dan Swift, has been very successful in both Brazil and West Africa, but we have chosen to move towards a semisubmersible construction as we see this as being more suited to the harsher environments of the oil and gas industry. Likewise, in Norway and the UK where our new venture is focused, there is considerably more uptime attainable through using a semisubmersible platform compared to a ship-based vessel like the Dan Swift.”

At present, Lauritzen Offshore is close to signing a contract with a shipyard for this vessel, which is a newbuild semisubmersible based upon a concept that has been used for drilling rigs and well intervention rigs, but is now fitted with accommodation. The vessel is expected to be seaborne by 2015, where it will have similar applications to the existing Dan Swift in providing support to offshore oil platforms on their maintenance, commissioning, repair and inspection activities.

“The new semisubmersible vessel will offer a high standard of accommodation for almost 500 people, in comparison to the 291 currently catered for by the Dan Swift. It will also boast a large working deck and cranes for clients to utilise in their individual requirements. However, whilst most accommodation rigs are designed with a DP2 system, our newbuild semisubmersible will be fitted with a DP3 system. This has stemmed from a previous requirement in the industry, which has now become more or less the standard for the future of drilling and accommodation rigs,” reveals Erik.

The strong demand for accommodation support in the offshore sector, coupled with a limited supply, means that Lauritzen Offshore sees itself in a favourable position moving forward. However, Erik warns that success in the sector could be the source of its downfall: “With such a large volume of shipyards across the world, there is the ability to build new vessels too quickly, which can flood and ultimately destroy the market by overtaking demand for such services. However, whilst ourselves, and our major competitors, are all investing in new vessels this is a special niche in the market and therefore has a high barrier to entry. With the need for accommodation support growing off the back of the decommissioning of platforms, and work to repair and life extend assets, we see the market as looking stable for the next few years.”

With this in mind, Lauritzen Offshore will be watching the development and launch of its new semisubmersible ASV closely in order to determine its scope for replication in the future. “We have made some enquiries to the oil companies on what the vessel should include and how it should operate, so once it enters the market we see it as being suitable for many of the major and state oil companies. On the basis of this success we hope to be able to invest in further semisubmersible accommodation vessels as part of the long-term direction of the business,” concludes Erik.