After operating for four years as part of the Denmark-based J Lauritzen shipping group, Lauritzen Offshore Services was formally established as a wholly owned subsidiary in 2008.

It specialises in dynamic position (DP) vessels, which it provides for the offshore oil and gas industry in both its home market and abroad. These include shuttle tankers, accommodation vessels and service vessels, and all are designed to meet the requirements needed to operate and support oil production activities within deepwater fields. 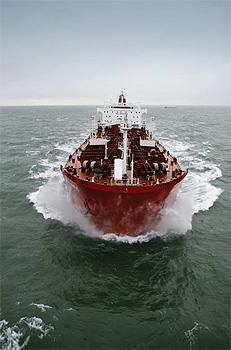 Whilst Lauritzen Offshore Services is only a relatively young company, it benefits from the vast experience and technical expertise of its mother company. The J Lauritzen group has been operating in the ocean transport solutions sector for more than 125 years, and its activities today are split across multiple divisions. In addition to Lauritzen Offshore Services, these are: Lauritzen Bulkers, which focuses on dry bulk cargo vessels; Lauritzen Tankers, specialising in oil and chemical tankers; and Lauritzen Kosan, which provides liquefied gas carriers.

Despite such strong group support, Lauritzen Offshore Services is fast becoming a prominent force in the offshore sector off its own merits too. This has been made possible largely through its ability to continually innovate – one notable example being within its monohull DP offshore accommodation solutions. Its pioneering endeavours into this sector include the Dan Swift, an accommodation and support DP vessel that was originally constructed as a Roll-on/roll-off (RORO) ship before being converted at the Blohm and Voss shipyard in Hamburg, Germany.

The Dan Swift is a sophisticated offshore unit, outfitted to a high standard with 291 berths and designed to work adjacent to fixed structures, platforms and floating units such as FPSOs and semi-submersibles. Detailed testing was conducted at the acclaimed Marin Institute in Holland and motion illness ratio (MAR) was measured and analysed to help provide maximum comfort for its passengers at sea. The Dan Swift has also been fully tank tested to determine its ability to maintain position and ensure that it is suitable for personnel transfer in a variety of environments.

The vessel is outfitted to provide a range of duties in addition to accommodation, including hook-up, commissioning and start-up support, maintenance support, light construction work and crane operations. As a DP-2 class vessel, the Dan Swift is also equipped with telescopic gangways on both the port and starboard sides, as well as a 100-metre knuckle-boom crane with active heave compensation.

Eric Møller, sales and technical director of Lauritzen Offshore Services, elaborates on the make-up of the company’s fleet: “We have numerous converted DP vessels at our disposal – one of which is now being used in a key contract with Statoil in Brazil. In addition, we have invested in two new DP shuttle tankers that will be taken on by Petrolpus in a five-year charter contract. We also have a 12-year contract for two additional shuttle tankers for Petroplus and we are always looking to expand our fleet further.”

One such vessel in the company’s shuttle tanker fleet is the Dan Eagle, a DP-2 model that was converted from the M/S Freja Pacific product tanker at Remontowa shipyard in Poland. This vessel is equipped with modern bow-loading system and it is designed to offload crude oil from platforms and floating units before shuttling it safely to onshore terminals. Lauritzen Offshore Services also has two new shuttle tankers under construction at the Cosco Nantong shipyard in China, to be delivered in 2011.

Eric explains how the company has been able to continually expand upon this global presence: “In addition to the skills of our personnel, we also benefit from the support of our mother company in both financial resources and technical support. The J Lauritzen group is known worldwide for its aptitude in providing bulkers and tankers, and so we already had a strong reputation to progress from. Our aim is to maintain this high standard throughout our own operations too by providing equally high quality vessels.”

Much of this reputation has stemmed from the success of Lauritzen Bulkers, which possesses a fleet of just under 100 vessels. Through its years of operations, this division has provided vessels 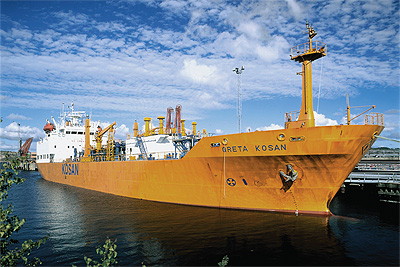 that have transported a wide variety of cargoes, ranging from iron ore to China or grain and timber for North America. With its headquarters in Copenhagen and offices in both Singapore and the US, Lauritzen Bulkers provides grab-fitted Handyzise and Handymax bulk carriers, as well as Panamax and Capesize vessels. All ships possess both self-loading and discharging capabilities, making them able to deliver to ports that are still under development.

Like Lauritzen Offshore Services, Lauritzen Tankers is another relatively young division within the group, having been established in 2004. Despite this, the division has still managed to develop a strong, global client base, through providing safe and cost efficient ocean transport for vegetable oils, crude oil, petroleum products and chemicals. It services a variety of major oil companies and oil traders through its fleet of modern, double-hulled, medium range tankers – all of which comply with both national and international requirements.

The final subsidiary of the J Lauritzen group is Lauritzen Kosan, which provides liquefied gas carriers for petrochemical gases, energy gases and ammonia. With an emphasis placed upon both reliability and safety, this division’s fleet consists of some of the most technologically advanced and environmentally friendly vessels. Its customers are in the energy, petrochemical and agricultural markets around the world and it has a dominant market position in both continental Europe and the Mediterranean. In 2006, Lauritzen Kosan also opened an office in Shanghai, China, which has enabled it to gain further exposure in the growing Far East market – an area where it has served many of the oil and gas majors.

With such a strong market position held by both the J Lauritzen group and individually by the Lauritzen Offshore Services division, Eric believes that the company has played on its strengths to endure the crisis. He highlights: “The shipping industry has naturally been affected, but we are so diverse as a group that it has not hit us very hard. Lauritzen Offshore Services has been even less affected than the rest of the group, because our sector is less sensitive to the economy than tankers or bulkers might be, due to changes in import costs and quantities. The offshore services industry that we cover, on the other hand, is very long term – if oil prices go down for instance, you don’t suddenly stop your investment. Companies that have found a large oil field in Brazil are not going to cancel the project due to decreasing oil prices, because they know these are only short-term fluctuations. Planned projects may be placed on hold, but any ongoing ones will continue, whether there is a crisis or not – and that’s where our business lies.”

One of the more pressing challenges faced by Lauritzen Offshore Services is in fact related to manpower and shortages of able staff, as Eric discusses: “One common issue for all operators of specialised vessels is the availability of skilled personnel. It is becoming increasingly difficult to source the right people and it takes up to four years to educate somebody up to the required level for a DP officer, and then there is considerable training on-board the vessel for any oncoming crew members. Additionally, other companies can compete by providing more attractive pay packages and so it is a constant challenge to find and retain the best people for the jobs. This is something we are always looking to improve, and fortunately the values and reputation that we possess as a company is in itself an attractive prospect to any job seeker.”

With this in mind, the future appears positive for Lauritzen Offshore Services, as Eric concludes: “Our aims are to continue increasing our offshore shuttle tanker fleet over the years to come, and to build the same sort of reputation for ourselves that our mother company has been able to acquire over the years.”