If 2017 was a year of planning and preparation for its involvement in major projects in the oil and gas industry, then 2018 is a year of activity,with Ledwood Mechanical Engineering already in full swing, demonstrating its broad capabilities across a number of ventures. The engineering company, specialising in an impressive array of services, from design, procurement, and fabrication, all the way to installation and project management of complex plants, is taking part in one of the most significant projects happening in Europe at the moment – the shutdown of a refinery in Antwerp, Belgium. “We have been involved in the process since October 2017, and the shutdown is scheduled to be completed in June this year,” Ledwood’s Managing Director, Nick Revell says. “It is the first time we are working on this site, and we regard this as a huge opportunity for us, so we have deployed 70 or 80 of our best people there. More shutdowns are planned in the near future, which means that we want to perform well and the project to be successful, in order to find ourselves in a good position to get involved in other programmes of this kind.”

In the meantime, the Welsh company landed another significant project. It won an Engineering, Procurement, and Construction (EPC) contract for an international company, operating a refinery in the UK. “The project aims to upgrade the refinery’s fluid catalytic cracking unit. This year, we will do some of the engineering and procurement for them, with the subsequent turnaround events scheduled for the second quarter of 2019. When we are done with the procurement, we will manufacture our items, protective coat them, take them onsite, disassemble the existing units, and 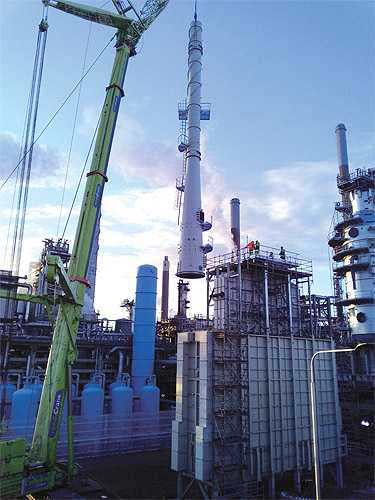 install the newly-manufactured components. Around 40 people will be engaged in the manufacturing process, but come the preshutdown and shutdown phases, we are planning to deploy nearly 80 people onsite,” Nick reports.

Two highlight projects in 2017 for Ledwood’s manufacturing division included the building of a large heater that was shipped to Sweden, and the fabrication and assembly of a prototype system for Marine Power System, which has already entered its trial period, and is presently being tested in seagoing conditions. The big aspiration for the company in the area, however, remains its anticipated involvement in the £1 billion Swansea Bay tidal lagoon barrage project, where Ledwood will manufacture large components for new turbines. Nick sheds some light on the programme’s current state: “We are waiting for an approval from the UK Government. Over a year ago, a report was commissioned to Rt. Hon Charles Hendry, to assess the economic viability of the tidal industry in the area. The outcome was very positive, and it was confirmed that it is commercially justified to proceed with the project’s implementation. As it stands now, potential supply chain members are being lined up, as we expect to be granted permission to begin work sometime this year.”

Significant project
At the moment, Ledwood’s manufacturing department is fabricating a new jetty that will accommodate an aviation-fuel import facility on the South East coast of England. “It is a modular system comprising about a dozen modules, which we will fabricate in our workshops in Pembroke. Once dismantled, we will be ready to ship the modules by road to our customer’s facility. It is a multimillion pound project for us, in which we are responsible for all the procurement of the raw materials, the fabrication, and the protective coatings of the modules. We started working on the project in the second half of 2017, and we are looking to complete it by June this year,” Nick explains.

Improving connectivity
Recently, Ledwood seems to have also taken a renewed interest in waste-to-energy projects, given the fact that the company started a new venture in the discipline in 2017, the first in several years. Nick discusses the prospects he sees for the business in the field of energy recovery “The environmental impact issues are becoming less onerous, thanks to the arrival of new technology that makes converting waste to energy easier. The UK has had problems getting rid of waste, but I think that more companies will turn to these more economic ways of waste disposal,” he reasons. “Together with the project we are working on at the moment, we did some work on waste-to-energy plants in Bristol, and we are bidding for three more projects of considerable proportions. The challenge that we face, however, is that the EPC contractors for these projects are not based in the UK. Some of them are in Europe, and others – as far as the Far East, which constrains us a little bit. We would very much prefer working with Tier 1 contractors, we have already worked with in the past, and have established strong partnerships with. Now we need to put more effort into improving our connectivity with overseas Tier 1 contractors, who we have not dealt with previously,” Nick comments.

While he opines that the energy sector will continue to present strong opportunities in the future, Nick remains wary of the effect Brexit might have on the industry, as a whole. “First of all, I think that some time will pass before we feel the impact of Brexit. A lot depends on how the immigration laws pan out. If immigration is tightened up, it is possible that UK-based companies are given the chance to increase their market share, as overseas companies will, more or less, be prevented from operating in the UK. Consequently, UK businesses’ operations will be restricted in Europe, as I believe it will be a reciprocal deal between Britain and the EU. We should closely monitor the skill sets that will be available to us in the wake of Brexit, too. To me, it is questionable whether we will have all the skill sets in the format we need them,” he sums up.