Back to Profile Gallery > Leni Gas and Oil

Any market niche presents a potential business opportunity – something Leni Gas and Oil (LGO) was specifically established to take advantage of in 2007.

The company saw ongoing potential in the redevelopment of proven onshore reserves, which require further investment or technology to recover more of the resources. As such LGO brings together a management team with a wide range of technical and corporate skills with a track record of successfully developing oil and gas assets. Neil Ritson, CEO, sees clear benefits to this strategy: “We are one of only a small number of London based companies that looks exclusively at field redevelopment of proven reserves. Playing in a niche market gives us the advantage of reduced competition compared to those that are, for example, solely chasing conventional exploration opportunities.”

For its first few years of operations LGO focused on it’s 100 per cent owned Ayoluengo Oilfield in Spain and assets in the Gulf of Mexico. However recently, while continuing to focus on the development of Spain, it has expanded rapidly in Trinidad where it has identified many oilfields that Ritson sees as perfectly fitting its strategy. “Although it has taken time to understand how to best exploit these opportunities, 2012 will see a step change in the company’s growth potential as we start to really take advantage of the assets we have acquired in the region,” explains Ritson.

In addition to exploiting the proven reserves in both Spain and Trinidad, LGO has also identified exploration opportunities in both areas, adding further potential upside to the portfolio. “Strictly speaking we don’t acquire areas for their exploration potential; rather we look for projects with additional oil recovery potential first, however if we can identify further deeperexploration potential as well then that is a strong positive factor in encouraging us to invest.” Ritson describes the other criteria that makes an asset attractive to LGO: “A favourable cost structure is important to us, as is the presence of existing infrastructure, a local market for oil or gas, and a stable political and fiscal landscape.”

He went on to explain: “To leverage our capital to the best advantage we have selected onshore projects where drilling and facilities costs are lower and work can be undertaken progressively without major capital requirements for facilities and infrastructure. In Spain for example we have upwards of 50 wells and the production facilities built by the original field owners in the 1970s and 1980s. Similarly, in Trinidad all the initial well and production facilities are in place and we can use our know-how and capital to enhance what is already there.” 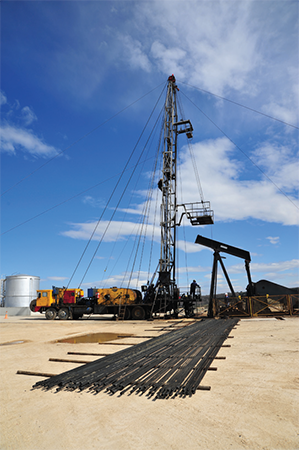 In terms of LGO’s latest plans for continuing to progress these assets, the company foresees 2012 to be a significant year of growth. Within Trinidad LGO intends to commence a well workover programme and to drill new wells in both the Moruga North and Goudron blocks including at least one exploration well in Moruga as early as spring 2012. The recompletion of existing producing wells is expected to significantly increase production in Trinidad over the coming year.

Next year also appears to be one of note for LGO’s Spanish assets, with the company planning to commence an enhanced oil recovery (EOR) project at the Ayoluengo field. Ritson describes the thinking behind this programme and the preparatory work completed so far: “In 2011 we undertook a major well overhaul in Spain with Schlumberger and Société de Maintenance Pétroliére, which has enabled us to increase production by over 100 per cent. This work demonstrated the potential impact an EOR project could have on production. We are currently preparing a dataroom and looking for a partner to work with us on the EOR project commencing in 2012.

“There are several companies already interested, but we want to ensure that we open up the project to the wider market. There are very few EOR projects in Europe yet, so we know it will attract quite a bit of interest. Being a relatively young company, we would like to find a partner that can bring a proven track record in EOR projects to the fore,” he adds.

By bringing in partners to share the capital costs in this way, LGO is helping to guard against the more difficult circumstances of today’s financial climate. This is another reason why the business is focused on creating value through operational success of its existing assets at present, rather than by more acquisitions. “Our strategy is to continue to focus on projects with proven oil reserves where we can economically extract further production and sell into the higher commodity price world that is now available. Our main short-term objective is to become capitally self-sufficient with the production revenues from each region supporting the ongoing development of those fields, in order that we can direct our attention and new capital to the upside opportunities in exploration, and perhaps selectively acquiring new projects,” describes Ritson.

He also sheds some light on the more long-term ambitions of LGO: “We have set ourselves the significant goal of increasing production from our current base of about 300-400 barrels of oil per day (bopd) to 5000 bopd in the medium term.”

Ritson concludes by explaining how these ambitious targets will be achieved: “Firstly, we need to increase the performance of our existing assets, and then to pursue the growth opportunities we have. When we complete the transactions announced in 2011 in Trinidad and commence the Spanish EOR project we will have the necessary base assets needed to achieve this production goal.”