Based in Buckinghamshire, UK, Litre Meter Ltd has developed a leading reputation in the field of flow measurement and has built a well-established name as a quality brand in the design, manufacture and supply of flow meters of all kinds.

The company was established in 1975 and will celebrate its 40th anniversary during June 2015, marking an important milestone for Litre Meter that is made all the more impressive considering that its pioneering designs introduced four decades ago are still in use today – although in greatly evolved and enhanced variants.

During the 1970s the company pioneered the development of the Pelton Wheel Flowmeter, an accurate, effective and versatile design suitable for many different fluids including acids, chemicals, fuels water and hot fats at both high and low flow rates. Later, in 1986 Litre Meter introduced the Viscous Fluids Flowmeter (VFF) for low and high-pressure applications and the product has continued to develop through to the present day. “The products that we developed during the 1970s and 1980s are the products that we are still making today, which is rather remarkable,” elaborates engineering director, Charles Wemyss. “However the technology involved in them as well as how they work has changed, and the market in which they are used has changed too. Coming forward to today, 70 per cent of our business comes from the oil and gas industry, while ten years ago it was 25 per cent. Meaning it has grown significantly and this is the reason we are so successful at the moment.”

Although demand has declined in recent years, Litre Meter continues to provide its Pelton wheel design, today however it is its VFF design that acts as the company’s flagship product and range’s design has continued to evolve to meet the requirements of its clients. As such, product development is at the forefront of the service offering that Litre Meter delivers. “Research 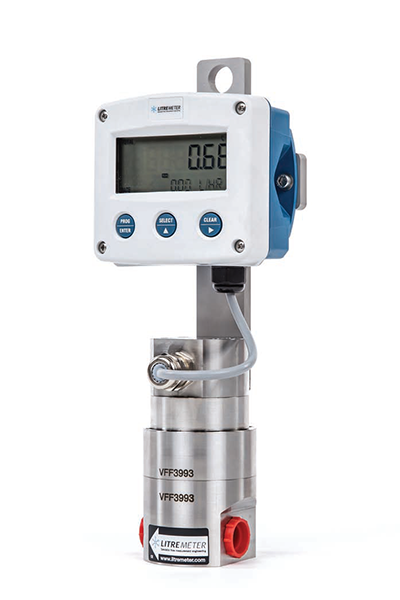 and development is a massive consideration for us,” Charles confirms. “We do training on our products fairly regularly through presentations and so on and possible improvements come up through those. This has been at an accelerated rate; currently there are three people in the engineering department while ten years ago we only had one. We invest a lot on research and development and we have a simple metric that in three years time 25 per cent of our sales will be due to development carried out this year.”

Furthermore, Litre Meter provides an everevolving range of instrumentation in support of its flow meters. Indeed all of the flow meters provided by the company include a pulse output and most are coupled with instruments to tailor these outputs to meet specific customer requirements. A new development in this area is the new Flowpod display instrument that was launched on 1st January 2015 as a replacement for the existing FPod display. The FPod was originally designed and introduced in 2005 to provide a solution that would enable Litre Meter to sell into the US and other markets using Exd, which is a US standard and has since proven to be a major driver in increasing the company’s sales. However, following several years of operation and customer feedback several areas were identified that Litre Meter felt could be addressed to provide an even more effective solution. “One of the comments that we got about the FPod was that it was bulky, physically it is a six and a half inch enclosure and when you look at the unit it is substantial. The second area was that there was a blue cable coming from the FPod to the flow meter and again this was picked up on by clients. The third point was the ability to programme the electronics, which can be done with the FPod but it is a clunky process using a special cable and a special programme,” Charles says.

“The Flowpod is designed to address these concerns and is encased in an enclosure that is around three inches, making it much smaller than the previous model. The design also does away with the blue cable and there are a number of ways you can programme it, using digital communications HART protocol version 7 and you can also use a magnet on the outside of the unit, which is again rather clunky but can be useful in an emergency,” he continues. “It is also possible to open up the housing and remove an internal micro SD card and put it into a laptop for programming. Additionally we will also use the SD card as a data logger, which is a relatively simple tool that will allow us to monitor how the unit has performed and how stressed it has been. This will allow us to further understand the way units are being used to make them even more efficient.”

Presently Litre Meter remains a global player with a unique solution that can be applied within a number of industry sectors. During 2009 the company began a journey to reach a target of £5 million in turnover by 2014. Having reached that goal the company is set to target similar growth for 2019 and with a strong global base and continuing research into new products, the indicators are looking good.