“Loops Automation is an engineering company specialising in system integration for control systems and custody transfer flow metering skids for the upstream sector of the oil and gas industry,” explains Hachem Kaddoura, sales director of the company.

“Since 2000 Loops Automation has been working in Iraq where it has played an integral part in many projects that have been proficiently executed for end users, international developers and EPC contractors.”

Between the year 2000 and 2003, the company built up a solid reputation for executing numerous control and instrumentation projects directly alongside Iraqi oil and gas companies and refineries as a part of the United Nations Oil for Food Programme. During the four years between 2005 and 2009, Loops Automation established itself as a strong, reliable partner of the Coalition Provisional Authority, undertaking work on its behalf. At this time the company also worked with a host of international contractors and developers on notable projects including West Qurna, Majnoon, Zubair and Rumailah. Today the business continues to partner all the major international players in the region and local end users.

“While the biggest market for the company remains Iraq, it has managed to establish a foothold in other countries including the UAE, Saudi Arabia, Oman, Sudan, North Africa and Egypt,” Hachem says, before going on to highlight a number of the key strengths that have helped Loops Automation achieve all it has in little more than a decade: “Having a strong presence in its home market of Iraq, a good network of contacts throughout the Middle East as a whole and a large degree of knowledge and experience has made Loops Automation the strong force it is. However these are just a few of the qualities the company has that distinguishes it from the competition.

“By employing a diverse and highly proficient team of professionals the business is able to deliver quality solutions that are developed and made under one roof. Further to this, Loops Automation has always endeavoured to establish long-term relationships with its customers where trust is cultivated by providing continuous, strong support and ensuring timely delivery of first-class solutions. Being able to solidify such relationships is something Loops Automation is extremely proud of. The company believes in giving top priority to its customer’s best interests and in doing so it tailors its services to meet each individual need and expectation. This is a company that goes out of its way to accommodate customer’s requirements, which is something that will always be the case.” 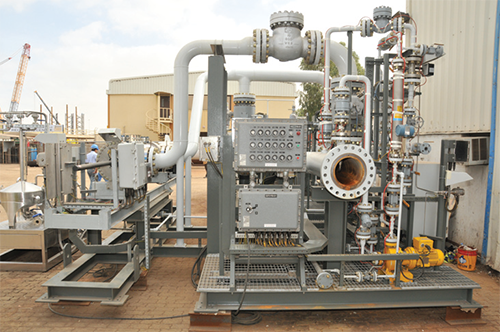 Working predominantly within the upstream oil and gas industry, both onshore and offshore, the company’s main activities can be divided into two main categories, control systems and custody transfer flow metering skids for both oil and gas. Among the control systems offered by Loops Automation, a client can select from a range that includes distributed control systems (DCS), emergency shut-down (ESD) and fire and gas systems, supervisory control and data acquisition (SCADA) as well as applications and programmable logic controllers (PLC). The company is also capable of offering services including field instrumentation, power station automation and power management support, pumping and distribution station controls, burner and boiler management systems and gas turbine controls.

Keeping in line with its desire to expand the reach of the business, the company is now into the final stages of relocating to new, bigger offices, a process expected to be concluded by the end of 2011: “The reason behind this move is the simple fact that the company’s current premises are insufficient to accommodate its workload and plans for the future. Loops Automation has spent the last several years increasing both the number of projects it undertakes and the countries in which these projects are carried out,” Hachem says. “Inevitably such growth means the company requires more resources, particularly in the form of skilled people, and as the volume of work continues to rise so too does the need to utilise greater floor space.”

Due to the nature of the oil and gas industry and the region in which the company operates, there are many challenges that Loops Automation has to face on a daily basis, most notable are the harsh environmental conditions, the safety and security of employees and goods, logistics and transportation issues and the sometime unstable political climate experienced in volatile regions such as Iraq, Libya and Yemen. Even in the face of this demanding backdrop, Loops Automation has established itself as a major player in the region and continues to take on more work as the market develops.

“There are several new projects that have been or are due to be announced shortly in Iraq and Saudi Arabia, while business in North Africa, particularly Egypt, is expected to pick up in due course as well. One of the company’s most recently acquired contracts in Iraq is for the refurbishment of a gas turbine control system, where it will be replacing the old application with a modern, updated system on a turnkey basis,” Hachem continues. “It is the hope of Loops Automation, and all the other companies working in the country, that things continue to move at a fast pace in Iraq, especially as international oil companies aim to reach their preannounced production goals that are currently behind schedule.

“In addition to expanding within its current areas of interest, Loops Automation will continue to look at increasing its manpower across the board. A tentative aim for the company is to one day explore other areas outside of the oil and gas sector, however its commitment to the industry and countries like Iraq will always remain intact.”