Established as a state-owned oil concern in 1991, Lukoil has since gone on to become the second largest private oil company in the world by proven hydrocarbon reserves.

With its activities split between oil and gas exploration and production, the production of petroleum product and petrochemicals, and the marketing of said outputs, the company is one of the world’s leading vertically integrated oil and gas businesses.

“The last 12 months have brought with them considerable challenges as, for the first time in its 20 year history, the company has experienced decreased oil production levels in the Russian Federation,” states Vladimir Semakov, media and press relations manager. “The reason for this decline is twofold. First it is due to the natural aging of its traditional oil deposits, particularly those in Western Siberia, but more importantly it is due to the lack of new oil and gas licenses being obtained in Russia. In response to these difficult conditions, Lukoil decided to approve a new strategy for the decade ahead. The goal of this strategy is to stabilise the business in 2012, before growing its oil and gas production capabilities, upgrading its downstream capacities, optimising its corporate management structure and improving its economics from 2013 onwards.”

What this strategy also does is further highlight Lukoil’s ability to diversify and adapt to market trends and changes: “Today the company operates in more than 40 countries around the world and has become expert in the production of oil, gas, petroleum products and petrochemicals, as well as the generation of heat and electric power,” Vladimir continues. “More recently it has entered into the green energy sector, a move that showcases the fact that Lukoil continues to follow a path best described by its motto of ‘from the oil well to the fueling station’.” 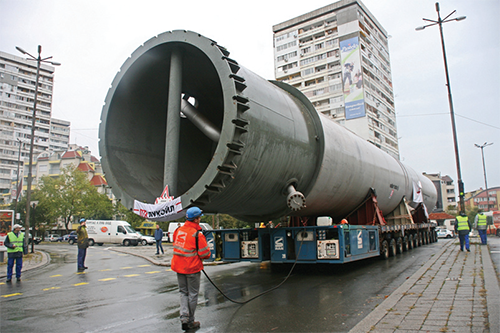 In October 1999, Lukoil acquired 58 per cent of the shares of the company Neftochim and with that brought into its portfolio the largest oil refinery on the Balkan Peninsula. Following more than 12 years of investment that has addressed the renovation and upgrading of production units and introduced a state-of-the-art management approach, Lukoil Neftochim Burgas is today a modern oil refining plant with a crude oil capacity of approximately 9.5 million tonnes per year.

“Across Europe at present the margin for refining is very low indeed, not much more than $5 per barrel in fact. In such conditions it comes as little surprise that many refineries have been transformed and adapted into oil terminals, or in some cases forced to close altogether. What the industry has seen in recent years is that those refineries that have survived are the ones with the best economic structure, backed up by high-tech enterprises, low sulfur products and reliable suppliers. The Burgas plant is one of these refineries and has benefitted greatly because of it,” Vladimir says.

In January 2012, it was formally announced by the company that a lump sum turnkey contract, worth more than 900 million euros, had been awarded to the Italian branch of Technip for the engineering, procurement and construction of Phase 1 of a heavy residue hydrocracking complex to be built at Lukoil Neftochim Burgas refinery. This contract follows the successful execution of the front-end engineering design that was completed by Technip in the first quarter of 2010, and the detailed engineering and procurement service contract won by the company at the beginning of 2011.

“Implementation of this project will allow the refinery to increase its output of Euro-5 diesel fuel by 1.2 million tonnes per year and also close down the production of high sulfur fuel oil,” Vladimir explains. “The key element of the new complex is a tar hydrocracker that will possess an annual capacity of 2.5 million tonnes. It will also involve the construction of an amine regeneration unit, a sour water stripper and hydrogen production units. Commissioning of the new complex is expected to be complete in January 2015.

“The distant future for the company involves expanding on the refinery’s petrochemical processes. In the short-to-medium term the focus is on the successful completion of its hydrocracking complex. The commissioning of this complex will place the Lukoil Neftochim Burgas refinery among the most technically sophisticated found anywhere in the world,” Vladimir concludes.