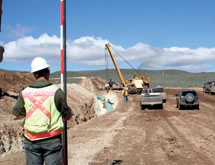 Providing service to the major energy sector companies for more than a decade, LW Survey Co.’s success is due to its experienced team of surveying and mapping professionals, as well as the use of cutting-edge methods and technologies. The company’s survey, mapping and data expertise allows LW Survey to provide unmatched service to its customers in the energy industry.

“Many survey companies are tied to an engineering company, but we focus on surveying and mapping,” says Gordon Brinker, president of LW Survey International. “We have 350 to 400 dedicated surveyors who don’t get drawn off of projects onto internal engineering projects, and we support multiple engineering companies.”

Becoming Local
Having started out as a surveying company that focused on the support of midstream pipeline projects, LW Survey today has a growing presence in the United States, Canada and Russia. It has worked on pipeline projects ranging from just a few miles in length to some projects that have been hundreds of miles long.

“We’ve been involved with projects that have stretched from southwest Wyoming to southern Oregon, from Montana to northern Colorado and from Oklahoma to Texas,” says Mark Miller, president of LW Survey U.S.

“The pipeline industry is where we made our name, and our focus on constant improvement is a big part of our success and our ongoing relationships with clients,” he adds.

“Producers generally want to use local vendors,” Miller says. “That is a challenge for us in areas where we have no local presence, and that is why we are transitioning to a more local philosophy in order to bring our expertise to bear in more locations.”

In addition, the company has assembled a strong leadership team that has a strong balance of technical expertise and experience along with complementary personalities and leadership styles. Overall, LW Survey’s leaders have well over 100 years of combined experience in the industry.

Expanding beyond the United States into markets like Canada and Russia is also an important part of the company’s effort to diversify and avoid being one-dimensional. LW Survey wants to be able to transfer resources to other markets when needed.

“Markets are different; in some places, pipelines are shutting down,” Brinker says. “In others, they are opening up. As a company, we have to look at all of the markets where we can logically do business. That is why we are expanding. We are also looking at additional markets like Australia, and we’re looking at different facets of surveying so we are not just solely focused on oil. Energy will always be our core competency, but we know that we need to expand our core competencies.”

“We will always have an ongoing effort to win as many midstream pipeline projects as possible, but we’re also looking at ways we can expand our work with the electrical transmission line business and department of transportation highway work,” Miller adds. “That kind of work will help us expand and diversify our portfolio.”

Staying Competitive
Expansion outside the United States is still relatively new for LW Survey. The company moved into Canada and began its joint venture in Russia in 2012. Because those undertakings are so fresh, LW Survey is investing significant time, money and resources into those opportunities to help get its international business running.

At the same time, LW Survey remains focused on the many opportunities that exist in the U.S. The Bakken play in North Dakota, the Eagle Ford Shale play in Texas and the Utica Shale play in Ohio are all seen as fertile ground by LW Survey. The company already has an office in Minot, N.D., and it is in the midst of building its presence in the San Antonio market. In addition, the company plans to establish an office in east Ohio in the near future.

Domestically and internationally, LW Survey must continue to demonstrate that it has the right personnel for all projects it undertakes. The company already has a sizeable work force in the United States, and it also employs more than 70 people in Canada. As LW Survey grows its presence internationally, ensuring that it has the right people in place will help the company stay on top of its game.

One side effect of the ongoing suffering within the general economy over the last few years has been an increase in competition for LW Survey. The energy sector hasn’t been hit quite as hard as many other markets, and LW Survey has always been an energy sector specialist. Surveying companies outside of the market recognized that energy presented a substantial opportunity, so there has been a natural migration of surveyors coming into the energy market as other markets contracted.

But LW Survey has withstood these challenges by maintaining a commitment to operating as a premier company that clients, ownership, management and employees can be proud of. LW Survey is confident that its current organizational structure – with one president overseeing U.S. operations and one president overseeing the international sphere – will help the company accomplish great things in the coming years.

“We honor all of our commitments, and we always stand behind our work,” Miller says. “We will continue to work hard to understand what the client wants so we can address what is important to them.”