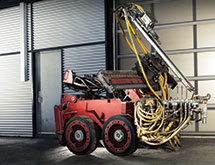 Since 1984, Machines Roger International has been known as a name that means quality in the mining sector. Whether it is working as a contractor on a job site or simply providing specialized equipment, Machines Roger International has proven that it has the products and services necessary to thrive in a highly competitive marketplace. Business Development Manager Roger Perron says the company demonstrated those attributes at the Canadian Institute of Mining, Metallurgy and Petroleum Convention in Vancouver in May, and it expects to continue building on its strengths for the foreseeable future.

Based in Val-d’Or, Quebec, Canada, Machines Roger International was founded by Roger Masse, a miner who was dedicated to finding methods to improve safety in mining. In 1984, he developed the V-30 boring head, which improved drilling methods for slot raise development, making their development more efficient and safer. The company continued as a manufacturer of specialized drill equipment until it added a contracting division to provide drilling services.

Today, Machines Roger International continues to serve two distinct customer bases through its manufacturing and contracting divisions. Even as it competes with some of the biggest names in the mining sector, Perron says the advantages Machines Roger International brings to the table have helped it celebrate more than 25 years of success so far, and the company has every reason to believe it can keep that winning streak going.

Tradition of Excellence
The company’s manufacturing division is built on the success of the V-30 boring head, which can be used in applications ranging from slot raises to drain holes and electrical cable holes. According to the company, the V-30 is capable of drilling successfully in many diverse situations, and under various conditions. Even though the company competes with numerous mid- and large-size manufacturers, Perron says the V-30’s unique features give Machines Roger International a strong edge.

“We do quite well because we have a pretty good reputation as far as the quality of our services is concerned,” he says.

The reputation of the V-30 was bolstered even further last year, when Machines Roger International signed a global distribution deal with manufacturer Sandvik Mining. “Through our association with Sandvik, we now have a global footprint,” Perron says.

Contracting Services
On the contracting side, Machines Roger International has become well-known for providing a wide range of production drilling services and specialized drilling services. The company’s capabilities allow it to drill between 1-3/4 inches up to 30 inches in diameter. According to the company, all work it performs is carried out by experienced professionals and supported by a dedicated technical and mechanical team for each project.

Perron says the company’s greatest strength on the contracting side is the specialized nature of its fleet, which gives it the capability to meet virtually any drilling requirement for underground mining. This equipment includes ITH drills, pneumatic drills, hydraulic/electric drills, all of which are designed, modified and repaired at Machines Roger International’s own facilities.

Remaining competitive can be difficult, especially during a period in which customers expect greater value for their money while raw materials costs are increasing. “The challenge is to be able to continue to offer quality services and doing it safely while controlling our costs,” Perron says. “What we try to do is control the costs of our materials through standardization.”

By standardizing as much of its fleet as possible, Perron explains, the company can keep equipment out of the shop and back on the job site faster and more efficiently. This is because Machines Roger International uses common parts for much of its equipment, rather than relying on specialized components for each piece of equipment.

Emerging Markets
Perron explains that the purpose of appearing at this year’s Canadian Institute of Mining, Metallurgy and Petroleum Convention was for Machines Roger International to continue building connections with new and existing clients. This strategy and these efforts have become especially important given the state of the mining sector.

“Everyone knows that the mining community throughout the world has gone through a pretty tough recession over the last several years,” he says.

Despite the rough state of the global economy, however, Perron says Machines Roger International sees signs that things are getting better. As more markets around the world begin to recover from the recession, the company sees its opportunities for growth expand.