Back to Profile Gallery > Magma Global

Founded in 2009, Magma Global was established by its current CEO Martin Jones to provide the world’s most reliable risers, jumpers and intervention lines for subsea exploration and production.

During 2010 the business received additional backing to accelerate its growth from Calgary-based KERN Energy Partners and Copenhagen-based NES Partners. BGF Plc and SICP LLP have since joined its investor group, providing Magma Global with additional capital to support the growth of the business and significant manufacturing capacity expansion. The company is based in Portsmouth, UK with further offices in the US, Angola and Saudi Arabia.

Magma Global manufactures the pioneering product m-pipe®, a unique high quality, high strength and low weight carbon and PEEK polymer pipe with a monolithic structure from bore to surface. “PEEK is produced by a company called Victrex, which is based in the North West of England and currently fabricates 80 per cent of the world’s PEEK,” explains Magma technical director Stephen Hatton. “Magma Global has a very close working relationship with Victrex in order to provide the company with enough PEEK to meet its future requirements. The beauty of m-pipe using carbon fibre and PEEK is that they are both very high performing materials, which results in a very high performing pipe. That is the fundamental principle behind Magma Global; to have a pipe that really out-performs other products on the market and which does so in a number of ways, whether it be through weight, strength, fatigue or chemical resistance.”

Although production using composites has existed for several decades it has not yet been widely adopted within the oil and gas market, which is something that Magma Global is confident is about to change. “I think it is fair to say that composites have been around for the last 20 years, however I wouldn’t say that they have been as commercially successful as they might have been to date. Composites have been proposed for all sorts of structures, pipes and general protective structures in the oil and gas industry, but it has never really made a significant 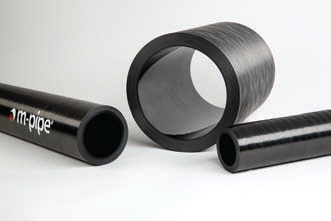 impact, as the industry has been traditionally focused on steel pipes and steel products,” Stephen elaborates.

“This has changed over the past five years or so with the introduction of new composite manufacturing methods. The problem in the past was that it was difficult to produce large volume composites at high quality. This presented a real challenge within the oil and gas industry, as well as the composite industry in general, but the process used by Magma Global solves that problem. Magma has a continuous computer controlled 3D printing process to make its m-pipe product, where we use a laser to melt very small qualities of material at a very high rate,” he adds. “This means that the process is very controllable, allowing Magma Global to have a strictly controlled and high level of quality.”

Presently Magma Global is focused on increasing its manufacturing capability to enable it to meet m-pipe demand globally for subsea risers, jumpers and intervention lines. “I would say intervention is probably the company’s most important immediate product line right now because in the current oil market we are seeing rapidly growing demand to improve production efficiency,” says Stephen. “The subsea market is currently struggling to carry out subsea intervention using coil tubing, which has problems with fatigue, corrosion and weight. More importantly, alternative intervention pipe products are usually permanently damaged by chemical attack from hydrogen fluoride and other similar aggressive intervention fluids.

m-pipe is a high performance product that enables deep water and high temperature intervention and also other more challenging subsea applications, such as risers, where existing solutions are failing to deliver to the levels of cost and investment return required. This presents a strong opportunity in the market for Magma Global, as the oil price is low and operators like the idea of going into existing wells and assets and increasing productivity rather putting their CAPEX into new field developments.”

Although m-pipe offers several advantages in terms of higher performance and subsequently reduced operating costs, Magma Global is aware of the challenges of bringing a new product to market. Indeed it accepts that there is inevitably some level of risk for clients when investing in a new technology. As such, Magma Global is currently undertaking qualification testing and maintaining close relationships with all the operators and the major subsea contractors that are active within the market.

Furthermore, to ensure that it is able to provide an effective product as well as the means to assist in deployment and operation, it has entered into an agreement with Maritime Developments Ltd to deliver an integrated product package as Stephen explains: “Magma is a pipe manufacturer, but we recognise that to get m-pipe used by the oil and gas industry, there are some quite important and sensitive relationships to establish. This includes major installation contractors and engineering contractors as well as end users, so we thought it was very important to ease the introduction of m-pipe by having a method of deploying it very safely and reliably. This enables us to develop both the pipe and the handling equipment so we can deploy it as an integrated package, because it is not sufficient for Magma Global just to have a pipe, we need to be able to advise and assist on how to deploy it correctly.”

With its high performance m-pipe product and close relationships with operators, oil majors and suppliers, Magma Global is on the cusp of introducing pipe solutions that will benefit clients throughout the subsea oil and gas industry. Indeed after several years of hard work, the future of composites and of Magma Global looks very bright indeed.