Operating since its foundation in 2009, Marine Assets Corporation (MAC Offshore) represents a pioneering supplier of modern and sophisticated vessels for clients within the offshore oil and gas industry. MAC Offshore is a founding developer of the compact semi-submersible concept and has since continued to develop, promote and deliver the technology to the oil and gas market from its base in the Jumeirah Lake Towers (JLT) free zone, Dubai. MAC Offshore was previously profiled by Energy, Oil & Gas magazine during August 2015, during which time CEO, Robin Reeves discussed the company’s contract to deliver the world’s first purpose built vessel for offshore mining for Nautilus Minerals Inc.

“Since 2015 we have continued to focus on our business plan of building offshore support vessels for the offshore oil, gas and renewable sector, with a view to anticipate what the sector will require in 24-36 months time while addressing industry requirements as opposed to minimum standards,” Robin reveals. “We currently have several vessels in the pipeline and we have slowed down the 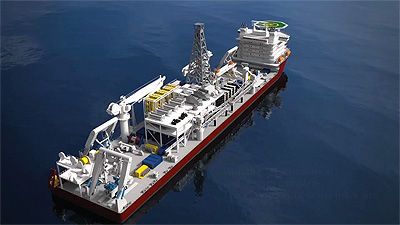 construction of these to deliver the vessels 6-12 months later, taking into account the present depressed state of the market. We are also focusing on specifically diversifying into new areas, which leads on to the mining vessel for Nautilus Minerals. This is something that is outside of our conventional oil and gas market and really represents an exciting new market for the company.”

The contract to deliver the unique mining vessel was signed during November 2014 and calls for the vessel to be constructed at the Fujian Mawei Shipbuilding – China’s oldest shipyard. Once completed the vessel will chartered to Nautilus Minerals over a five year term period with a further five one-year options. The involvement of MAC Offshore in the development of the vessel commenced with the company completing the final design of the ship prior to the beginning of construction. “A broker initially introduced us to the client, Nautilus Minerals that wanted to build a specific vessel to operate their subsea mining operations. They had a requirement in mind for the desired dimensions and sizes for example and had started the preliminary design of the vessel with Seatech in Singapore, however the design wasn’t actually finished,” Robin says.

“Our scope was to complete the design and gain class approval before finally building the ship and chartering it to the customer. Nautilus Minerals were focused on the mid-section of the vessel, which is where the company intended to store their mined ore as well as position their subsea mining equipment,” he adds. “They had started the development of that design and when we inherited the project we still had to finished the bow and the stern section, including the propulsion and engine room lay out.”

Construction of the vessel began in September 2015, with the ship is set to initially launch during March 2017. Sea trials are set to being in September 2017 prior to final delivery at the end of December 2017. The vessel is 227 metres in length and has a beam of 40 metres, it will have 32 Mw of installed power to support the vessel’s power management for DP positioning and supply 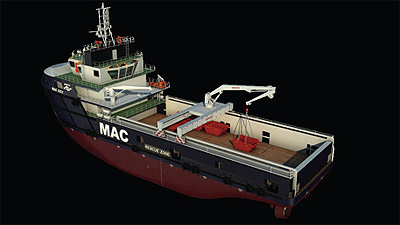 Further to the continued development of its mining vessel for Nautilus Minerals, MAC Offshore has also recently introduced a new Garbage Converter vessel, which provides a tangible solution to the problem of waste management in the offshore environment. “The recycling, removal and disposal of garbage is a significant issue within the offshore environment where there is limited space. Because it is waste, garbage tends to take last place in the queue in terms of deck space,” Robin explains. “We found a garbage converter machine that was designed by an Italian company and took that concept a stage further by working with them in collaboration to design a vessel on which to install the unit. This allows the vessel to proceed to offshore locations to collect and process garbage in a process that reduces the weight of the waste by 70 per cent and its volume by 30 per cent. The garbage is converted into a substance called RDF (Refuse Derived Fuel) which is essentially a sterile fluff.”

The garbage processing machine can handle waste ranging from tin cans, glass bottles and cardboard to food and plastics, while depending on the materials processed, the resulting RDF has a calorific value and can therefore be formed into logs and burned as fuel, or simply stored in landfill as sterile waste. “We have also produced a containerised unit that is basically an offshore container, meaning that it is certified for offshore use and can be positioned on an offshore platform or rig if the client does not want the expense of having a vessel operating in the field. We have similar units on trial with international oil companies in the UAE at present and the results there are looking very positive,” Robin adds.

“We also continue to develop our range of semi-submersible accommodation units and currently have two of these in operation, with one in Brazil and the other in Brunei. There are a further three units that are nearing completion, that have been destined for repeat orders for existing customers and we are also targeting a smaller version of this design for the wind farm market,” he concludes. “It is our forward vision that really differentiates us within the market and this has been our business plan since day one. This will continue to be the case through the delivery unique designs that can compete in terms of cost-effectiveness and out perform existing vessels.”