Back to Profile Gallery > Master Marine

Founded during 1997 Master Marine AS began life and operated as an engineering business up until 2007, when the company ordered two service jack-up rigs from the former Labroy yard (now PaxOcean) in Indonesia. However due to a number of external factors, the project to acquire two service jackups would undergo significant change that would lead to Master Marine taking its present position as a successful supplier of self-elevated platform solutions. “In 2008 the first unit was converted to an accommodation unit after securing a three year, plus further options, contract for ConocoPhillips for accommodation services at Ekofisk and Eldfisk field in the North Sea,” explains Managing Director, Thomas Gabestad. “Following delays at the Labroy yard after the financial crisis, the second unit was cancelled in spring of 2011. The accommodation unit ‘Haven’ was completed in Norway at Nymo yard in Eydehavn and commenced its operation on 28 July 2011. The rig has been operated with 100 per cent uptime during its charter which expires on 28 July 2015.” 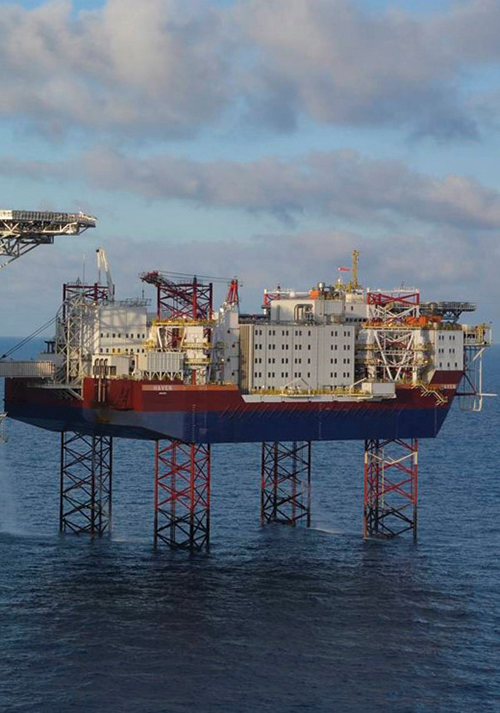 Haven is a four-legged self-elevating multipurpose unit built for the harsh North Sea environment to the highest safety specifications. It is currently outfitted as a top of the line offshore hotel, although its strong deck structure and oversized jacking system allows for possible re-configuration with large and heavy client modules replacing some hotel-capacity. Presently the unit is able to accommodate as many as 447 people across its 443 single cabins and additional two double cabins, all of which include shower and toilet facilities; telephone; TV/SVS and network connections. Further onboard facilities include 64 offices for clients; recreational rooms; hospital; gym; cinema and well-equipped galley and mess room. Operationally the unit is equipped with four 130-metre legs, helideck and crane, as well as the ability to provide various utilities such as water and electricity to connected platforms. The design of Haven incorporates a raised bow and offshore barge hull allows wide weather windows for simple mobilisation and rig move.

Since its completion in 2011, Haven has been in operation solely with the client ConocoPhillips. During this time the unit and its crew have performed admirably and even completed a technically challenging rig move without incident. “Haven has been in full operation for the client during the whole contract period without any lost time injuries, even through several harsh winter storms Haven has remained fully operational,” Thomas reveals. “This successful operation stems from a good co-operation with the client, a dedicated and skilful crew and a rig that has proven its technical capabilities. The rig move from Ekofisk to Eldfisk was well prepared both by the ConocoPhillips and ourselves. This resulted in a successful rig move, which was completed within planned timeframe and with no technical difficulties.” Haven successfually completed its relocation from Ekofisk to Eldfisk during June 2014, after 34 months of continuous operation. The rig was then jacked down, towed to its new location at nearby Eldfisk, positioned and jacked up again over the last few days without any incident.

The contract between ConocoPhillips and Master Marine is due to conclude during July 2015, following a highly successful first deployment for Haven. Although the present downturn in the oil market has created temporally challenging market conditions, Master Marine is confident that its proven track record and industry knowledge will enable the business to navigate into new contracts, as Thomas observes: “As exploration and production companies continue to cut back in investments and maintenance programmes in most regions, it will affect the opportunities in the short-term. The short-term market is challenging in Master Marine’s primary market, the North Sea, however we are marketing the unit in several other regions. Oil companies have cut back on investments and maintenance over the last 12-18 months, however history has proven that this will result in higher activity after a period, which will result in several possible opportunities in the accommodation market.”

Master Marine is dedicated to providing safe, efficient and comfortable accommodation services to all stakeholders and clients. As such it maintains a strict health and safety policy and takes every reasonable step to negate and eliminate hazards causing unwanted incidents and accidents. Furthermore the company complies with all applicable national and international rules and regulations with a management system that complies with the requirements of ISO 9001, ISO 14001 and OHSAS 18001. These values along with the company’s proven capabilities will prove vital for Master Marine as it enters into new relationships with clients old and new and continues to provide safe refuge and stability to personnel, even in the most demanding environments.