Back to Profile Gallery > MC Shipping

For more than 20 years MC Shipping has been a successful owner and operator of vessels in the commercial, and more recently, LPG sectors.

Today the business has a fleet of LPG carriers ranging from 3500 to 78,000 cbm, which are employed in a mixture of short- and long-term charter agreements with clients across the globe. All of these vessels are technically managed by some of the world’s leading marine services groups – Anglo-Eastern, and Wallem Shipmanagement.

“MC Shipping was founded in 1989,” says Mark Jewell, chief commercial officer at the business. “Essentially, it started its operations mainly in multi-purpose and container ships, and then in the late 1990s, around 1996/97, it purchased its first gas ships having recognised the gas sector as a growing market. Slowly as the years progressed, and business in the gas market continued to grow, the container ships were sold off and now, as of today, the company’s operations are based 100 per cent on liquefied petroleum gas (LPG). Up until 2007 the business was listed on the NY Exchange, but was then privatised, as it remains today.”

As the gas market continues to grow sectors such as shipping and transportation become increasingly competitive. Fortunately Mark believes that alongside the experience the company has in the sector there are other factors that distinguish it from it’s the rest of the market: “We’re slightly different to many of our competitors in a number of ways,” he explains.

“For example, we have a range of different types of ships within the LPG sector, ranging from small pressurised ships, mid-size vessels and large ships up to 78,000 cbm, whereas many companies concentrate on particular size or niche. What also sets us apart is the fact that we generally look at developing and maintaining long-term employment with our customers. I think this is important in the market, generally speaking we’re not big spot players, we would rather look at having successful long-term relationships.”

This approach has clearly paid off, with MC Shipping counting many of the world’s larger players in the gas sector as its clients. “Vitol is one of our biggest customers, and we have also ships working with an Algerian oil company. Other companies that we regularly work with include Shell, Mitsubishi, Bergesen worldwide E1 in Korea and PetroVietnam. Overall, our work is spread across Europe and Asia.” 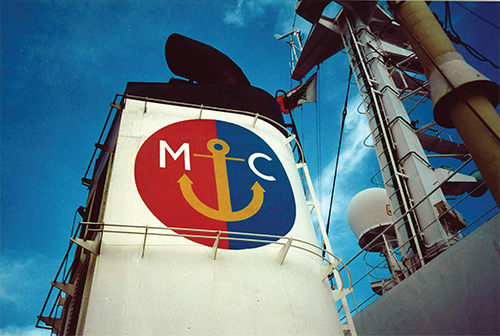 As mentioned, one of MC Shipping’s key strengths is its close co-operation with its customers, something that Mark is keen to highlight: “Our approach varies from customer to customer, but we always monitor the performance of each operation and try to visit our clients on a regular basis, wherever they are based. Also, by ensuring that we keep working to all of the relevant ISO standards and KPIs we can be sure of maintaining our high quality standards.”

As Mark mentioned, MC Shipping’s fleet encompasses a range of vessels suited to any number of gas operations. This has been built up through continuous investment in new ships, and by closely monitoring the international shipping market.

MC Shipping’s vessels are outsourced to third party ship managers, in this case Wallem Shipmanagement and Anglo-Eastern, which are in charge of operating them to the highest standards as well as providing crew and maintenance. Jim Nelson of Wallem Shipmanagement explains more about this relationship: “Wallem was established in 1971 and has now grown to manage more than 350 ships from six offices in Hong Kong, China, Norway and Germany. We offer a full range of services ranging from crew and technical management to procurement, safety and insurance. All of our systems and procedures are underpinned by internationally recognised and independently audited standards.

“Wallem has been managing vessels for MC Shipping since the beginning of 2006, and during that time we have increased the number of vessels managed from two to seven. Our relationship has been based on a mutual understand of each other’s business requirements, trust and total transparency in all our work. A good solid relationship between a shipowner and his ship manager is of vital importance for the smooth, efficient and economical operation of the ships at all times. Wallem and MC Shipping have exactly this relationship, and we hope it will continue for many years to come.”

In the future this relationship is likely to be further strengthened, particularly with MC Shipping’s plans to continue to invest in its fleet and add new vessels to its roster. At present the company is in the process of selling a number of its ships, but once this has finished then it will look at acquiring new tonnage depending upon market requirements and client needs.

With this in mind, Mark is confident about the future of the business: “The recession has hit everyone in the industry. We’ve been fairly lucky in certain respects as a lot of our ships have already been fixed out on long-term charters, but as they come up for renewal we will have to face today’s levels. However, we’re still very focused on LPG as we think the future is very bright for that particular sector.

“In the coming years we would like to see our fleet continue to be modernised by purchasing new ships, while also developing some new relationships with other industrial partners as charterers. I would hope that we can continue to go from strength to strength, with the view that within a few years we have a fleet of at least 20 ships at our disposal.”