The family-founded business Mirage Machines Ltd was established in 1993, bringing together a team of highly skilled engineers to produce a range of portable machine tools.

In 2006, Mirage joined the Acteon Group, a global subsea services business, which ultimately provided the strong foundation for international growth. To better service its customers in North America, particularly those involved in subsea operations, Mirage Subsea Inc was launched in Houston, Texas as a subsidiary company in June 2014.

Today, Mirage is still run by the founding Silk family, with managing director Richard Silk responsible for day-to-day operations: “We design and manufacture portable machine tools from our headquarters in Derby, UK. We aim to be at the forefront of on-site machining technology; enabling global customers across a number of sectors – including energy, nuclear, offshore, subsea, renewables and mining – to perform on-site operations efficiently, effectively and safely. For any piece of kit that a client can’t get to a workshop, we take the workshop to them to either repair or maintain.” 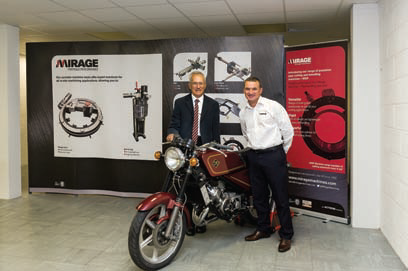 In 2014, Mirage was a finalist in the ‘Excellence in Manufacturing’ category at the Derby Telegraph Business Awards, highlighting the level of quality in the service it provides. Mirage has been granted ISO 9001:2008 certification for its design and manufacturing systems, as well as being able to provide full CE certification for all its products. “Research and development is fundamentally very important for us to maintain a strong position in the market place. We have a programme that collects customer feedback, as well as assessing gaps in the market place. We aim to be a leader in our field rather than a follower,” says Richard. Over the past 12 months, demand for the company’s products has been exponential, doubling since 2013. That number in fact reflects a figure that has trebled from 2010. “Part of this growth has been as a result of our presence in the US, which is a big market for us. We have also spent a lot of time in South East Asia and Australia developing these markets,” he explains. Working closely on contracts with the major service operators and nationals within the industry its customer base appreciates the quality solutions and speed of response offered, both in Derby and in Houston.

Owned by Acteon Group, Mirage has been successful in securing investment into the redevelopment and establishment of new facilities as Richard points out: “Setting up new manufacturing facilities and satellite offices is an expensive operation, particularly the aspect of recruiting key people from the industry. In Houston we have a 10,000 sq ft facility that we have grown to a workforce of nine employees in just 14 months. As a manufacturing facility it has been fundamental to the growth we have achieved. We have recently added another 5000 sq ft to the facilities in Derby on the back of the growth we have seen, adding a new corporate office, growing the site to 20,000 sq ft.”

For a business that only last year celebrated its 20th anniversary, the growth rate has raised the challenge of securing the appropriate degree of resources, including its workforce. Historically, Derby has a reputation as an engineering centre, and supported by a very clear strategy, Mirage has remained focused on actively developing this aspect. “Many years ago I was given a piece of advice from one of the directors of Acteon. He said, ‘go and employ the people you can’t afford’, and that is something that we have always followed. We recognise the importance of stretching the budget to employ the best calibre and quality of person. The result is that we are able to integrate them into our systems and processes very easily, and that way we have seen rapid start-ups, such as that in the US where we have quickly grown into a £4 millon-turnover branch. We also employ apprentices in the UK, putting them through a Rolls Royce  tools scheme, which is probably one of the best in the world for creating quality engineers. It is a £10 million training facility that we are able to plug into,” highlights Richard.

Operating across global markets provides the company with the flexibility to remain buoyant if certain markets dip. As the business looks towards the future it is actively establishing distribution and sales outlets in Singapore and Perth. “Geographical expansion plays a big part in the company’s future. We sell a significant amount of tools into the Middle East and mainland Europe and we will be targeting these two areas more aggressively in the future, addressing the potential for establishing bases there. The southern Norwegian aspect of the oil and gas industry is of particular interest. We aim to grow to a £16 million business by 2016 through geographical expansion. We have a three-year plan outlining exactly that in terms of resource and sales development in the regions where oil and gas is strong. We also have other avenues such as the European wind industry, which is a fast-developing market for our service,” Richard concludes.