Back to Profile Gallery > Montana Renewables

In Great Falls, Montana, renewable gasoline blendstock producer Montana Renewables (MRL) is ushering in a new era in US energy

Poised on the Continental Divide, Montana is a state of two halves. Slightly greater in size than Japan, the dramatic ranges of the Rocky Mountains in its western half give way, in the east, to the expansive prairie, steppe, and grasslands that comprise the Great Plains. It is a state defined by its abundant natural beauty, and the diversity of its wildlife – two features out of which have blossomed a number of unofficial nicknames, including ‘The Treasure State’, and the popular ‘Big Sky Country’.

In Great Falls, Montana, one of the nation’s smallest crude oil refineries is about to become one of the nation’s larger renewable jet and diesel producers. Calumet Specialty Products Partners is modifying the existing Great Falls facility to process up to 15,000 barrels per stream day (bpsd) of renewable feedstocks – including seed oils, used cooking oil, and tallow – into low-emission, renewable jet, hydrogen, diesel, and gasoline blendstock. These sustainable alternatives will serve as a direct replacement for fossil fuels, and will provide a major contribution to the western North American energy transition. 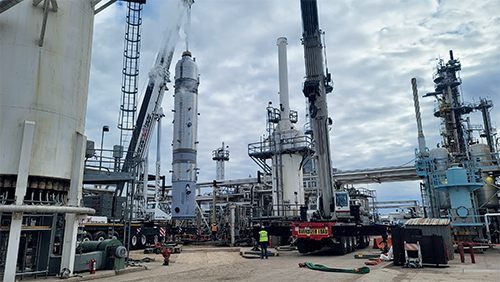 This year also marks a special occasion for MRL, and Calumet: the 100th anniversary of the Great Falls facility. For Bruce Fleming, Executive Vice President of MRL, it’s appropriate timing for a facility, company, and state, sitting on the precipice of a new era. “This decision is the end result of a three-year study of our strategic options,” Bruce says. “We’re preparing for the next 100 years by pivoting toward renewable feedstock as part of the energy transition economy.”

Adopting a local lens has its advantages for MRL. Strategically located close to major feedstock sources in both the US and Canada, Great Falls can access ten-times the company’s feedstock requirements within a close radius, including preferential access to differentiated north-western oil seeds like Canola, while creating a future demand for non-food oils such as Camelina.

Underpinning the decision, the expectation at MRL is that these non-food oils are set to become an increasing percentage of the future feed slate. But there are further advantages. As Bruce indicates: “Our proximity to feedstock and product markets decreases our carbon emissions, by reducing the cost of transporting both the renewable feedstock to MRL, and the renewable fuel to product off-takers.” Serving as an additional benefit are the set of five hydroelectric dams, positioned immediately downstream on the upper Missouri River, which provide the site’s electrical power.

“Montana Renewables’ process represents a leap forward through lower capital costs, better product carbon intensity, better yield, and greater speed to market,” Bruce explains, when asked about the revolutionary nature of the technology, which includes first-of-its-kind renewable hydrogen production, next-generation renewable feedstock pre-treatment, and a single-stage hydrogenation/isomerization reactor. “Each key technical element has been discretely demonstrated, and the flowsheet combination is a first. We have filed for a process patent for this superior approach to fossil fuel replacement by renewable fuel.”

To launch the production of its renewable fuels, MRL is operating according to a clear three-phase plan. “We’re currently at the stage of purchasing feedstocks, with the expectation that processing will commence in September of 2022,” Bruce indicates. “We’ll then look to add renewable hydrogen production in the fourth quarter, and commission our feedstock pre-treater by year’s end. This sequential commissioning was optimal for us to level the construction workload on our small site.” 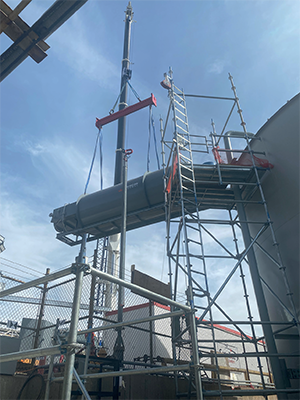 Although MRL’s operations are about to click into full gear, the journey to this point has not been without its challenges. The arrival of the Covid-19 pandemic could have posed a significant threat, but the company’s rigorous implementation of effective controls prevented events from having a material impact, and allowed MRL to remain focused on integrating the project into the local community.

In this, Bruce is thankful for the support that MRL has received from local and regional governments. “The State of Montana has been very supportive at all levels,” he confirms. “We’ve been having great conversations with local government officials, the business community, and local farmers and ranchers for more than a year to make sure that we’re the best neighbor and partner we can be.”

For those farmers and ranchers, the principal benefit of MRL’s operations is the arrival of a closer, fresh market for their seed crops and tallows. But the company is also active in its support for charities and community groups. “In Great Falls, specifically, we support United Way, Great Falls food bank, and provide energy assistance for Great Falls residents, educational grants, and more,” Bruce says. “We regularly engage a Community Advisory Panel to exchange information, perspectives, plans, and facts that matter to Great Falls, and get feedback on how we can be a valuable corporate citizen.”

These actions point to the strong set of core values that run through MRL, and its parent company. “Calumet cares about the communities where we live and work,” Bruce continues. “We strive to be a responsible part of those communities by contributing to the greater good through charitable giving, volunteerism, and employment opportunities. We have three key strategic purposes: education and youth development through science, technology, engineering, arts, and mathematics (STEAM); first responder support; and support for our immediate neighbors via critical community causes.”

MRL is already eyeing an expansion, with plans to process 18,000 barrels per day of renewable feedstock by 2024 – a move that will provide the company with increased flexibility for optimizing between renewable diesel and sustainable aviation fuel. It’s an ambitious goal, and a credit to the hard work of MRL’s employees as they seek to continually push new boundaries.

“MRL was merely an idea just two short years ago,” Bruce reflects. “You can’t pull off an intricate conversion project like this one, which also involves creating an entire business entity and its supporting structure, without the best team out there. Our team has really lived Calumet’s core values, collaborating and committing to making this project happen. Our team believes in this mission. We believe that we’re taking steps to benefit our families and communities for future generations, and giving this facility another 100 years of doing what is right and what is valuable.”