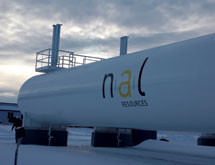 An established conventional oil and gas producer in Western Canada is setting its sights on doubling its capacity.

Established in 1990, Calgary-based NAL Resources Management Ltd. today produces roughly 18,000 barrels of oil equivalent (boe) per day from its holdings in Alberta and Saskatchewan. Roughly 65 percent of NAL’s holdings are liquids-based, with natural gas constituting the other 35 percent. Its operations include 2,700 producing wells, three natural gas processing plants and more than 35 oil batteries and satellites. NAL will drill approximately 140 gross wells in 2013.

The company’s five-year plan includes increasing its production to 35,000 boe per day by acquiring, developing and producing resources in Canada and the United States, President and CEO Kevin Stashin says. The plan also includes managing of assets for third parties who want to invest directly in the industry but lack the organizational and technical means to do so.

NAL Resources’ status as a 100 percent owned subsidiary of Toronto-based Manulife Financial – one of the country’s largest financial services companies – gives it a firm financial base on which it can expand. “Manulife is financially strong and is supportive of NAL’s business plan and strategy,” Stashin says. “Having a strong parent company like Manulife provides NAL with certainty of funding that allows it to pursue attractive acquisition opportunities. NAL has delivered solid results over the last 15 years, so there is an impetus to grow our company. We have no debt and have the ability to buy resources with cash, which makes us unique.”

Manulife Financial has operations in Canada as well as the United States and Asia. The company manages more than $515 billion in funds, and employs a global workforce of more than 26,000 employees, the company says.

Manulife’s backing and an acquisition and development strategy focused on long-term investments give the company an advantage in a market that has seen many companies struggling as a result of low gas prices and downward-trending crude oil prices. “There are a number of junior exploration companies in particular that have overextended themselves and tried to operate with a dividend approach,” Stashin adds. “We are seeing a lot of distressed and underfunded companies, making the market ripe for acquisition.”

NAL Resources’ financial security and ability to pay for new acquisitions with cash allow it to be selective with new assets. “We take a longer term view on pricing and returns; we can take some bets on the future of gas and oil moving forward as opposed to players who need cash today,” Stashin says. “We can be patient and selective and find the right assets instead of needing to buy something right now and overpaying for it.”

Positive Stewardship
NAL Resources believes strongly in being a positive contributor to all of the geographic areas – current and future – in which it operates.

“I think one of the biggest challenges for the industry as a whole is stakeholder engagement,” Stashin explains. “There are a lot of negative connotations around our industry, and not all are warranted, but I believe the industry as a whole does need to work better at showing that it is accountable to the public and strives to carry out the business of oil and gas responsibly.”

Although the oil and gas industry is not free from controversies or accidents such as pipeline breaks or leaks, Stashin says such incidents do not reflect the entire industry.

“We need to get the word out that we are reputable operators who work hard at protecting people’s health and reducing impacts to the environment,” he adds. “If the public does not think you’re acting responsibly, then they won’t allow you access to the land the resource, and ultimately you won’t have a company.”

For NAL Resources, positive stakeholder management begins in the communities surrounding its properties. “We believe in being a good neighbor and involving people to show them the things we’re doing that are safe and protective of the environment,” Stashin says.

The company’s corporate donations program supports nonprofit organizations, charities and youth programs. NAL is a regular participant in Calgary’s annual United Way program, for which it has been honored with a number of awards. These include the United Way’s Platinum Award, which recognizes the participation of more than 90 percent of NAL’s staff in fundraising campaigns.

NAL Resources also works to spread its message through its participation in industry organizations and programs. These organizations include the Canadian Association of Petroleum Producers’ Responsible Canadian Energy program, a stewardship effort that holds members accountable for meeting regulatory standards.

“The oil and gas industry needs to show people the work that we do, the strict regulatory environment that we operate in, and how well we overcome obstacles to do things right,” Stashin says. “We need to show people we are doing good things and that the industry is much more than just the horror stories you hear once in a while.”