Back to Profile Gallery > Natgasoline LLC

It has been three years since its startup and already Natgasoline has established itself as the largest methanol production facility in the US as a result of its strategic location. The Texas Gulf Coast has provided the company with access to excellent distribution and logistics infrastructure, and speaking with the company’s Plant Manager, Tim Crocker, we learn about how Natgasoline is committed to the Texan community and how the use of local resources is helping it achieve greener goals in the methanol manufacturing industry.

But what exactly is methanol? Also known as methyl alcohol, the clear, colorless liquid is mostly used to create fuel, solvents, additives, and antifreeze. In addition to a wide array of other new applications, the use of methanol as a clean fuel is becoming increasingly common. 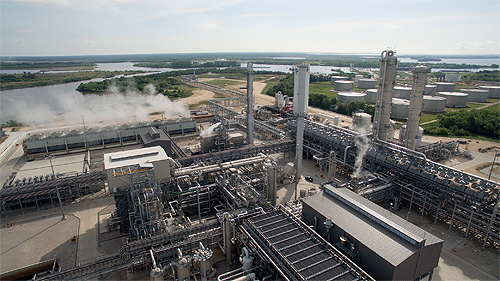 At Natgasoline, methanol is made by reforming Natural Gas and Steam; these two elements are combined, heated, and passed through a catalyst to produce synthesis gas. Then that gas gets compressed in the methanol catalytic converters to convert the synthesis gas into methanol and water, which is finally distilled to purify the product by removing all the water to 99.99 percent methanol purity.

The ability to establish a facility of this scale was not achieved solely by Natgasoline, but rather through a joint venture between Proman, and OCI. Both these companies are leaders in the methanol and fertilizer industry with assets across the globe. With these two businesses beginning their legacy, Natgasoline now produces over 1.7 million metric tons of methanol per year.

Support and partnerships are crucial to the success of Natgasoline. For example, the company has partnered with Air Liquide to supply it with over 2400 tons of oxygen per day. In addition, to meet the growing needs of Natgasoline’s production of natural gas-based chemicals, Air Liquide built an energy-efficient air separation unit to produce over 2400 tons of oxygen per day, nitrogen, and argon, which proved useful for the business’ extensive methanol manufacturing of 5000 tons per day.

Part of its partnership with Air Liquide also included the use of Lurgi MegaMethanol process technology for the Beaumont-based facility. “The Air Liquide technology is one of the most energy-efficient conversions to make methanol from natural gas. Added with that benefit, we also live in the Texas region, which has the most competitive natural gas pricing available in the world,” says Tim.

“We have an excellent relationship with Phillips 66, who manages terminal storage for our outbound logistics,” Tim says. Phillips 66 is a diversified energy manufacturing and logistics company with unique businesses in refining, midstream, chemicals, marketing, and specialties. In addition, Phillips manages terminal storage with Natgasoline of approximately 150,000 metric tons of methanol, as well as the loading of marine vessels and pipeline transport. The facility is also located near six natural gas interstate pipelines, which provide access to several liquid trading pools for its feedstock.

While installations of this magnitude are necessary for the business to succeed in supplying its customer base, its management team is passionate about establishing strong working relationships with its employees and partners. This is why the methanol-producer invests significantly in human and environmental resources to ensure that its product is the very best.

Working with this sort of product requires a thorough implementation of safety measures, and Tim emphasizes that the wellbeing of his team is at the top of his priority list. “Our primary focus as a methanol producer will always be employee care and environmental protection, as is the case with all fuels and chemicals. We are big believers that methanol must be produced, handled, stored, and transported safely,” he expresses. The company believes in enforcing regulations and industry practices to world-class standards, ensuring that its facility is operated in a safe and sound manner. By utilizing the Occupational Safety and Health Act (OSHA) Process Safety Management Standards, EPA’s Risk Management Planning regulations, and a multitude of other state and federal environmental programs, Natgasoline guarantees that its product is managed with caution to reduce its impact on the environment.

The support of these impressive corporations has allowed Natgasoline to refine the workings of its internal business and establish a team of dedicated and highly skilled staff. Not only do these values buttress the company culture, but they also serve as the foundation of many young engineers who begin their careers with the company. “We’ve also done some partnering with Lamar University where we recruit interns, publishing technical papers, and we’re slowly training our core staff to be familiar with the Sigma process improvement method,” he discusses, adding that these practices will help strengthen the team’s ability to work together and build each member’s confidence from the ground up. 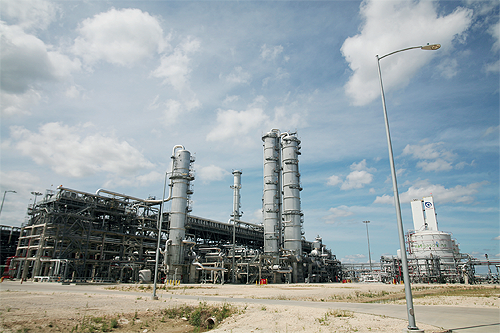 Coupled with technical efficiency, Tim believes that effective leadership is driven by accountability and sustainable alliances, which is why he prioritizes leveraging relationships and putting the right resources, capability, and skills into problem-solving. “Two years ago, we rolled out the new mission and value statements that were focused on care, safety, accountability, integrity, and teamwork, and those have been the pillars of our business ever since. The development of our personnel and the empowerment to run the facility and generate improvement is so key to us,” he explains.

“In many ways, our success is because we value our partnerships and almost every one of the departments inside the Natgasoline is a hybrid group that we would generally refer to as a ‘salt and pepper organization’ if you will. Basically, this means that we have our employees working side by side with outsourced engineers and other support teams that are embedded within our staff. Our culture values employees, and aims to develop them and their capabilities by taking care of everyone. On the flip side, we also empower them to make their own decisions and be held accountable for their results and, like we mentioned before, this is integrated with how we train and develop them,” he expresses. From Tim’s experience, there are very practical examples of how the business has continued to uplift its team by providing critical support for its employees through times of hardship and disaster.

The Lone Star state is known widely for frequent natural disasters such as floods, hurricanes, severe storms, tornadoes, and wildfires; each of which can have devastating consequences for many Texan citizens. This is why Natgasoline goes out of its way to look after the employees who are impacted by these circumstances. “The setbacks we’ve had over the last two years, like Covid-19, local flooding, several hurricanes, and the severe freeze at the beginning of 2020, we put in measures to support everyone who was affected in whatever way we could because that reflects the values of who we are,” he informs us. According to Tim, these measures included providing meals, generators, and equipment needed to help clean and mend the houses that suffered severe damage.

Natgasoline’s instinctive reaction to serve its employees practically is also what enabled it to manage the instability of Covid-19. While the business implemented the necessary measures to look after its staff, it also took health and safety one step further by providing onsite testing for its team. “We have always been extremely aggressive in how we approach challenges and obstacles, Covid-19 was no exception, so we were one of the first organizations using onsite antibody testing, temperature checks, onsite vaccine offerings, and other aggressive control measures. We were offering that to people coming in and out of the site, not only for our employees, and this was many months before you could actually go and get tested at a local clinic,” Tim informs us.

Running adjacent to its goals to create an innovative working environment is its vision to incorporate sustainable technologies to lead the gas sector towards a greener future. Natgasoline believes that the selection of safe and environmentally responsible technologies is inherent for sustainability. For example, its methanol process technology uses cleaner-burning natural gas as both a fuel and a feedstock.

Natural gas can emit between 50 and 60 percent less gas than other coal-derived feedstocks or fuels, and this is why during normal plant operations, Natgasoline employs process gas recovery systems that allow it to utilize recovered streams as supplemental fuel. This technology also utilizes excess steam and heat from the process through an efficient waste heat recovery system that enables greater efficiency and reduces the amount of fired sources needed to produce heat. In addition, a large volume of condensed steam from the process is also cleaned and conditioned as a supplemental ‘make-up’ water feed sent back through the system to reduce the plant’s water use.

“For us, each move of sustainability is with the intention of empowering the oil and gas industry to lead by example. Therefore, we are pursuing a long-term path of greenhouse gas reduction. Still, the real advantage for us is that we have efficient technology. So, despite already being one of the most efficient producers globally, I would be comfortable in saying that we have long-term goals to continue improving utilizing cutting edge and innovative examples in our greenhouse gas reduction,” he explains.

With impressive operations already in place, Tim is sure that when looking ahead, Natgasoline is going to continue to pursue a greener, safer future in methanol production. “I would say that our role going forward is to have a reduced environmental footprint and further secure our position as a globally low-cost methanol producer, and continue to further improve the energy efficiency advantage that we have with the technology,” he shares.

Despite the few years that the company has been in operation, Natgasoline is certain about the values and the legacy it wants to impart to the gas sector. Its ambition to be an example in curating a balanced and safe company culture, while also prioritizing sustainability, is setting it in good stead to be one of the leaders in the industry.