Nederlandse Aardolie Maatschappij BV (NAM) is the largest producer of natural gas and a major oil producer in the Netherlands.

The company was established in 1947 as a joint venture between Shell and ExxonMobil to produce oil from the newly discovered Schoonebeek oil field. Just one year later, NAM made the first natural gas discovery in the Netherlands in Coevorden and, in 1959, the company discovered the Groningen gas field near Slochteren, which is one of the largest in the world.

The discovery of the Groningen field, which is estimated to have original producible gas reserves of approximately 2,700 billion cubic metres, opened the door for offshore gas production and exploration in the region. In 1961, NAM became the first company in Western Europe to drill for gas in the North Sea. Today, NAM is responsible for an annual production of around 50 million cubic metres of natural gas – more than half of which comes from the Groningen field. The remainder is procured at various smaller fields either in the North Sea or upon the Dutch mainland. The gas produced by NAM represents approximately 75 per cent of Dutch demand, whereas its oil accounts for around a quarter of the country’s production.

Chiel Seinen, external relations director at NAM, discusses some of his company’s key strengths: “One of the benefits we have is that we can call upon the international experience and knowledge of our two mother companies, and then apply it at a national level. Their operational excellence, combined with the vast knowledge we have of the oil and gas industry in the Netherlands, enables us to maintain a very strong and stable position on the market.”

There are still other factors at play in NAM’s dominance of the Dutch market however, as Chiel reveals: “Another vital strength of the business is our ability to remain innovative by 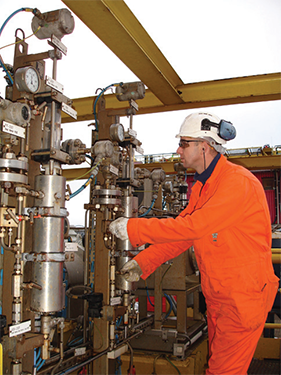 constantly creating new technology. We are always looking to implement new techniques to get the most out of our fields, which is why some of the solutions we have developed for the Dutch market are the first of their kind, anywhere in the world.”

NAM is currently developing a number of small fields, and the company is continually expanding its production capacity, according to Chiel: “On average, we drill six new onshore fields every year, followed by a further four offshore fields. In addition to these new fields, we are always looking to find new techniques that will help us get more gas from the fields that we already operate and really maximising their production.”

Amongst the pioneering products developed by NAM is the ‘KISS’ skid – its name derived from the ‘Keep It Simple, Stupid’ ethos. Chiel explains exactly how this product works: “This is a mobile, modular unit, that can be used at one gas field after the other, and is transportable by truck. The equipment is particularly useful for producing gas from small fields. The skid is part of a series of smarter and simpler equipment innovation, minimising environmental impact and reducing costs at the same time, so that even small fields can be produced. Other innovations in this series are the monotower for offshore use and the Drilltech Synergy (or light land rig, a 30 meter high drilling rig instead of the traditional 60 meter high units). We are always looking to streamline technology in this way in order to become more efficient and cost-effective in our activities.”

NAM is also modernising its operations in the Groningen field, according to Chiel: “We produce gas from 20 clusters across Groningen, all of which travel via pipeline to a specific area. After having been in operation for nearly 50 years, these production units were all upgraded in a major two billion euro long-term project that ended last year. This has been the first renovation operation of such scale that we have conducted, and we are very impressed with the results. The Groningen field is now in shape to produce another 50 years, although new renovation projects will be needed in due time”

These are not the only developments taking place within NAM’s busy schedule, with the company also being actively involved in underground gas storage at the moment. Chiel continues: “Our company currently operates two of the country’s three underground gas storage facilities. This is an area where we are predicting significant expansion, particularly as the resources in the Groningen fields are decreasing and it is becoming more difficult to retrieve the gas from it. A buffer is therefore needed in times when gas is needed quickly – like last winter, for instance, when it was particularly cold. Underground gas storage is ideal for this, and so we aim to continue the expansion of our storage facilities.”

With such a vast array of projects underway, NAM looks set to continue its domination of the Dutch natural gas market, whilst continuing to strengthen its foothold in the oil and storage market. Chiel concludes: “There is more than enough work for us in all three areas, and will be for many years to come. The world is beginning to realise that natural gas is the cleanest fossil fuel available, and so can play an important role in the transition in to a sustainable future.”