Back to Profile Gallery > Neptune

It was formed during 2003 in Perth, Australia, and since that time has expanded globally to include offices in Asia, UK, US and the Middle East. Having established itself as an innovative leader within the oil and gas sector, the company is also active in the renewable energy market.

Business development director Kevin Stephen goes into further detail about the company’s structure: “With offices in Aberdeen, Dallas, Jakarta, Singapore, Darwin and of course Perth, and with the recent acquisitions, the company now numbers over 800 employees across the world. The recently formed operational functions are subdivided into geographic regions, each headed by regional vice presidents.”

Neptune Europe/Mediterranean/Africa (EMA) from its regional headquarters in Aberdeen, Neptune delivers EOS or Engineered Offshore Solutions; a portfolio of high performance capabilities which can be supplied either as a total solution or as an individual service, according to the specific requirements of each project. The region currently employs 185 people.”

Formed by experienced executives including former senior Subsea 7, Technip and Schlumberger staff, Neptune consists of many engineers and management staff that have had up to 25 years individual experience within the offshore oil and gas industry. Regional vice president for the EMA region Lodewijk van Wachem, for example, formerly acted as COO for Subsea 7 and was responsible for that company’s development in Brazil and West Africa, turning it into the region’s biggest provider of services. 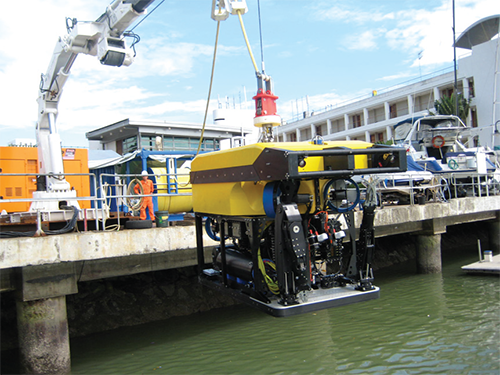 Neptune has taken this wealth of expertise and left it to seed within the company, becoming one of the leading fully integrated offshore solutions companies in the industry. The scope of these offerings ranges from the initial survey of a field, to the design and manufacture of subsea production equipment, to asset integrity assurance, to field intervention and incremental field expansion, to infrastructure life extension, and the final phases of asset life.

Kevin describes one of Neptune’s innovative technologies, NEPSYS, dry underwater welding. “It is a unique, class approved technology that produces a permanent surface quality weld in an underwater environment. The patented system was developed to improve conventional methods of offshore maintenance and repair. This has been popular for use on floating production storage and offloading (FPSO) vessels as well as subsea structures.”

Neptune’s integrated service offering is delivered by a team of highly professional and experienced personnel who are dedicated to providing customised solutions to their clients’ individual needs. These capabilities are demonstrated in its FEED studies, which optimise the design of subsea architecture for flow assurance performance and operational flexibility, in a cost effective manner. Neptune’s reputation for delivering high quality results is also well established in offshore installation work, general engineering, refurbishment, as well as the assembly and testing of production equipment such as subsea trees and wellheads carried out at its workshop facilities near Aberdeen.

This was a fast track project award and mobilisation in under a month and involved full vessel integration of positioning services including the relative positioning of tugs for anchor management, ROV and survey services. The project timescale was July-October 2010.

Paul Stren, BritNed survey package leader/deputy project manager commented after the project. “Neptune’s personnel onboard the vessel have been first rate. Our offshore manager has spoken highly of Neptune’s drive and professionalism which has been appreciated.”

In the last few years the company’s Aberdeen-based EMA division has become an industry leader in the area of offshore renewable energy projects, such as tidal power generators and wind turbines. This year, Neptune recently completed conceptual design and development of subsea hydraulic modules and development/recovery equipment for the Oyster 2 renewable energy system. This move into the renewables sector represents not a change in direction for the company but an expansion of its already wide-ranging capabilities.

In addition, Neptune owns and operates two dynamically-positioned vessels and a fleet of inspection and work class ROVs, which provide support for its work in subsea inspection, survey, positioning and pipeline stabilisation work scopes.

The company is looking at new regions to work with: “At the moment we’re looking primarily for more work in the UK, Europe, the Mediterranean and West Africa,” says Kevin. He goes on to talk more about Neptune’s future: “We are looking globally for new fabrication projects, in areas where we’ve yet to have much involvement, and in Nigeria and Angola we are hoping to gain more work with OEMs. At the moment, for example, the company is in discussions with Cameron for a maintenance contract to support their work in Nigeria. Ultimately, we are looking to tie the capabilities that we have in the UK into countries around the world.”

Concluding, Kevin is confident with Neptune’s strategy for the road ahead: “We’ve got a development strategy in place, where we plan for rapid development in the aforementioned countries. We hope to complete this by early December of this year before implementing a second phase strategic plan that will involve targeting key clients in key countries and improving the level of our services to them.”