Back to Profile Gallery > NET4GAS

The holder of the exclusive gas Transmission System Operator (TSO) license in the Czech Republic, NET4GAS s.r.o. provides safe and reliable gas transport services on a non-discriminatory basis to all natural gas traders 24 hours a day, seven days a week.

Guaranteeing transparent access to its transmission system and transmission capacities, the company satisfies both domestic and foreign demand by transporting 45 billion cubic meters of natural gas annually; approximately 20 per cent of which is for domestic consumption, while the majority is transported internationally into neighboring markets.

Chief executive officer Andreas Rau gives a brief history on the company: “NET4GAS is the legal successor of the companies Tansitní plnovod, n.p., Transgas a.s., and RWE Transgas Net, s.r.o. and has more than a 40 year history in international gas transit and domestic gas transmission. Committed to conducting business with a view to ensure the independent, reliable and safe operation of the Czech gas transmission system, NET4GAS provides both national and international partners with gas transmission services. The company was acquired by a consortium of Allianz Capital Partners and Borealis Infrastructure in the summer of 2013.”

With a team of 500 highly qualified employees covering the operation of more than 3800 kilometers of pipeline, NET4GAS currently connects markets in all directions through cross-border interconnectors and capacity products. The company also focuses on developing long-term relationships with its partners, and champions further market integration via projects and products that boost co-operation between European TSOs. Keen to remain a relevant fixture in delivering solutions to Europe’s gas needs, the company recently made a strategic decision to take a pro-active role in shaping the European gas markets. This enables it to play a part in developing the future European Gas Target Model (EGTM) and to develop strategic plans in line with the EGTM’s vision, which is to efficiently manage its transmission system and meet the demand of its customers through cutting-edge gas transport services that minimise environmental impact.

Previously in European Oil and Gas Magazine in March 2013, Andreas discusses the market conditions over the last 12 months: “Last year was very important for designing the rules of the next regulatory period, which should start in January 2015. This process, which is the responsibility of the Czech Energy Regulatory Office and comprises of several consultation steps that also involves other stakeholders, will continue in 2014. The outcome of this process will also have a major impact on whether the Czech Republic will provide a stable regulatory framework and thus continue to be an attractive destination for foreign investment in the energy sector.”

He continues: “Furthermore, at the European level we supported the development of several new network access rules, together with the other European gas TSOs and the Agency for Co- 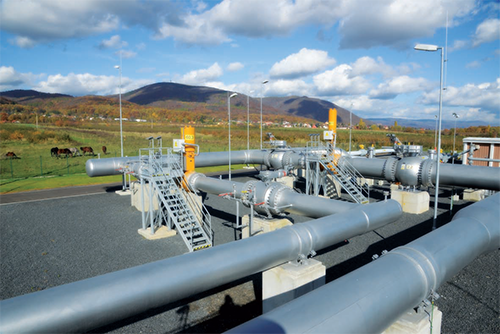 operation of the European Regulators, ACER. This process is aimed at further market integration in Europe, thus increasing competition and decreasing end consumer prices. As this can not be achieved without additional investment into cross-border transmission capacities, it is of utmost importance to have a stable and sound investment environment.”

Currently providing transmission services to almost 50 shippers, ranging from smaller traders to major gas producers, the firm’s core target throughout 2014 is to ensure the parameters are set in a way that enables ongoing investment into transmission capacities and therefore continued market integration throughout Europe.

Another way to expand further in the gas sector is to focus on projects that reinforce this integration, as Andreas highlights: “Naturally for us, the starting point will be closer co-operation with the neighbouring CEE countries, especially with our Polish and Austrian partners in order to make available sufficient cross-border capacities. In the context of the interconnector project between the Czech Republic and Poland, we also need to upgrade the domestic pipeline system in the Moravia region. This is an important area for regional industrial development and could potentially become the nucleus for real integration of the Polish and Czech gas markets.” However, with the cost of this planned investment estimated at 200 to 250 million euros, the refurbishment of the existing pipeline is highly dependant on an adequate regulatory framework. Major projects for the company include ‘Gazelle’, which was put into operation in January 2013 and highlights its commitment to increasing transmission capacity and flexibility to benefit the European gas markets. Interconnecting the Northern and Southern routes, the Gazelle pipeline further ensures secure and reliable gas transport by connecting the Czech Republic to Russian gas supplies coming into Europe via the Northern route before connecting with the OPAL pipeline, which runs the gas down as far as Brandov, on the German-Czech border. “Gazelle connects the pipeline system of Nord Stream and OPAL with the traditional East-West route at Waidhaus in Germany and is thus part of the new strategic transport corridor for supplying Russian gas to Western Europe,” highlights Andreas. “This project was implemented by NET4GAS on time and on budget; with a total investment of almost 400 million euros it is one of the biggest gas infrastructure projects implemented in the CEE countries recently.

“Furthermore, in 2013 we successfully completed the last of our projects co-financed by the EU under the European Energy Programme for Recovery (EEPR). Three projects have been implemented under this programme: Reverse Flow in Direction West-East, Czech-Polish Interconnector (STORK I) and Connection to the Storage Facility UGS Tvrdonice,” he adds.

Firm in its belief that national and European regulators should get more aligned and focus on EU market integration instead of focusing on short-term interests in decreasing energy prices through tough infrastructure regulation, NET4GAS wants to stimulate the development of truly competitive gas markets over the coming years. “This is our vision,” says Andreas. “We believe this is the most efficient and effective way of decreasing energy prices for end consumers in the medium and long-term perspective. It is clear though that regulators need to support this process by giving reasonable investment incentives to infrastructure operators.”