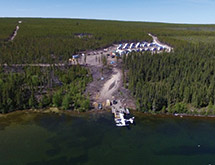 Finding a world-class asset is a major development for any exploration company, and it’s one that not every exploration company gets to experience. For NexGen Energy Ltd., finding the Arrow discovery in the Athabasca Basin in Saskatchewan was a significant accomplishment, one that the company plans to build upon in the years to come.

Corporate Development Manager Travis McPherson says the discovery of the Arrow property gives NexGen a position in the marketplace virtually unmatched by other exploration companies. Based in Vancouver, NexGen Energy was co-founded in December 2011 by CEO and Director Leigh Curyer, a veteran of the uranium sector with nearly two decades of experience. He has been involved in all facets of uranium exploration and development from exploring, economic studies, permitting, raising project capital and production. He also spent three years in private equity at First Reserve International looking at uranium projects around the globe from a technical, financial and sovereign risk perspective.

McPherson explains that Curyer and Chairman Christopher McFadden who formerly ran Rio Tinto’s uranium division founded the company after looking through more than 200 properties in the Athabasca Basin in northwestern Saskatchewan. Even though the uranium market was in a downturn at the time, the duo knew that nuclear energy would continue to be a major part of the global energy mix for a long time to come and took advantage of the pessimism in the market at the time. After only eight holes completed at Arrow, Garrett Ainsworth, vice president of exploration, joined the company coming off his success at the Patterson Lake South discovery where he was awarded the Colin Spence award by AMEBC.

Arrow and Bow
The company holds the most dominant land position in the southwest Athabasca Basin but it was science that drove the group to acquire the properties. “We had a great deal of confidence in the geologists that put together the southwest package as it straddles the basin boundary and hosts all of the major known conductor corridors which is what you want when exploring for economic uranium in the basin,” McPherson explains. “Having the dominant land position in the southwest Athabasca Basin is definitely strategic and valuable, but by far the most valuable area of our company is the world-class Arrow discovery.”

The flagship of the company is the Arrow zone, which was discovered in February 2014 with the very first hole drilled in that particular geophysical target. “The Arrow zone is your typical geophysical target when looking for high-grade uranium in this setting; a gravity-low coincident with a break or kink in the conductor,” McPherson says. At the time of the discovery, no other holes existed within a four-kilometer radius.

What makes the Arrow discovery so exciting for NexGen Energy has as much to do with where it is as it does with the high-grade uranium mineralization contained within it. Across most of northern Saskatchewan, the majority of uranium deposits had been found underneath lakes.

The Arrow discovery, however, is under dry land, which makes it much more straightforward in terms of determining the environmental impact the project might have. McPherson says the uranium is hosted within the competent basement rock, as well, which makes for better mining conditions than typical uranium deposits that are found within the Athabasca sandstone and/or the unconformity (the contact point between the basement and the sandstone). He compares the grades seen at the Arrow discovery as being on par with the best uranium projects elsewhere in the Basin, making Arrow a “world-class” asset by any measure. “Our technical team has a mandate to be bold and not to be afraid of missing yet we have hit in over 95 percent of our holes drilled,” McPherson explains.

In addition to the significant discovery NexGen Energy made with the Arrow zone, the company quickly followed that up with a new discovery called “Bow” which was made early in the winter 2015 program.

Aggressive Schedule
Although NexGen Energy finds itself in a good position relative to its peers, the same downturn in the uranium market that helped it attain its land package remains a challenge for the company. “From our perspective you won’t see the general markets enter the uranium sector in a meaningful way until you see the spot price move in a positive direction,” McPherson says. “Japan restarting its reactor fleet is a positive catalyst for that to occur as it relieves the rumors that Japan would never restart and therefore their stockpiled uranium might hit the market and put further downward pressure on the price. With the build out in China and the continued support for nuclear across the world, we see a supply-side that is under severe technical or sovereign risk combined with a constant growth in demand.”

NexGen plans to continue with its aggressive drilling campaign where it was recently successful in tripling the strike length of the high-grade core zone of Arrow with 55- 100- and 210-meter step-outs that all hit mineralization. McPherson says the company will continue to focus on Arrow as its flagship, but it will also be working to discover the next Arrow.

“We don’t only want to find these things, but we want to find them in the most efficient manner as possible in terms of time and cost,” McPherson says. “A key ratio we focus on is dollars into the ground versus overheads, and ours is currently at $8 to $1. This is a metric everyone at NexGen is dedicated to and we are already improving it closer to $10 to $1.”