Back to Profile Gallery > Nord Stream

At over 1220 kilometres and capable of transporting up to 55 billion cubic metres of gas each year, the Nord Stream pipeline development represents one of the most important energy infrastructure projects in Europe and will play a key role in the future energy security of the continent.

Connecting the EU with the enormous natural gas reserves in Russia, Nord Stream is more than just a pipeline. Not only does it set the benchmark for modern infrastructure developments, but also at full capacity it is estimated to be capable of supplying more than 26 million households with natural gas.

European Oil and Gas recently spoke with Paul Corcoran, financial director at Nord Stream, to find out more about how the project is progressing. “It is all systems go,” he explains. “The first pipes were laid on schedule in early April this year, and construction of the first pipeline is progressing as planned. In January we announced the last of our major supply contracts, when we awarded contracts to Europipe, OMK and Sumitomo to supply the 100,000 steel pipes, that’s 1.2 million tonnes of steel, which we will need for the second pipeline. Following the successful conclusion of Phase One financing – when we were 60 per cent oversubscribed – we will shortly be returning to the financial markets for Phase Two financing.”

As natural gas becomes an increasingly important energy source the number of pipeline projects is expanding rapidly. However, Paul feels that the sheer scale and capacity of Nord Stream sets it apart from other developments: “At 1224 kilometres this is one of the biggest infrastructure projects ever in the Baltic region. The two lines that make up the Nord Stream Pipeline system will require 200,000 pipes, each of them 12 metres long, 48 inches in diameter and – when concrete weight coated – each weighing about 25 tonnes. Additionally, many contractors are involved in the project at any one time. For example, for several months in 2010, three pipelay vessels will be working simultaneously at different locations, around the clock, seven days a week. “ 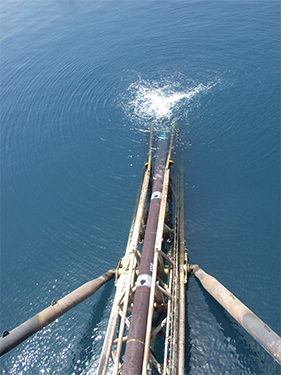 As Paul explains, using three pipelay vessels is essential on order to meet the demanding requirements of Nord Stream: “Most of the Nord Stream Pipeline will be laid by Saipem’s Castoro 6, which is an anchored pipelay vessel. However in the Gulf of Finland, we have decided to use the dynamically positioned Allseas Solitaire, so as to avoid anchoring in areas known for very dense ship traffic and mine lines. There is also a very different challenge at the other end of the pipeline route; the shallow waters in and outside the Greifswalder Bodden, in Germany, are inaccessible to large pipelay vessels, so we will be using Saipem’s Castoro 10, a moored flat bottomed lay-barge with less draught.”

The correct choice of vessel for the operation is just one of the important factors effecting Nord Stream. As Paul comments, the sheer scale of the project has presented challenges in the manufacture of the pipe itself: “The pipeline has three segments with different design pressures (220, 200 and 170 bar), with corresponding variations in wall thickness. These segments will have to undergo separate tests to verify that they can withstand the operating pressure. Secondly, we have a very complex construction schedule in order to meet the large number of environmental factors that must be taken into account, from fish spawning to ice coverage. It would be impossible to accommodate all these factors by laying all 1224 kilometres of the pipeline all the way in one go.”

Environmental concerns are of course paramount for Nord Stream, with opposition to the project questioning how the pipeline will affect the local area. Paul elaborates on how seriously these concerns are being taken: “We started by investing some 100 million euros in environmental and routing studies to ensure that our pipeline will be safe and environmentally sound. We appreciate that the environment of the Baltic Sea is extremely sensitive, so we are working meticulously to ensure minimal impact throughout construction. We have therefore developed a sophisticated pipe-laying schedule to meet environmental restrictions while enabling the construction vessels to work as efficiently as possible.

“We took many factors into account to achieve this,” he says. “For example, we planned construction so that no ice-breaking will take place during critical breeding periods for seals and to avoid important fish spawning periods. Right from the very start of the project we have been committed to meeting high environmental, health and safety standards, and we have drawn up a comprehensive programme to ensure that our suppliers, contractors, sub-contractors and we understand and respect these standards.”

Thus far Nord Stream has been nothing but a success. The project is proceeding as planned and within the strict regulations set, and as such, Paul is confident that it will be able to deliver its full capacity in the near future: “Nord Stream is a long-term investment by long-term contracts, and as such it will make a significant contribution to Europe’s energy security for decades to come by linking the European energy grid directly to some of the world’s largest gas fields.”