Nord-West Oelleitung GmbH (NWO) was founded in November 1956 in Wilhelmshaven, in order to build and operate the first long-distance oil pipeline in Europe, and therefore secure the supply of crude oil to several oil refineries in Emsland and in the Rhine/Ruhr area.

Construction work began at the end of 1957, and after just a 12-month period, operations began. The major operating components within the site include the tanker discharge pier, the oil tank farm, and a 28-inch long-distance oil pipeline, which runs 391 km from Wilhelmshaven to the Rhine/Ruhr area including all refinery branch pipes, along with all of its related technical systems. NWO is also the operating company for the 144 km NDO pipeline from Wilhelmshaven to Hamburg. Today NWO is owned by four primary shareholders – Shell Deutschland Oil GmbH, Holborn Europa Raffinerie GmbH (HER), Ruhr Oel GmbH, and BP Europe SE.

Since operations began in 1958, NWO has become Germany’s most important oil port, as Rudolf Schulze, managing director, highlights: “About 20 per cent of oil imported into Germany is handled through our facilities. The majority of the remaining crude oil is either imported by pipeline or by tanker through harbours outside of Germany.” This position is facilitated by the Jade waterway, which is a narrow sea channel, with a large flood reservoir area called the Jadebusen at its end. Access to Wilhelmshaven, which is Germany’s only deepwater port, is via the 650 m wide buoyed shipping lane and with a tidal range of 3.6 m at the oil port, even fully loaded tankers with a draft of 20 m and capacity of 250,000 tonnes can call at the port. The distance from the approach point in the German Bight through to the NWO terminal is only 46 km, and it is this deep, wide and relatively short approach from the sea, which promoted NWO to settle in Wilhelmshaven.

Typical customers for NWO include its four shareholders, which operate refineries along NWO’s primary long-distance pipelines. In terms of other clients, the company offers a number of services to third party customers: “Over the past decade we have developed various services comprising of the operation and/or monitoring and maintenance of pipelines for crude oil and natural gas for third parties. Furthermore we rent out tank space for crude oil storage, and through our relationship with EBV, IVG, and BP, can also utilise three cavern systems in Wilhelmshaven, Etzel, and Ochtrup that are connected with the NWO terminal, with a total storage capacity of approximately 1.6 x106 m3,” describes Rudolf.

One of the core aspects of NWO’s business is its tanker discharge pier, which is 1207 m long, lying close to the shipping channel and parallel to the tidal flow into the Jade. There are three jetties available to receive the oil from the tankers, which are all located on the shipping channel side. The pier is linked to the land via a 670 m long access bridge. The tankers use their own pumps to pump the oil into NWO’s tanks being discharged, with up to 12,000 cubic metres per hour (m3/h) of oil capable of through jetties one and two, and up to 16,000 m3/h through jetty three. 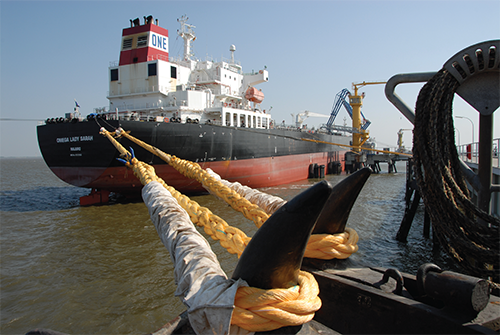 Given the technical dimensions of jetty four, even large tankers with a displacement of 350,000 tonnes carrying partial loads can be accommodated. Commenting on recent developments within the pier facilities, Rudolf says: “We have just started to operate a new insulated heated transfer pipeline from the jetty to the tank farm. This pipe enables us to accept crude oil with a maximum temperature of 80°C (176°F) and can also be used to transport heavy and highly viscous crudes.”

Within the terminal premises NWO also maintains 26 tanks, each with 30,000 m3 volume, and nine tanks with 100,000 m3 volume for the immediate storage of the imported crude oil. Throughout any twelve-month period more than 50 different grades of crude oil are separately stored here. All of the tanks are connected underground through a pipe system, which is centrally remote controlled, as well as to the tanker discharge pier and the pipeline pumping stations, which are the starting points for the NWO and NDO pipelines.

At the heart of NWO are the two long-distance pipelines – the NWO and the NDO. The NWO pipeline is both operated and maintained by the company, and given that the 391 km pipeline – including the refinery branch pipes – is constantly filled with 147,000 m3 of various grades of oil, this is a considerable task. “Naturally a pipeline of 50 years or more in age needs a lot of maintenance and careful monitoring,” explains Rudolf. “At least once a month NWO staff walk or drive along the entire pipeline, including the refinery branch pipes, to ensure it is operating safely. A helicopter is also regularly flown along the length of the pipeline, and special monitoring is undertaken in the mining areas of the Ruhr region as these activities could cause ground subsidence.

“In an industrial country like Germany the highest risk of incidents comes from third party activities such as digging, dredging or other works next to the pipeline, so one of our primary objectives is to monitor carefully any such activities in the area.” All of these procedures make up only one part of NWO’s comprehensive safety and environmental protection policy. With over 50-years of practical experience behind it, many of NWO’s special safety and control mechanisms go far beyond the regulations imposed by the law. This commitment can be seen across all aspects of the business, and is reflected in NWO’s years of incident free operations.

In line with its position as Germany’s leading oil port, NWO continues to invest in its services and facilities, implementing state-of-the-art safety systems and modern technologies in order to strengthen its assets. With this foundation in place, Rudolf describes the current business opportunities within the market for NWO: “Somewhat surprisingly given the market conditions, we have had a very positive period over the last year with throughput and turnover figures above those expected. Over the past few years we have placed a focus on de-bottlenecking and I think this has been a key advantage as we were in a position to transport all of the crude oil our shareholders requested. The capacity of the NWO pipeline has increased to some 16.3 million tonnes per annum, and as we expect crude oil consumption to remain unchanged going forward, our ongoing business looks secure. One of our primary objectives is to maintain our leading safety policy and record of zero incidents and beyond this, to further extend our third party offering and use the expertise and know-how we have developed over the years to benefit our clients.”