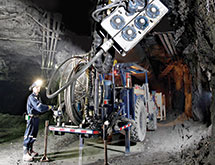 When doing typical blasting in a mine, it is common that fractured rock exists around the perimeter of the blast that creates a safety hazard because the loose material is at risk of falling on miners. A product that can eliminate or minimize this risk can decrease the chance of injury and can also save time and costs associated with “screening and bolting.”

Nordex Explosives Ltd. obtained the exclusive rights to a perimeter control product developed in Australia and decided to retain the catchy name “Buttbuster” used by Johnex Explosives Ltd. The name was well-known by people in the mining industry and its use well-understood. “We thought it was unique, so we kept it,” Nordex President and CEO Jim Taylor says of the name.

“It’s a specialty product designed specifically for perimeter control in both underground and surface blasting,” Taylor adds. Buttbuster controls the amount of energy in the outside holes of a blast, thereby minimizing excess breakage and fracturing.

“We are the first and only place that this product has been licensed – not only to sell but also manufacture – outside of Australia,” Taylor maintains. “A lot of the larger multinational mining companies are familiar with the product. It’s been very successful in Australia.”

Nordex Explosives anticipated similar popularity for the product in Canada, so in 2013, it built a 2,500-square-foot plant to manufacture the Buttbuster products in Kirkland Lake, Ontario. This is in the heart of gold mining country, where many Nordex customers are located.

“Primarily, the focus with emulsions for us has been around bulk emulsions, because we believe there are a lot of potential economic savings for our clients,” Taylor says. “We came up with our own unique variations on formulations, as well as our own technology on how to mix and blend the products. Our philosophy is that all of our quality control is at our plant and is not done out in the field.”

Nordex’s emphasis in developing these products was to make them more stable and safer to use.

“Our company is the only one that is actually manufacturing and packaging what is known as small-diameter, cap-sensitive stick powder in Canada,” Taylor asserts. “We make a full line of products from 1 inch in diameter up to 6 inches in diameter. It’s a very precise product that requires a lot of quality control and special care to make.”

Growing Pains
Taylor concedes that all of the research and development necessary to position the company resulted in many growing pains. “We believe most of that is behind us at this point, but anytime you want to grow, it’s always a challenge for a smaller company to allocate its resources in the best way possible,” he declares.

He estimates that 30 to 35 percent of Nordex’s business is related to quarries and the construction industry rather than mining. “A lot of people assume most explosives are used in mining,” Taylor explains. “A lot are, but there are an awful lot of other uses. Nordex has never really previously had the products or the equipment to actively go after that market. Our ultimate goal is to end up with 50 percent of our revenues from mining and 50 percent from the quarry construction market.”

Nordex Explosives over the last few years has focused on developing its own complete line of explosive products and the equipment and services to support them. “This was a pretty small company up until recently that had to spend a lot of time and resources in acquiring or developing our own technology and products,” Taylor says. “That could be anything from underground loading systems to specialty trucks on the surface to specially formulated, exclusive products.”

Ready to Rumble
The company’s approach is similar to a team that after spring training finally bursts onto the field in the regular season. “We’ve had cautious growth up until this point, because we really were still in the development stages,” Taylor reveals. “Now we think we’re coming to the end of those development stages and moving more into the exposure and marketing of our products.”

The explosives industry is highly regulated, so Nordex has spent much time and energy to ensure that its products and services meet those regulations. “Our plan was that by the end of 2013, we would have positioned ourselves with all things in place to more aggressively go after a larger market share in 2014,” Taylor says.

The company’s new Buttbuster production line achieved close to full production capabilities in the first quarter of 2014. “We are just in the process of launching a major marketing initiative to make everybody aware that the products are now available in Canada,” he announces.

Nordex Explosives has achieved seven consecutive quarters of revenue growth, and Taylor expects the company’s revenues to double in the next two to three years. Nordex has only a small percentage of the market so far. “It’s actually quite a large market with literally a handful of manufacturers in North America,” Taylor points out. “So the opportunity for Nordex to grow and gain marketshare we believe is considerable.”