Back to Profile Gallery > Norshore Holding AS

Norshore was established in 2007 and is an independent Norwegian Offshore company based in Bergen, Norway.

The company has developed a top-hole drilling concept, using field proven drilling technology from an offshore support vessel (OSV). Construction of the vessel began following research into the possibility of designing a drilling vessel at a significantly lower cost than a normal semi-submersible rig. The unique Norshore drilling concept has many advantages for its clients, enabling the operator to perform activities from a vessel far smaller than a standard drilling rig or drillship, but with the same basic capabilities.

The vessel, Norshore Atlantic, which was delivered early 2014 has already completed one contract and is currently working on the second contract, for Shell in Malaysia. “Our first project was with BlueSky on the Langsa Field in Indonesia in a combination of ROV inspection and well intervention work on two subsea wells,” says Arnstein Hernes, CFO. The well intervention work proved successful for the client with a substantial increase in oil. The drilling and lifting concept makes the unit ideal for riserless light well intervention, as well as well intervention with drill pipe risers. “From this unique, multi-function vessel we can undertake numerous operations extending to riserless plug and abandonment operations and top-hole drilling,” he adds.

The Norshore units are equally as efficient as large semi-submersible rigs in the top-hole sections of a well. The unit has a large deck and mud capacity, and furthermore is prepared for a riserless mud recovery system; in addition the DP3 system will lessen the need for support vessels. Adding a reduced mobilisation time and a high capacity subsea crane this will give the clients a very efficient operation and an earlier start-up of production on fields, as well as increased utilisation elsewhere of its existing rig fleet. “Riserless drilling is one of the main focus areas for our company, using the concept to drill the top-hole sections and pre-install the wellheads. We can do the initial work so that a drilling rig can come in after to finish the well down to the reservoir. However, with our setup, we can in many cases replace rigs and drill complete wells down to the reservoir utilising the BOP stack and riserless mud return system,” explains Arnstein.

Operational to a water depth of 500 metres, in many cases this method will be less costly than using a jack-up or anchored semi-submersible rig for shallow water fields. The lifting capability of the drilling derrick combined with the AHC offshore cranes makes the vessel very flexible and versatile for subsea construction work. The main deck is equipped with a skidding system that allows safe deck handling before deployment through the moonpool. Larger units may also be deployed over the side by use of the offshore crane. It is also possible to carry out wet towing of large modules hanging under the drilling derrick in safe distance above seabed. 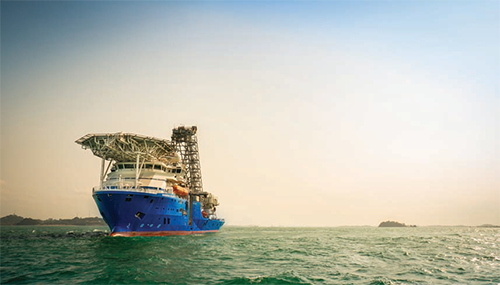 Currently, Norshore is the only company that operates a multi-functional vessel, although competitors are beginning to recognise the advantages, contracting shipyards to follow suit with newbuild contracts. Commenting, Arnstein points out: “The fact that the rest of the industry is replicating a similar design highlights that we have a concept designed for the future market. We can do the same operations as a big rig but with much lower construction and operation costs, enabling us to offer competitive day rates.” In September 2014 Norshore began operations for Shell on the Malikai Field in Malaysia. The scope of the work includes the drilling of top holes, with an estimated programme of between 75 to 130 days.

The first few steps of a new business are always critical, and for Arnstein the importance of having more than one leg to stand on equated to the necessity to more vessels: “The challenge as a young company is to be able to raise the necessary external funding without having long-term contracts in place. Our shareholders have come forward with a high level of equity, which has improved our capacity to achieve this valuable growth.” As customers and competitors alike begin to recognise the advantages of the efficient and environmentally friendly multi-purpose drilling vessel, Norshore remains one step ahead. It has a shipbuilding contract in place with Yantai CIMC Raffles in China for the construction of the drillship Norshore Pacific, including three optional vessels. The vessel, which is the same design as Norshore Atlantic, but with an increased 40-metre length, is due for delivery in Q4 2016.

“Operationally, we have a three-year framework agreement with Shell and this holds future opportunities for our increasing fleet over the next few years, coupled with potential contracts both in South East Asia, West Africa and elsewhere. We believe there is a growing demand and as the industry becomes more aware of our cost effective solution this will accelerate. Due to the nature of the vessel, opportunities exist for the business to undertake more activities, which will become increasingly important in the period going forward.

“Beyond the capabilities of the vessel, the workforce aboard and within our company is also of utmost importance. We operate the vessels ourselves, employing a management structure controlling the operation. We also recognise the value of using local content from the countries in which we are working, and recruiting labour from those nations as applicable. It is important for us to be a fully integrated company, not having someone else operating the vessels for us,” he adds.

Looking further ahead, Arnstein provides an insight into the direction of the business over the next five years: “Our plan has always been to grow the company into a business with five vessels, an aim that is achievable by 2019 in line with the options we have with CIMC Raffles. Of course our strategy is linked to the contract coverage because we do not want to have more than one vessel uncontracted at each time. The growth depends on securing the right level of contracts and the completion of each one with success. In the future years, the ultimate goal of the stakeholders is for the business to become a listed company.”